Lafayette defeated LaSalle, 4-3, in the semifinal.

“We had a number of leading scorers graduate last year, so we were coming into the season knowing that we wouldn’t be starting out at the same level,” says Gaglione, an economics and international affairs double major from Manalapan, N.J. “But we got a few new players, and things came together. Everyone bought into the system and was committed to what needed to be done. That made all the difference. We may not have had the best skills at the beginning, but we were all willing to work really hard and work together.” 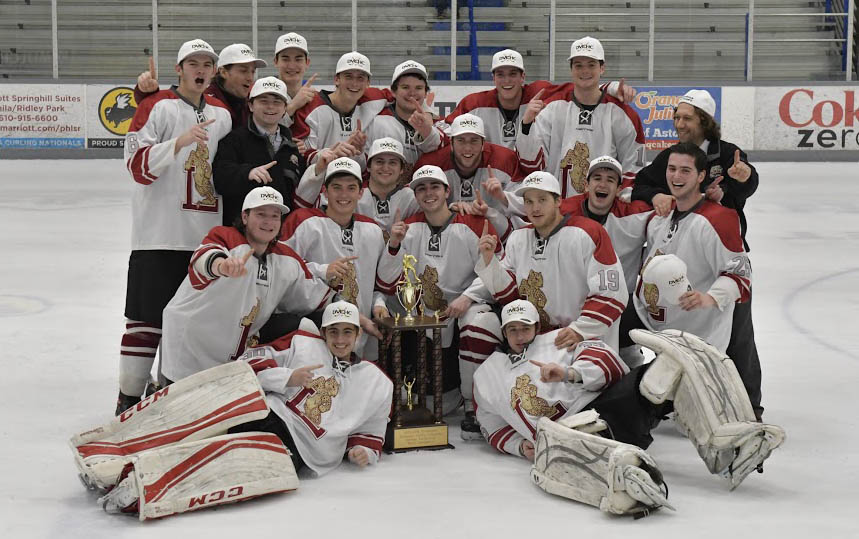 Susquehanna was an unexpected opponent in the championship game. It pulled off a surprise win, 6-5, against Bloomsburg in the semifinals.

“We were so focused on playing Bloomsburg—that’s who we anticipated would win,” says Steffan Kollevoll, the team’s head coach since 2012. “We had beaten Susquehanna handily in the past, and so I was a little concerned that the team might not go in with the right mindset. I didn’t want them to assume it would be an easy win. But the captains and leaders on the team recognized that and got the team in the right headspace.”

The hockey players are committed and passionate. Hockey season runs from September through February, during which time students have skating practice twice a week at Steel Ice Center in Bethlehem (ice time is 9:30-10:30 p.m.) and two cross-training workouts (running or lifting) a week. Plus, weekend games.

In addition to the physical demands, students are heavily involved in management of the team. They schedule games, manage the budget, and arrange bus transportation to ice rinks.

“It’s hugely personally fulfilling,” Gaglione says. “You are extremely invested in the team. It goes beyond just practicing and playing. You want students after you to have a really strong program to be part of. That’s what the guys ahead of us wanted for us, and that’s what we want to pass on.”

Kollevoll sees this championship win as an opportunity for Lafayette to be a leader in the Delaware Valley Collegiate Hockey Conference.

“My hope is that this win gets them hungry for more successes,” he says. “But what I really want to focus on next year is building upon the reputation we are establishing as a good, strong, consistent team. We want to be serious about our program and be an example for others to follow. Helping the entire league to grow and establish credibility will benefit everyone.”