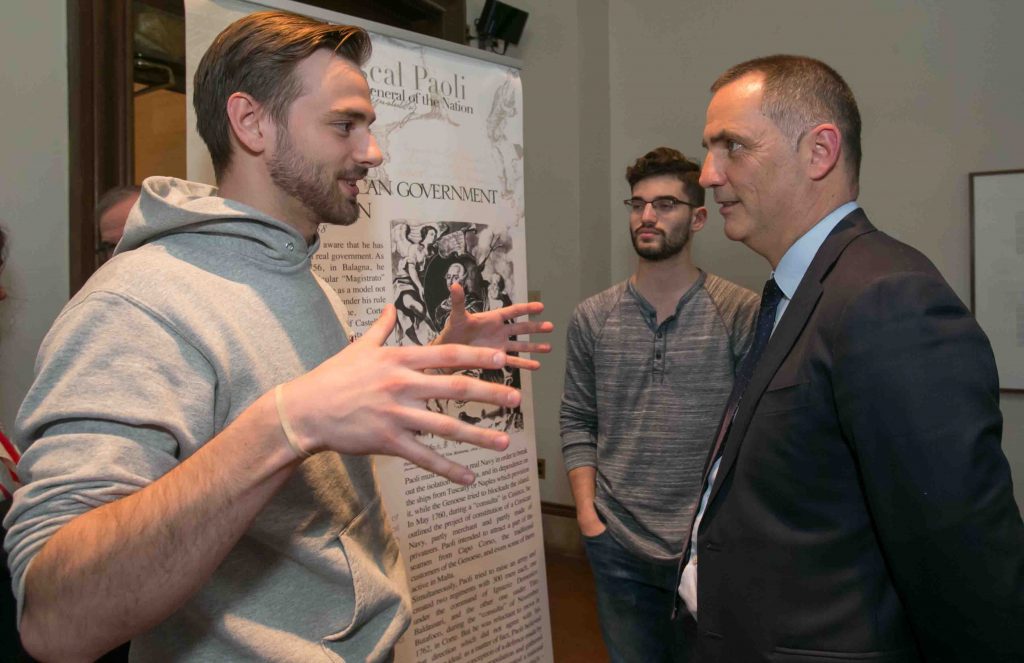 A student talks with Gilles Siméoni, president of the Corsican Executive Council.

Gilles Siméoni, president of the Corsican Executive Council, came thousands of miles to deliver a gift to Lafayette College last month, the culmination of a saga spanning hundreds of years.

And like all good stories, it begins in a bar.

It was in the 18th century just before the American colonies declared their independence from Great Britain. One St. Patrick’s Day, patrons at the then-unnamed tavern recently opened by Joshua Evans in what is today Chester County in eastern Pennsylvania were offering up a few toasts.

At the 45th and final pint-raising, one of the drinkers—no one is quite sure who it was—lifted a glass and offered a drink in honor of Gen. Pasquale Paoli of the island of Corsica. 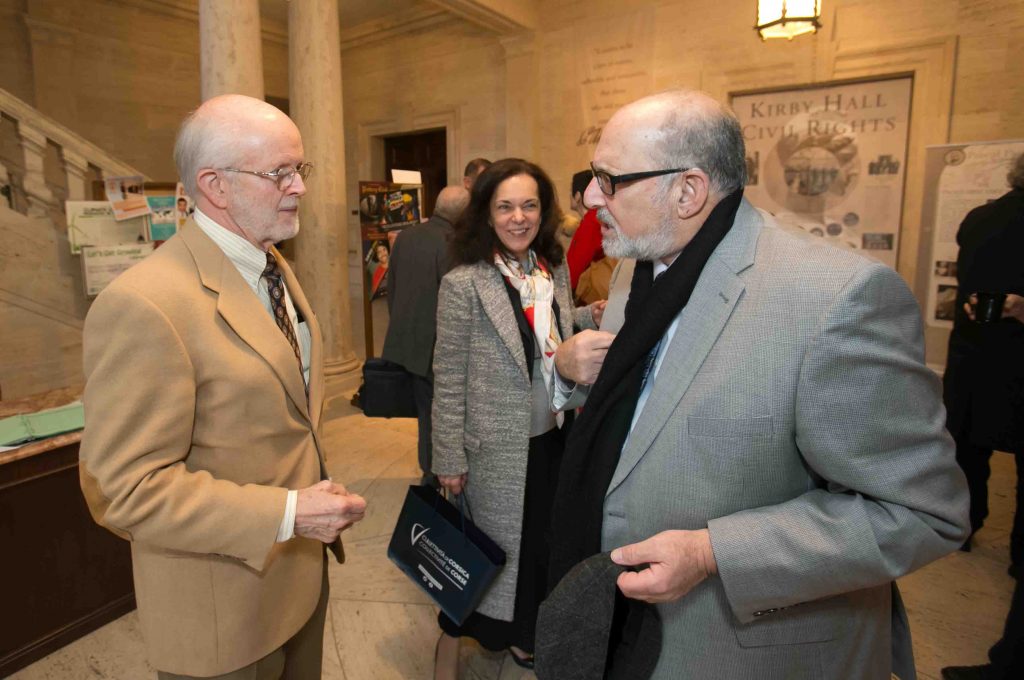 Paoli was world-renowned. He’d written the first democratic constitution in Europe, served as the Corsican chief executive, and led the resistance against the French in 1768.

Evans decided to name his eastern Pennsylvania tavern after the famous man. Eventually, the small town that coalesced around the tavern came to be known as Paoli. A Revolutionary War battle in fall 1777 became its claim to fame.

Two and a half centuries later, the census-designated area still goes by its Corsican name. With a population of about 5,500, it is the most populous place in the U.S. named after Paoli, says Ed Auble ’61, a financial adviser and two-time president of the Paoli Business and Professional Association.

And that’s why, since 1966, representatives of Corsica have been visiting Paoli. 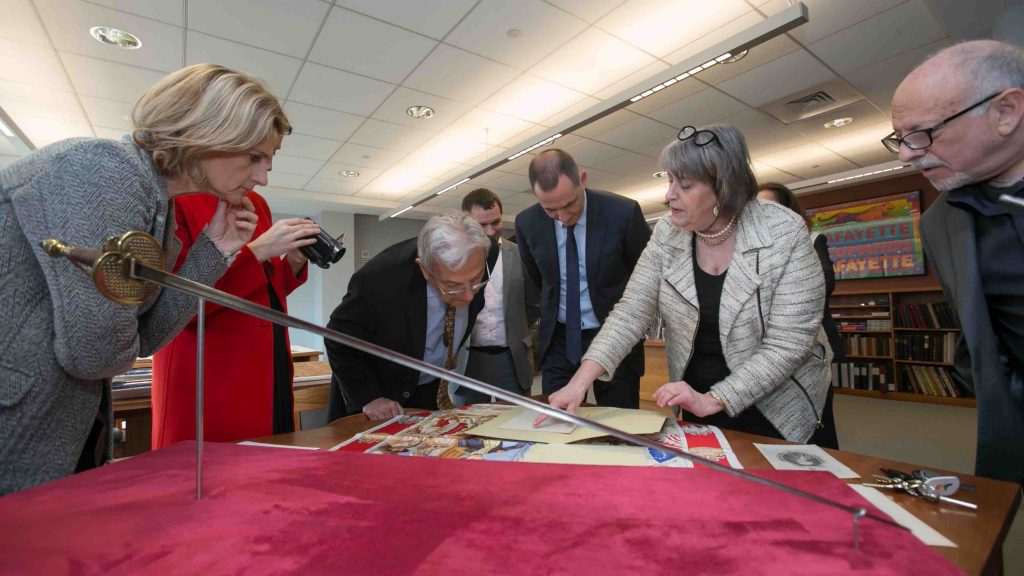 Auble moved to the Philadelphia area in 1981. He graduated from Lafayette 20 years earlier with a major in business administration. Commissioned as a U.S. Naval officer, he earned his wings as a naval aviator in 1967. He graduated from Thunderbird Graduate School of International Management in 1972 and joined American International Group (AIG), a job that took him around the world.

Auble’s connection with Siméoni began in 2017.  The leadership of the country wanted to visit Paoli, Pa., but couldn’t attend because of French elections. So instead, they invited Auble to Corsica.

The French island rises in mountains from the center of the Mediterranean, nearly equidistant from the coastlines of Italy and France.

“When I go to bed at night,” Siméoni told a gathering of students and faculty members during his visit to campus, “I can see the lights of the cars in front of my house of the Elba Island, which is Italian. I can’t see the French lights.” 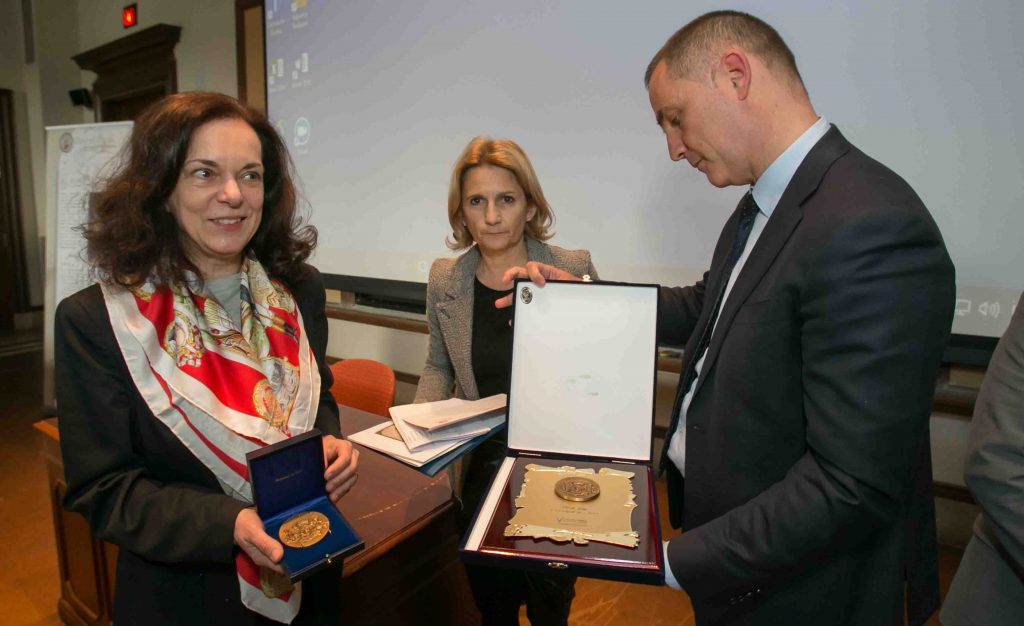 Members of the Corsican delegation hold a medal and citation that they gave to Lafayette.

Siméoni and other Corsicans have been seeking greater control of their own affairs from France. The island, a top tourist destination, has fallen prey to real-estate speculators from the French mainland, driving up costs for the locals, who have little recourse, Siméoni says.

During Auble’s visit, Siméoni and others asked the U.S. businessman for advice about ways to improve economic and cultural ties with the U.S. Subsequently, Auble, working with others from the Paoli business association, helped arrange the April 2018 visit to Paoli.

Siméoni and his entourage timed the Lafayette portion of their visit to coincide with the 293rd anniversary of Paoli’s birth. The delegation donated ornate posters detailing the life of Paoli.