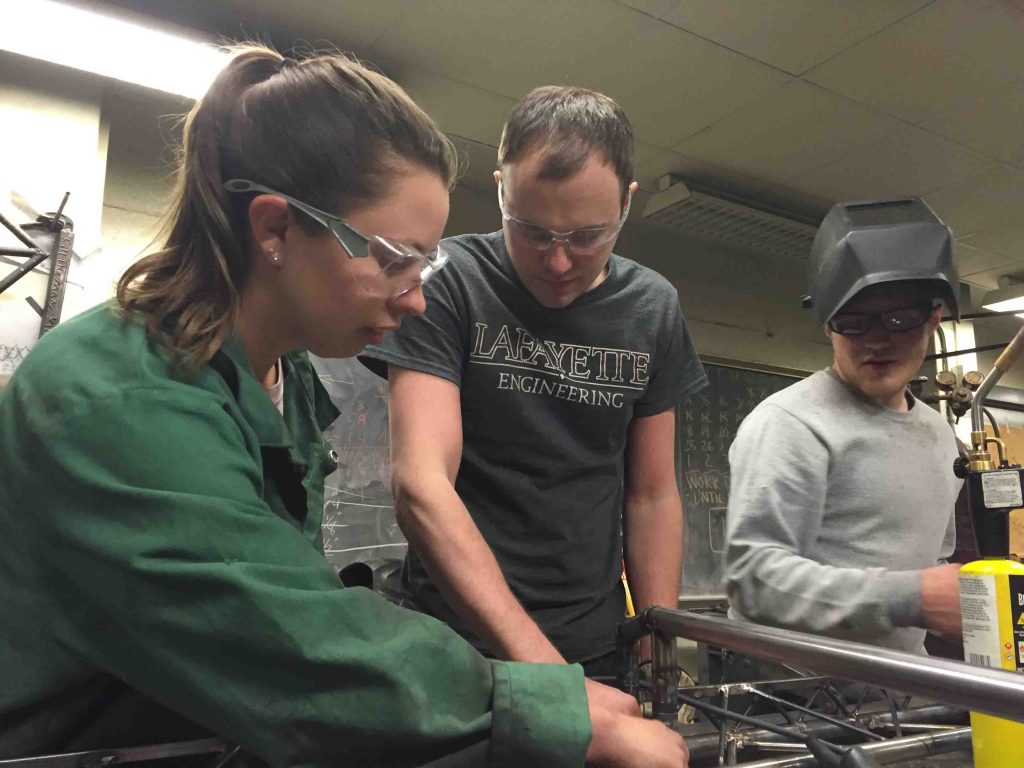 Story and photos by Bryan Hay

Nine Lafayette civil and environmental engineering seniors are preparing for the 2018 National Students Steel Bridge Competition, which will be held May 25-26 at University of Illinois.

Lafayette is focused on claiming its first national championship, coming within a razor’s edge last year and placing in the top 10 numerous times over the last decade against leading engineering universities across North America and China.

To get that far each time requires hundreds of analytical studies to undergird the design strategy and some good-natured espionage, an accepted part of the spirited preparations for the national competition. For example, bridge team members keep an eye on social media accounts of teams Lafayette considers its fiercest competitors. 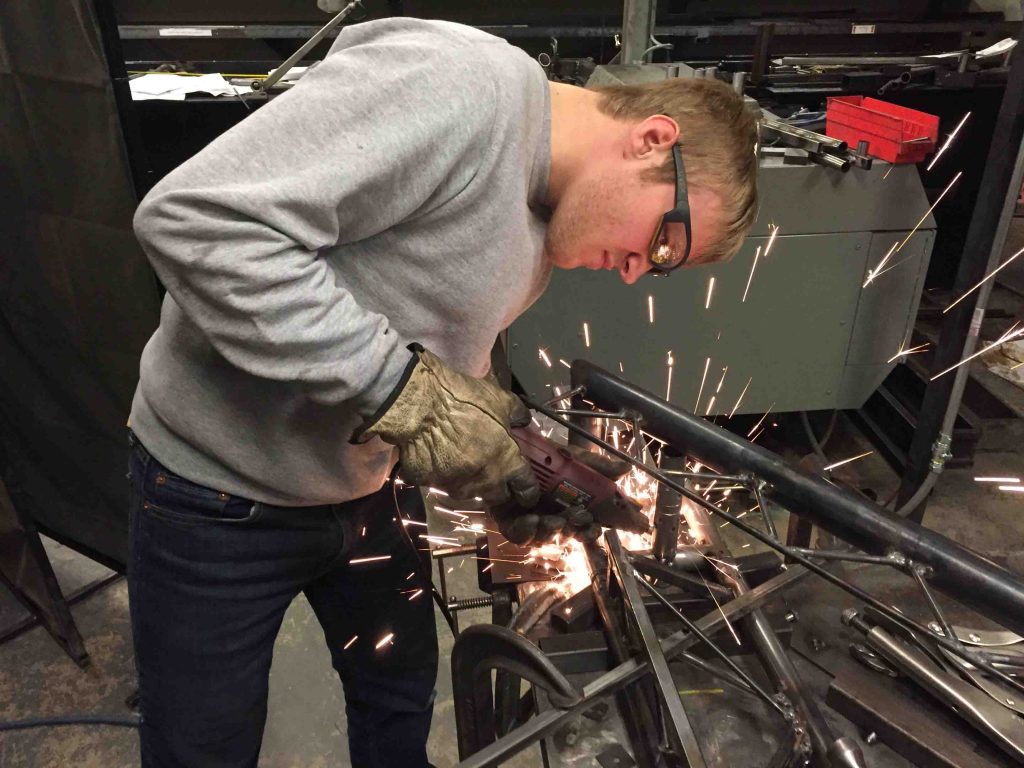 “When Aunt Martha posts a photo on Facebook or Instagram of her nephew posing with the bridge built by one of the top teams, we’ll pause to take a close look at that,” says Steve Kurtz, bridge team adviser and associate professor of civil and environmental engineering.

“When you can critique the work of others, you’ve reached the pinnacle,” he says.

The Steel Bridge Competition is an engineering design contest that attracts more than 250 engineering schools from the U.S., Canada, Mexico, and China.  Each team designs and fabricates a 20-foot-long steel bridge that is made from size-limited parts.  At the competition, teams must assemble their bridges as rapidly as possible, over a mock river that cannot be crossed.

Subsequently, the bridge must safely support a 2,500-pound load. The objective of the competition is to produce a bridge that is lightweight, stiff (deforms as little as possible), and rapidly constructible. The winning team is determined by an equation that considers each of these three parameters.

“You will always have those three measurables,” Kurtz says. “There’s nothing subjective about the competition. There is very little that you gain from your past, which is probably the No. 1 reason why I consider this the best engineering competition. Others are inherently stale because your success is largely dependent upon the experience of the past five or 20 years.” 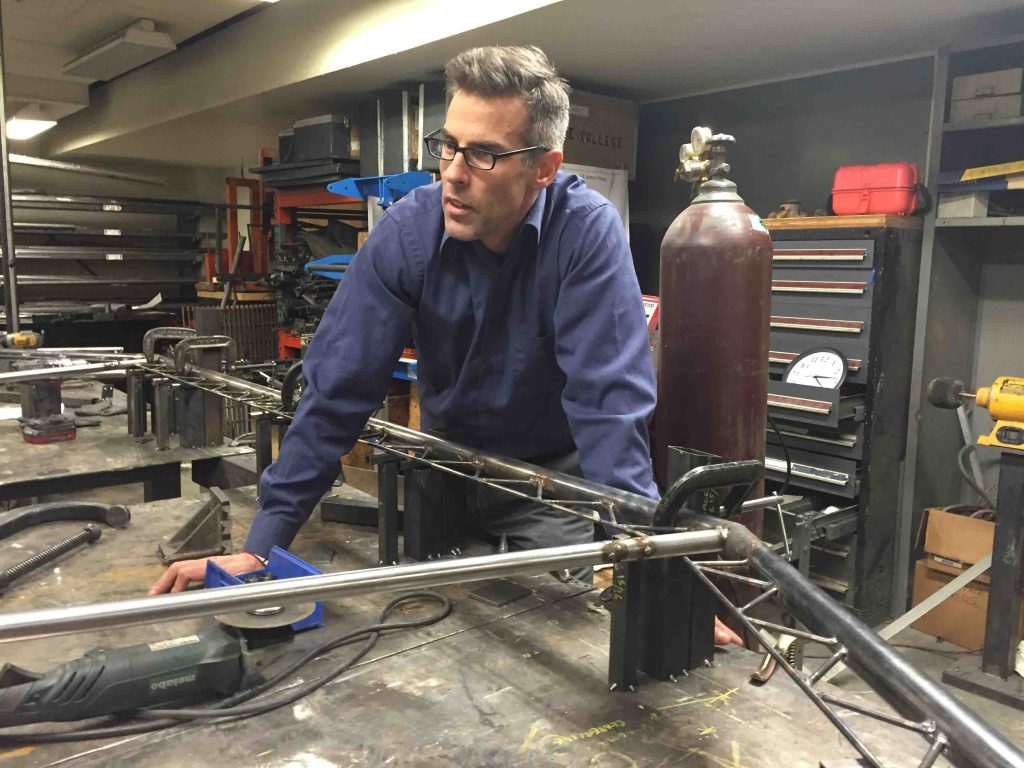 The design team began its work in August with conceptual design studies, completing dozens of computer-based case studies and parametric studies by the end of September, enabling the selection of a preliminary design concept by the beginning of October.  This design concept was developed into the team’s “fall bridge.”

The team fabricated this fall bridge, completing its work in mid-November, in time for the annual Lafayette-Lehigh Steel Bridge Presentation.  An annual tradition since 2007, the seniors present their analysis, design, and physical bridge to a group of steel bridge alumni on the night before the football game.

After receiving constructive feedback from the alumni and physically evaluating the fall bridge in a variety of ways, the team undertook a complete redesign of the bridge, rethinking every aspect of the design. The result was an entirely new design.  Fabrication of the spring bridge commenced in mid-February and completed at the end of March.

Since winning the regional competition, the team has focused its efforts on fine-tuning the construction sequence so that the bridge may be built as quickly as possible. 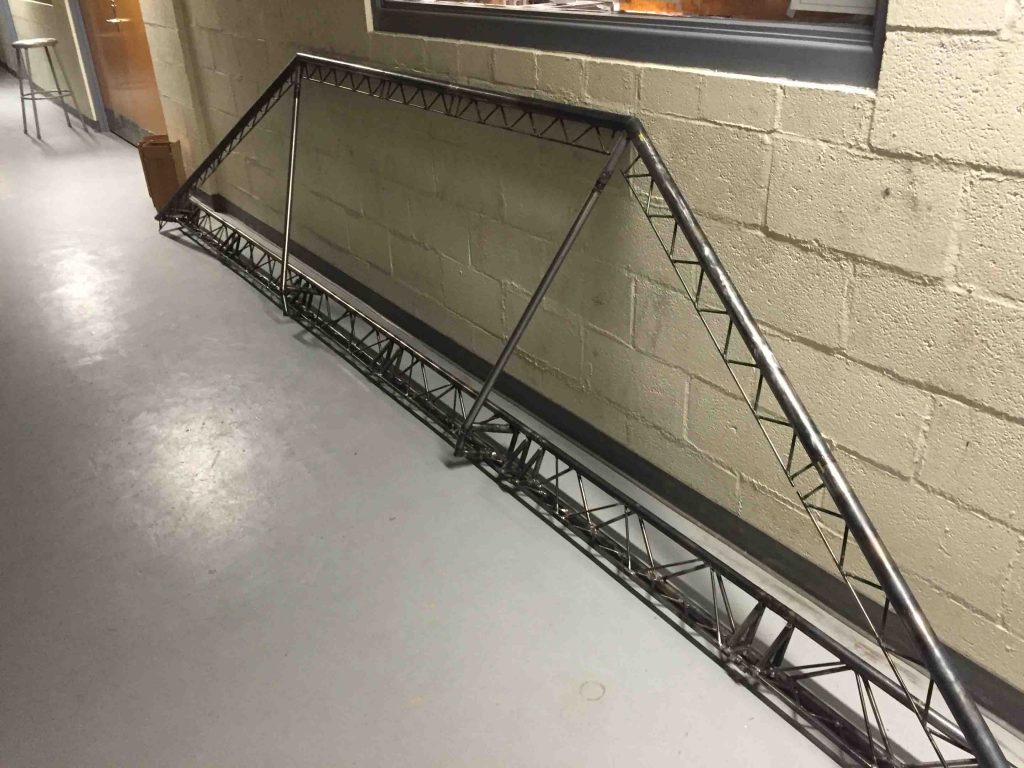 “Last year’s team built its 36-member bridge in just over three minutes, using three builders,” Shoemaker says. “This year’s bridge has the same number of members, but the construction rules are different and much more challenging this year, so it will be hard to match last year’s building speed.”

Lafayette developed some innovative tools, so the team doesn’t expect to be far off that mark.

“We took second place in 2017. That’s a great result that we are proud of, but our team’s attitude is that the only place we are interested in is first place,” Nicholas says.

Since 2007, Lafayette has had seven top 10 national finishes. With recent finishes of second place in 2017 and fourth place in 2016, this year’s team is hoping to bring home Lafayette’s first steel bridge national championship in a matter of weeks.