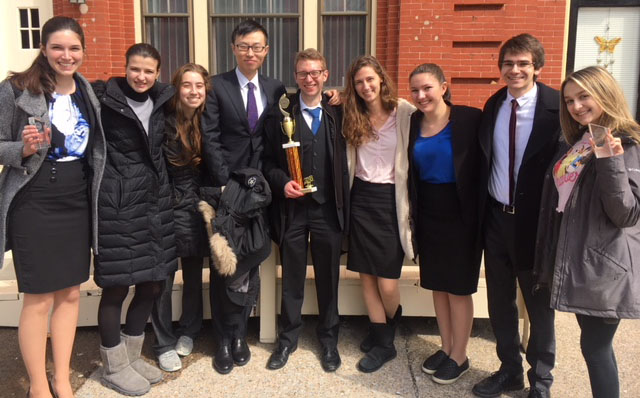 In April, Lafayette’s mock trial team traveled to Minneapolis to compete in the American Mock Trial Association National Tournament. Simply being there was considered a victory. It was the second time in the program’s 20-year history that it qualified for nationals. Only 48 of 700 teams in the nation qualified.

Expectations for a top finish were low. Odds against them were high.

So much so that prior to the tournament, a mock-trial analytics group predicted that the team would win zero of the 12 potential ballots and finish 48th of the 48 schools competing.

Team members could’ve let that prediction intimidate and immobilize them. Instead, it motivated them.

The team received details of the case it would need to argue at nationals three weeks ahead of the competition. During that time, the team of nine students met daily, working together for hours to dissect and prepare the case, study the affidavits, develop a defense, and rehearse performances. Mock trial teams aren’t only judged on their ability to present arguments for a plaintiff’s innocence or guilt. They are judged on how convincingly they portray prosecutors, defense attorneys, and witnesses using federal rules of evidence and procedure. Scores reflect the content and compelling nature of their opening statements, direct examinations, cross-examinations, and closing statements.

Their preparations paid off. In Minneapolis, Lafayette’s team astounded itself, the competition, and the entire tournament by placing seventh in its division (of 24 teams) and 12th in the entire nation. The team ended with a record of 7-5, making it the most successful season in the College’s history. Over the course of the three-day tournament, Lafayette defeated perennial contenders Northwood, Patrick Henry, and Cornell. Entering the fourth, and final, round of the tournament, Lafayette was 7-2 and one of only six teams left in contention for a national championship.

“I’m extremely proud of the team’s accomplishments this year,” says coach Aaron Freedman ’15, who joined the team as a policy studies student in 2013 and returned this past year to coach. “Lafayette faced stiff competition and was frequently approached by coaches and competitors from other schools who recognized the team’s incredible run and inspirational story.”

It’s also particularly meaningful for graduating class team members; it’s a momentous and rewarding way to cap off their time in the program.

“Mock trial has been an extremely valuable experience for me,” says Phoebe Silos ’18, government & law and philosophy double major, who will be attending law school in the fall. “It’s really helped me develop strong public-speaking and critical-thinking skills. It’s really built my confidence. It’s also a lot of fun. We spend a lot of time together talking about strategy and building our cases. We have great team camaraderie. We spend a lot of time together and develop strong bonds.”

Freedman says he hopes the strong performance will inspire those returning next year and perhaps entice newcomers to join.

“We were very fortunate to have a strong group of first- and second-year members who really showed their potential at nationals, including all-American Molly Fawcett ’21,” he says. “I have no doubt that we will continue to turn heads.”