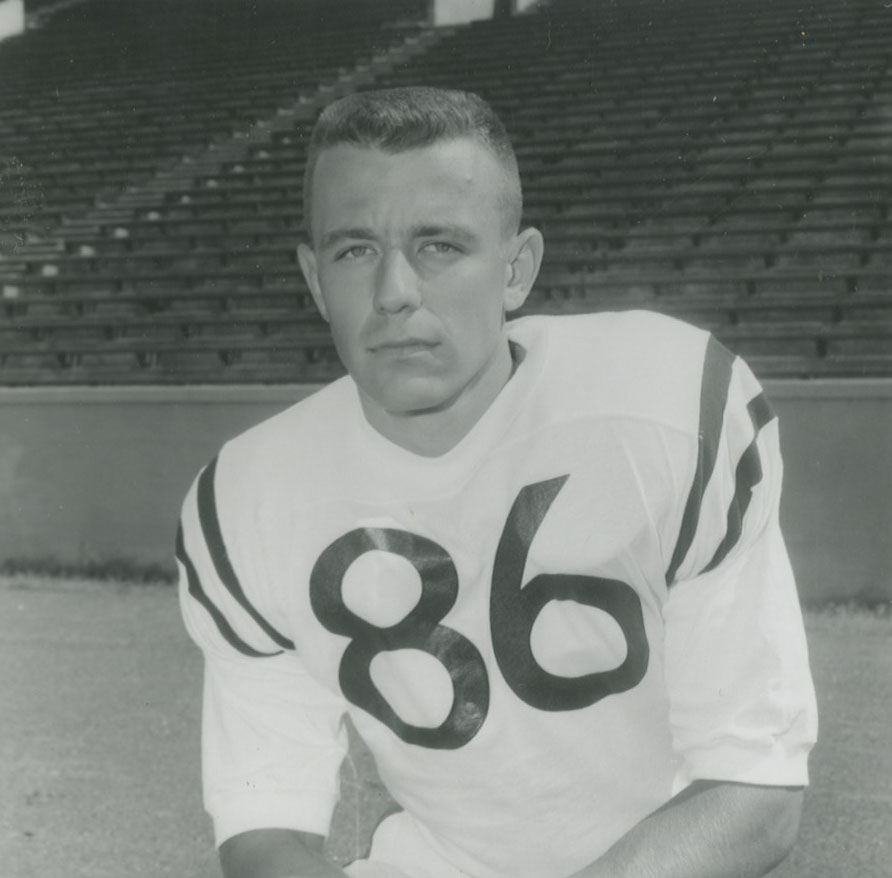 The Rockwell Integrated Sciences Center will have an outdoor plaza named for John Darr ’66, who played football at Lafayette.

John Darr ’66 and his Phi Delta Theta brothers wanted to find a fitting way to say thanks to their friend and brother, S. Kent Rockwell ’66, for his generosity to Lafayette College.

“My initial thought was to get the other brothers to recognize Kent for his generosity to the College and his long service as a trustee,” says Darr. He said they thought about naming a classroom in the Rockwell Integrated Sciences Center, but somehow that didn’t seem like the best fit because most of them were liberal arts students.

And then someone made a suggestion for naming the outdoor plaza at the new building, says Darr, who wrote a check for half the financial goal and was about to challenge other brothers to contribute. That’s when his former roommate stepped in.

Rockwell supplemented the amount brothers donated to meet the College’s goal, but he and the brothers decided to name it John Darr Plaza instead of Rockwell Plaza.

“With this damned disease I’ve contracted, which is progressive and terminal, the sentiments from my Lafayette friends have been really, really overwhelming and humbling,” says Darr, who’s battling amyotrophic lateral sclerosis (ALS), also known as Lou Gehrig’s disease. “And this is a primary case of that.”

He says there isn’t enough time in a day for him to fully explain the depth of the friendships established at Lafayette.

“All of my fraternity brothers, every single one of them, have been—and I mean this to the most literal extent I can make it—like a brother, a real brother,” Darr says. “That is the bond. We grew up in a four-year period as a group of classmates who loved each other, who got along very well, and enjoyed a common bond and sustained a friendship for over 50 years.”

Darr had already signed up to attend college elsewhere on a football scholarship when he was persuaded to come to Lafayette by the football coach.

“I remember him saying, ‘At least come and look at the campus in early April,’” says Darr, who grew up in Indiana, Pa., and describes himself as a Pittsburgh Steelers fan “through and through.”

After a stay at the Phi Delt house on his first Lafayette visit one weekend, a week after a social trip to the Poconos, his mind was changed. “The guys in that fraternity house were so nice,” he says.

“Not only did I ultimately pledge there, I became the president,” says Darr, who played football at Lafayette and was part of the 100th anniversary game in 1964 with Lehigh at Fisher Field, which ended in a 6-6 tie.

After Lafayette, he went to law school but was reclassified by his draft board five times in his first semester. Darr then qualified for Officer Candidate School in the Navy and served for more than two years in the Vietnam War aboard the USS Oklahoma City, flagship of the 7th Fleet. After his military service, his career spanned more than 45 years in capital markets and financial management, including serving as chief executive officer and managing director at Federal Home Loan Bank System’s Office of Finance and executive vice president of administration and finance of the Student Loan Marketing Association, among other positions.

Darr returned to Pennsylvania to work in a commercial bank bond department in Pittsburgh. He then went on to Federal Home Loan Bank of San Francisco in the mid-1970s as treasurer.

Darr managed mortgage finance at a Wall Street investment bank and started a money management firm. He has had numerous opportunities over the years to serve as director of both nonprofit and corporate organizations, including his service on the board of directors of Manna Inc., a faith-based organization in Washington, D.C., that helps low- and moderate-income people acquire quality housing and develops blighted neighborhoods, and on the board of directors of Federal Home Loan Bank of Pittsburgh.

Rockwell and Darr lived in Kirby House, not far from Rockwell Integrated Sciences Center, named for Rockwell and set to open next year, in their freshman year and became roommates in Gates Hall their sophomore year. As young men, a solid friendship developed, one that has lasted, strengthened, and matured over the years.

They pledged Phi Delta Theta in spring of their freshman year, along with Bill Friesell and Dave Brown, lifelong friends of Rockwell’s from Edgewood, Pa.

“There were, as I recall, 13 others in our pledge class,” Rockwell says.

“Being at an all-male school at the time, we were focused on more fraternal activities, and most of us participated in some elements of the athletic programs at Lafayette. The camaraderie developed in this environment was quite positive and was continued as we went off to different graduate schools and the services.

“Many of us married girls we had brought to Lafayette during our time there, and so the spouses knew other spouses, which accentuated the reason to remain in close touch,” he adds. “As we diversified our home locations and careers, we still found reasons to get together for golfing weekends and other outdoor activities for many years, to a point at which it became an annual function that we have tried to maintain.”

When Darr was diagnosed with ALS, they responded and rallied around their close friend and brother.

“It was John’s idea and fine gift to the College that initiated the Darr Plaza concept,” Rockwell says. “When we all heard of it we wanted to jointly share in this effort with him. We collectively anticipated as best we could, and the College responded with a plaque for all of the brothers who did so to be displayed on the Darr Plaza entry wall.”

Darr, who lives in Rehoboth Beach, Del., says the friendships were strong from the start and have only grown stronger over time. “Just a wonderful community,” he says, adding, “I’m okay with what they’re doing as long as the brothers are commemorated for their contributions.”

The inscription on the plaza plaque says it all. “The John K. Darr ’66 Plaza honors the long-standing generosity with which John Darr ’66 has supported Lafayette College and celebrates his friendship with S. Kent Rockwell ’66 and their Phi Delta Theta brothers. Collectively, this tribute will have a lasting impact on Lafayette College and future generations, focused on an innovative and interdisciplinary education.”

Rockwell says the shared lives from the Class of 1966 have ebbed and flowed in different directions over the years, but the bonds of fraternal friendship have remained constant.

“It’s given each of us a form of support,” he says. “I guess that is what the concept of fraternity should be and has been for the Phi Delt Class of ’66.”