By Bryan Hay and Bill Landauer

As first-generation college students, many of them didn’t know what to expect when they entered a college campus for the first time; college life simply wasn’t part of the family conversation growing up.

For some, how to register for a class is a daunting challenge. First gens often have to figure things out for themselves and find their own path to success.

Here are stories shared by some of the first gens who graduated May 19; they all found a strong support system at Lafayette, one that will likely last a lifetime. 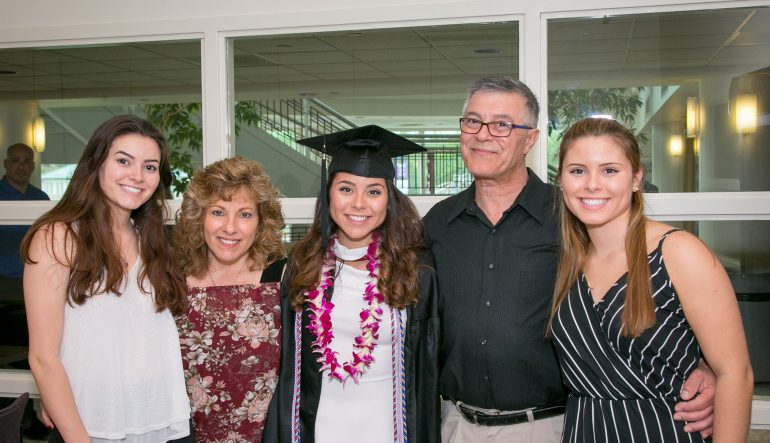 “I feel like a pioneer for my sister, Amanda ’21. I’m humbled and grateful for an opportunity that not every kid has. A Lafayette education was the biggest blessing to my family, and this was made possible with their help and financial aid. Lafayette as an institution values first-gen students and understands the value of being a pioneer for your family. They take the Lafayette motto very seriously and use it as a compass to point to the importance of this journey.”

A parent’s view: “Lafayette has blessed us twice with Nicole and Amanda and the financial aid they have received,” says their father, John. “It’s an opportunity that doesn’t come to everybody.”

Adds their mom, Margaret, “It’s the best day of our lives.”

What’s next? “My goal is to become a physician’s assistant, but in the meantime I’m continuing my internship with S.H.E. Summit and working with Fortune 500 companies to help advance women and gender equality.” 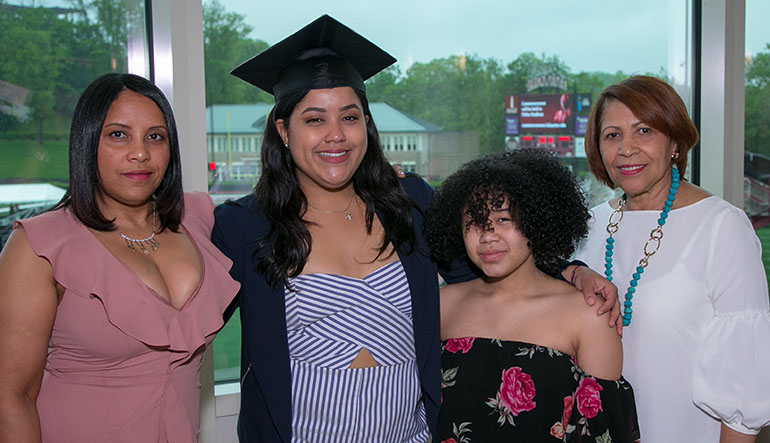 “I feel like I’m setting a new example, not only for myself but for my family. This is not just for me. I could be a role model for my sister and others. I’m setting the path for them. Lafayette has been a second home—friends made here and professors have become some of the most important people in my life. I’ve formed good relationships with people at Lafayette; I’m not the same person I was when I came in.”

Family view: “I’m proud of my daughter and very happy for her because she did it,” says Matos’ mother, Kenia. “She’s very, very smart, and I love her. I was worried when she came to Lafayette because she was far from home. But afterward she was doing well and made friends. The Lafayette campus was very good for her.”

What’s next? “I’m working as a paralegal at New York Legal Assistance Group, which provides legal services to low-income people. I plan to go to law school.” 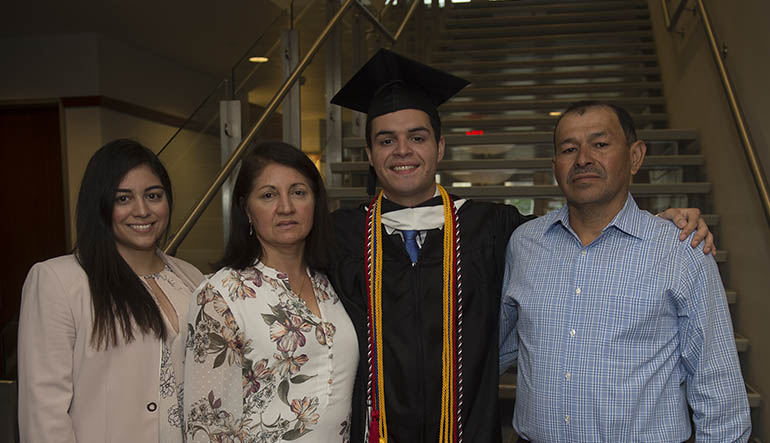 “Growing up, my parents always told me I’d go to college. I never expected to get to go to a place like this. Being at Lafayette allowed me to grow tremendously as a person. It’s taught me so much, and it’s brought me so many opportunities. The biggest thing for sure is my personal growth here, not only as a scholar but also professional. And building personal relationships here with students and professors has been amazing. Another thing I’m very proud about is the diversity of my friend group. Meeting people from different places, different backgrounds, ideologies. That’s also influenced me.”

Family view: Gregorio and Estella Miranda moved to the U.S. from El Salvador. Both had minimal schooling and wanted more for their children. Yenny Miranda, Jeffrey’s older sister, graduated from University of Baltimore in 2012.

What’s next? “I’m going to D.C. to work for Deloitte Consulting. Lafayette played a huge role. The career coach got the ball rolling on that.” 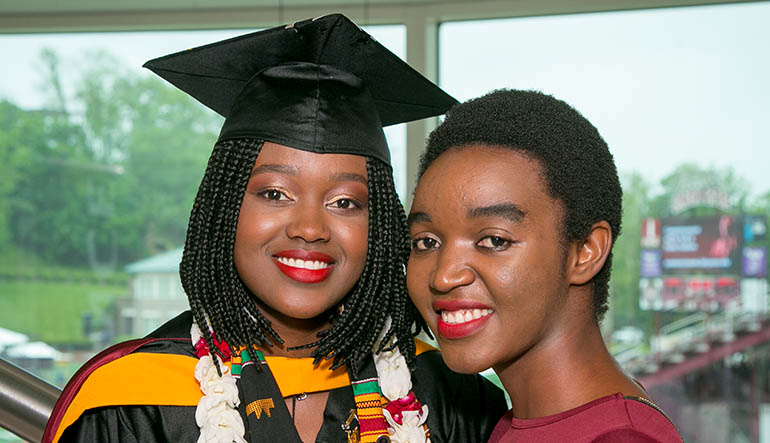 “Four years have gone by very fast, but the time was supported by my parents and mentors. Even with my parents far away and not fully understanding the day-to-day functions of college life, they were always willing to listen and give me encouragement. I got super closer with my mom and dad and siblings being far away from them. And I got closer to my country; there are so few Rwandans here and I felt the need to correct the widely held notion that Rwanda is still a war-torn country. I feel a need to educate people about the current state of the country. I learned so much about my country and myself as well.

“I grew as a person at Lafayette because of exposure to social issues during a trip to Madagascar and an alternative spring break to Miami to work with sex-trafficking victims. My Lafayette experience shines when I look back and reflect on all of the involvement with different challenges.”

A mentor’s view: “I’m so proud of everything she has accomplished,” says Carol Chang, one of Mizero’s mentors through SHE-CAN, a program that helps provide scholarships to low-income women with top academic rankings from Cambodia and Rwanda. “I’ve known Jocelyn before she was a student. Her journey has been so impressive; she’s come so far, and the journey is only just beginning.”

What’s next? “I plan to return home and go to graduate school and pursue a position in global public health.” 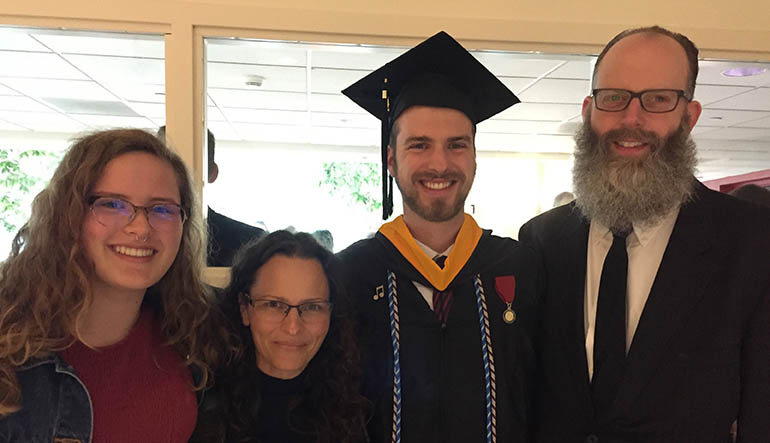 “It hasn’t hit me yet, but having this experience has meant everything to me. I couldn’t have asked for more. Lafayette has given me a chance to explore different fields of research, to work with a professor as a mentor. I’ve been surrounded by a community that cares about each other, and that really helped me as a first-gen student.”

A parent’s view: “We’re very proud and excited for Owen and feel like the opportunities at Lafayette have given him a bigger world to explore,” says his mother, Valerie. “We’re grateful that so many people gave him a chance.”

His dad, Chris, wiping away tears of joy, says, “We’re extremely proud of him. Leaving Owen at Lafayette four years ago was one of the hardest things we’ve ever had to do. But knowing that this was where he wanted to be (as his top college pick) and that he was in good hands helped a lot. We were amazed every time he was home on a break at how much he had matured. We’re eternally grateful to Lafayette for the opportunities that they gave him, and are proud of Owen that he took as many of them as he could. We see only bright things in his future.”

What’s next? “We’ll see where the next opportunity takes me, but I’m interested in the consulting field and data analytics.” 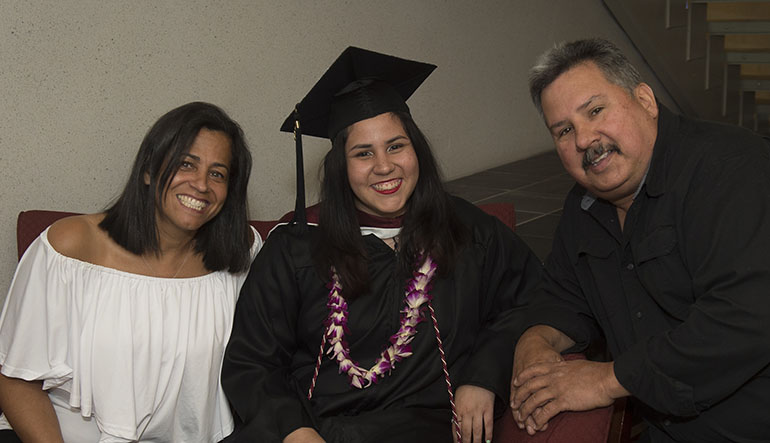 “I think for me it means having everybody’s hopes and dreams kind of embedded in me. Not only am I accomplishing what I want to do, I’m accomplishing what everybody else couldn’t do. So kind of having everybody living through me in a way. I wasn’t just doing it for me, I was doing it for everybody in my family as well. And what it came down to for me, and what it comes down to as a first-generation graduate, is I couldn’t do it by myself. And I didn’t do it by myself. And just the fact that I had my whole family supporting me the entire way. Knowing that their hard work was embedded in me as well.”

Family view: “At Lafayette, she became open to all kinds of different possibilities,” says her mother, Wanda. “She celebrated her 21st birthday at home last year. She brought all her friends from Lafayette. There was such diversity there. There were so many countries in my backyard …”

“We were like the U.N.,” says her father, Jose, laughing.

“She never gave up,” Wanda says.

What’s next? “I’m taking a summer off. I still want to work, but I’m going to have more fun, so I’m going to work at a summer job that I worked in high school. And then after the summer, I’m working at Memorial Sloan Kettering, which is one of the top cancer hospitals in the country. I had an internship with them two years ago, and now I’ll work with them full time. So I’ll work with them two years and then nursing school, but then still be involved in the community on the side. So I’m hoping to be a college mentor and a high school mentor.”