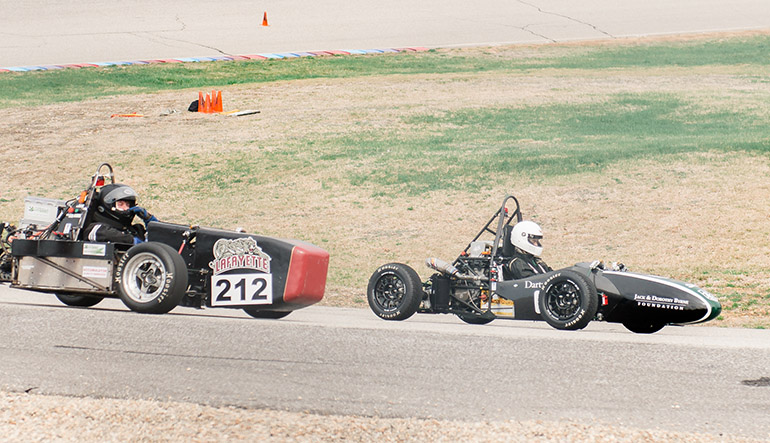 “It’s better than we possibly could have hoped,” said Chris Nadovich, director of laboratories in the electrical and computer engineering department and co-team adviser with Jeff Helm, associate professor and head of mechanical engineering, and John Nestor, professor of electrical and computer engineering. “We finished in fourth place out of 10 teams in the all-electric division, coming in right behind Princeton, Georgia Tech, and University of Vermont. In addition to the fourth-place finish, we won the Fiat-Chrysler Professionalism award.”

Nadovich said students worked around the clock to overcome difficult conditions, making it through all multidisciplinary technical inspections that allowed the team to race on the track in the endurance event over the multi-day competition the first weekend in May.

“We arrived in the rain and conducted the first round of inspections in an unprotected parking lot under a tarp,” he said. “The second day we moved into garages, but it was just as cold and raw.”

Judges identified numerous issues with the car that needed to be corrected, and students had to scramble to disassemble and rework major components. Each time the car was put back together new bugs would emerge that needed to be diagnosed and repaired.

“All of this was accomplished under relentless time pressure,” Nadovich said. “Despite these challenges, it all came together in the end.”

The team managed to complete technical inspections just in time to participate in the endurance event. Because there was a threat of rain, Lafayette team members had a difficult final choice: Should they subject the car to a rain test or risk damaging unprotected electronics?

“We wanted to bring home a working car and decided to decline the rain test,” Nadovich said. “Fortunately, luck was with us. The students hustled the car to the starting line and were ready for the earliest starting time. The rain had not yet arrived, and we were permitted to race on the still dry track.” 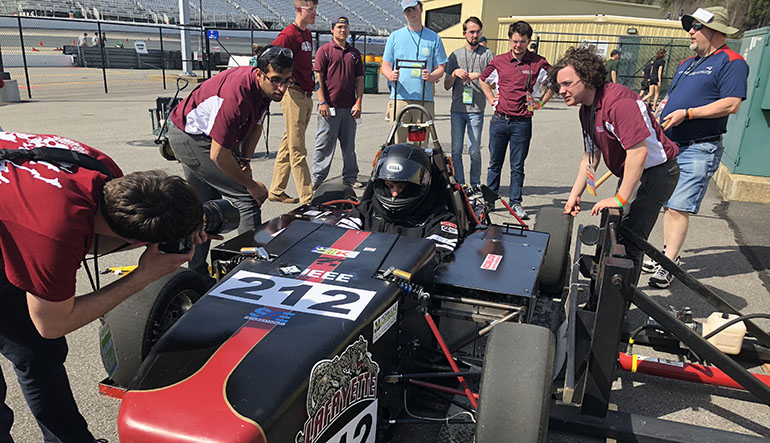 Unfortunately, the car broke down part way through the endurance event, but the team’s point total was high enough for a solid fourth place, besting many well-known engineering schools such as Yale, IIT, and Tufts. Ten schools participated in the all-electric division.

“This is a very satisfying result for our first year reaching the competition,” Nadovich said. “The combined work of about 200 electrical and computer engineering and mechanical engineering students this year and over the past several years is represented in this car.”

In preparation for the competition, the Lafayette team spent long afternoons testing and refining the electric car on the parking lot at Metzgar Fields.

The car is controlled by 34 onboard computers, and its 60 kilowatts of power are fueled by four lithium battery packs, allowing for about a 40-mile capacity. It weighs about 900 pounds. Suited up and strapped in for a test drive the week before the competition, John Alger ’18 (mechanical engineering) responded to a checklist of details from his teammates: voltage check, dashboard displays, cooling system, brakes and throttle. Designed for safety, the car is equipped with emergency stop buttons on both sides of the cockpit.

In near silence, Alger piloted the car around the lot and through a maze of orange pylons; the car’s operation generates almost no noise, with only the crackling sound of gravel being kicked up by the tires. A deliberate spinout tested response of the braking system.

“It’s awesome,” he said after the test run. “It looks like a big missile from the perspective sitting this low. It’s so mesmerizingly quiet when you accelerate. A lot of late nights spent working out various problems have paid off.”

Waseh Ahmad ’18 (electrical and computer engineering) said the cold, soaking rain, stressful conditions for an electric vehicle, and anticipation of putting the electric formula car to the test added to the thrill of the competition.

“It made us anxious but also very excited to show our car,” he said. “That first night, we encountered issues with our car already and ended up taking components back to the hotel, working through the night in making sure everything worked. It was an interesting sight, a lab set up in a hotel room desk.”

The following day presented more challenges as Ahmad kept bouncing between the car and technical inspectors, trying to do as much as possible in helping the team move through inspections while making adjustments to the car.

“Every problem we fixed seemed to spout new problems, and it was then that I felt like giving up,” he said. “But the thought of everyone who had put so much effort into this project kept me going. Some people on the team already had seemed to have lost faith in being able to make it, especially as we stood in a cold garage, with the air blowing and freezing our fingers and feet. But the rest of us pushed forward, knowing we had to try.”

As Tuesday rolled around, things started to look up. 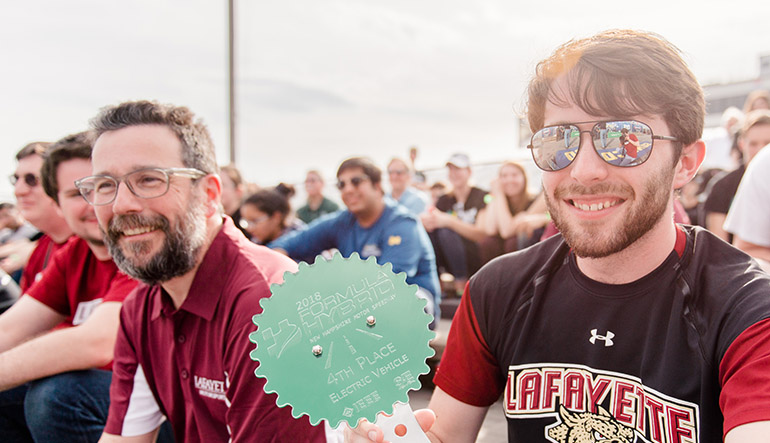 The weather improved and team members started to get past their frustrations by figuring out the issues and developing a more sound method of problem-solving.

“Everyone divided into different segments, helping each other and pushing forward,” Ahmad said. “By Wednesday afternoon, we had passed tech inspection and there we were, in awe of what we had just accomplished.

“We had achieved what we didn’t even think was possible for us in our first year, and what other teams were still trying to do,” he added. “After that, our spirits could not be dampened. We pushed through the noise, tilt and brake tests, and got in line for the endurance track for the next day.”

“At that point, it didn’t matter if we were first or last,” he said, adding, “In our eyes, we had done the impossible.”

Overall, working 16 hours a day was stressful to say the least but as long as someone’s spirit was alive, others rallied behind him.

“Even when it gets as tough as it did, and giving up seems so easy, pushing through and celebrating after the achievement is well worth it,” Ahmad said. “None of this could have been possible without the help, motivation, and guidance of our instructors, Professors Nadovich, Nestor, and Helm, as well as other staff.”

Nadovich said it was an incredibly rich learning experience, beyond what could be learned in a classroom.

“We didn’t have the sleekest car,” he said. “But for our first year at this competition, I can’t imagine a better outcome.”