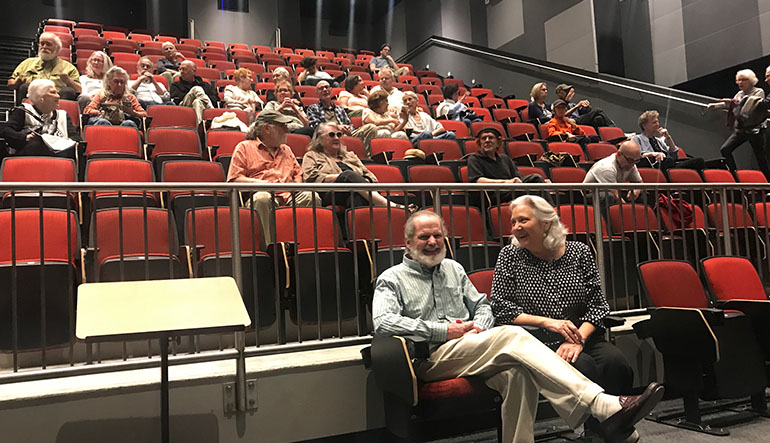 The Village on College Hill and Lafayette’s Film and Media Studies program are co-sponsoring a summer film series Tuesday evenings at the Landis Cinema at Buck Hall.

When screenwriter Nunnally Johnson wrote the final lines of his 1940 script based on John Steinbeck’s classic novel, “the people” meant to audiences at the time the crowds of disenfranchised farmers and working families who’d been upended and made transient by the Great Depression and the dust bowl in Oklahoma.

But on an unseasonably chilly night in early June, an audience of about 70 Easton-area residents at Buck Hall for an installment of a film series sponsored by the Village on College Hill and Lafayette’s Film and Media Studies program saw something more modern in Steinbeck’s towering dust bowl epic—the Mexican-U.S. border of 2018.

“These were very white actors,” one member of the audience said during a discussion that followed the Oscar-winning film, which features Henry Fonda. “But translate everything to Mexico. Then just imagine taking children away.”

Just as theatergoers at the third installment of the Easton Summer Cinema Series sought a modern theme in an old movie, the venue combines the current with the anachronistic. The Landis Cinema at Buck Hall is state of the art with a giant screen and stereo sound, but some elements of the program seem to draw from the days when celluloid chattered through old projectors.

For one thing, every Tuesday night, before the film rolls, someone stands in front of the screen and introduces it. And then afterward, the audience is invited to stay for the Easton Summer Cinema’s unique twist, one that feels equally archaic in the digital age—actual conversation. Before and after The Grapes of Wrath, the conversation leader was Andy Smith, associate professor and chair, Film and Media Studies.

After the film, discussion ranges from finer points (Did the bedroll that Fonda carried see its parallel nearly 30 years later in Peter Fonda’s Easy Rider?) to its connections with pressing issues in Easton and the broader world today (“We have these natural disasters,” says one audience member. “You’ll see the government help, but there’s a limit to what they can do.”).

While sometimes the talk touches on the political, it never swerves into invective or antagonism.

That’s by design. “In the era of Trump and the era of rude discourse, people are really losing connections with each other,” says Carol Inman, who along with Peter Coyne, hosts the weekly series. “I believe that in these times, art and conversation will pull us through.”

Inman got the idea from the Lafayette “Faculty Favorites” film series, which screened faculty- and staff-selected movies at the same venue throughout the 2017-2018 academic year.

Inman is a member of the Village on College Hill, a grass-roots local organization that helps aging residents on College Hill participate in social events and get much-needed help without being displaced. She learned about a funding opportunity through the Lehigh Valley Engaged Humanities Consortium (LVEHC) Mellon Grant to host public events focusing on contemporary local issues.

She applied for the grant, received funding from the LVEHC, and later obtained additional funding from Lafayette. She partnered with Peter Coyne, a friend and local movie buff. Funds pay for custodians, a student helper, a modest amount of promotion, and licensing fees to show the films.

“We also had great help from people who are doing it for free,” Coyne says. For example, two regular attendees work for WDIY, and they’ve been supportive on air. The Irregular, an Easton newspaper, reprinted the series schedule.

Theatergoers packed Buck Hall when the series opened with Whale Rider May 22, and the films have continued to draw locals. Not all of them are as old as The Grapes of Wrath—both Whale Rider and the second installment, Trouble the Water, were released in the 21st century. Each film must fit into a specific community discussion. The Grapes of Wrath, for example, fits into the themes of hardships and migrating communities.

The Mellon themes around which the film series is based are “the diversity of communities,” “the changing nature of work,” “the evolving landscape,” “environment and sense of place,” “the process of story making.”

“A lot of them overlap,” Inman says.

The old Marquis Theater on South Third Street used to feed hungry movie fans, but it closed in 2007. So did the beloved Cinema Paradiso, a fine arts house nearby. For locals who like to get around town without a car—like Coyne, who lives in the city’s West Ward—movies at Buck Hall are the perfect thing.

Just before the 7 p.m. showtime, the hall began to fill. Coyne brought a Woody Guthrie CD, which he played on a portable stereo as people came in. Inman and Coyne circulated, shaking hands with the regulars. Smith handed out a couple of photocopied pages of Steinbeck’s novel.

Sherry Morse came down from College Hill with her father, Mark Schuman. They took a couple of seats near the back. “This is a great program,” she says. “Nobody shows On the Beach [the 1959 film about nuclear war starring Gregory Peck; it’s the June 19 show]. That’s one of my favorite movies.”

Mary Liz Colley, president of the Village on College Hill, also came out for the screening. She’d read the Steinbeck book years ago and was moved by Ford’s black-and-white imagery, how it holds up and can still evoke community discussion even today. “That’s what the film series is all about,” she says.

“We really want this place to be a commons,” he says. “A place where the college and the community meet.”

He offers to lead a discussion group about the novel if anyone is interested.

“I’m grateful to all of you who show up,” he says. “You do this sort of illogical move. You show up for a film that is how old? It’s 80 years old almost. That’s crazy. And it’s wonderful.”