Women were once invisible and excluded from economic study. Today, their significance is undeniable Twitter

Perhaps the most dramatic societal shift over the past 100 years has been the evolution of women and the blurring of traditional gender roles—in homes, in schools, and in the workplace.

This transformation has had tremendous and far-reaching impact—one that not only affects women, but also their partners, their children, and the world economy as a whole.

This area of study has long fascinated Susan Averett, Charles A. Dana Professor of Economics, who has made it a focal point of her research and teaching within both the economics department and women’s and gender studies program at the College.

And so when Oxford University Press decided to produce an in-depth handbook devoted to examining women’s impact on the economy, editors at the prestigious publisher approached Averett. 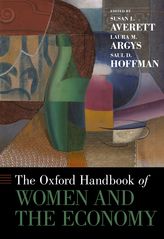 Their completed work—The Oxford Handbook of Women and the Economy (May 2018) —is the first comprehensive handbook focusing on the economic lives of women over the past century.

Averett and her collaborators began the endeavor three years ago, working together to create a proposal, mapping out a broad yet in-depth analysis on an array of subjects with an emphasis on marriage and fertility, the labor market, and policy issues. They recruited top scholars and up-and-coming researchers from around the world to contribute their findings and perspectives.

“We were very hands-on editors,” Averett says. “It was a labor-intensive process, gathering the researchers, giving them feedback on their essays, and contributing our own writing to the book. We cover some really fascinating topics, such as race in the labor market, the history of the gender-pay gap, and women and homelessness. I am very pleased with how it all came together.”

Some of the essays take an interdisciplinary angle, including research about gender from biology and other disciplines. This is reflective of Averett’s own interdisciplinary scholarship. She has published research linking biology and economics, such as the economic causes and consequences of obesity and the risky behavior of teens.

With 32 chapters each covering a separate topic area, The Oxford Handbook of Women and the Economy provides a thorough analysis of women’s role in the economy. However, Averett and her co-editors note that this is just an initial step forward.

“While this book provides the first comprehensive examination of women’s economic lives in both developed and developing countries, we are cognizant, and our chapter authors make abundantly clear, that there is still a great deal that we do not yet know,” they write. “It is fair to say that we are still in the early stages of having a full understanding of women’s economic lives, and the remaining challenges are substantial.”