If Jessica Ackendorf ’19 ends up finding a treatment for Parkinson’s disease, the movie Love and Other Drugs deserves a sliver of credit. 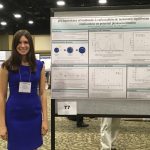 Ackendorf, a biochemistry major from New York state, was watching the 2010 flick, which follows a 26-year-old woman diagnosed with early-onset Parkinson’s disease, and was struck by the fact that few medications exist to help the condition. “I had difficulty comprehending it,” says Ackendorf, recalling a particularly moving scene where the woman, Maggie, struggles to lift a coffee mug because her hands are shaking so badly.

“I started to reflect on the vital importance of researching new drugs to help the 10 million people suffering from Parkinson’s worldwide,” says Ackendorf, who in March was awarded a Goldwater Scholarship, one of the most prestigious honors an undergraduate scientist can attain. The award provides up to $7,500 for college sophomores and juniors who intend to pursue research careers in the sciences, mathematics, or engineering. Lafayette is a top-producing institution of Goldwater Scholarships.

Chenyu Zhang ’19 also was awarded a Goldwater, and Andrea Killian ’19 earned an Honorable Mention. She worked closely with faculty and Julia Goldberg, director of the College’s scholarships and fellowships program.

Ackendorf plans to conduct neuroscience research within the pharmaceutical industry on a drug discovery team. Her passion for the field was confirmed in January when she did an externship at AstraZeneca pharmaceutical company, where she explored the role of R&D and regulatory affairs in the output of drug products. “I learned that I thrived off of the fast-paced nature of the pharmaceutical industry, since every chemical breakthrough is a life saved or a life improved,” she says.

This summer she’s interning at Takeda Pharmaceutical in Boston, where she’s working in vaccine development.

Her research at Lafayette is slightly outside the arena of what she considers her exploratory calling, but it holds significant potential for the planet. For the past two years, Ackendorf has been working with Melissa Galloway, assistant professor of chemistry, to study the effect of dark-colored aerosol, known as brown carbon, on the environment. Aerosols are tiny particles suspended in the air that come from natural and man-made sources. The dark-colored ones absorb light and warm the atmosphere, and each particle is composed of hundreds of different organic and inorganic compounds.

“Not a lot is known about the reaction that occurs in these tiny droplets, but we know it has a significant impact on our climate,” says Ackendorf, who presented a poster on the topic last summer at the American Chemical Society Mid-Atlantic regional meeting. “So our purpose was to study the effects of conditions such as pH and sunlight and how they affected the chemistry that was occurring.”

Science has long been an interest of Ackendorf, who would pester her parents for circuit-building kits and guidebooks for at-home science experiments when other children her age were asking for bikes and Barbie dream houses. It’s no surprise then that chemistry was her favorite class in high school, and she equates its study to learning a language.

“First you learn the periodic table of elements, equitable to the alphabet, then elements form a compound, which are words in the language of chemistry, and then those compounds react to make sentences, and sentences can have profound implications on our physical world,” says Ackendorf, who is not only fluent in chemistry but the art of debate. She joined Lafayette’s mock trial team three years ago without prior experience and now serves as captain to a team ranked 12th in the country.

It’s not hard to see cross-over between the two pursuits. Both require the ability to analyze a problem, ask focused questions, discover patterns of evidence, and identify flaws in a hypothesis or an opponent’s argument. Although she excels in both forms of communication, science is her muse as she hopes to one day decode the mystery of Parkinson’s and rewrite the stories of 10 million people.

Visit the Fellowships Office for more information on applying for scholarships and fellowships.