Descended from two samurai clans, Brad Au ’19, a history and government & law double major, comes from a long line of military families. His great-grandfather served as a general in the Philippine Army. His grandfather also enlisted. And now Au, a cadet in the ROTC Steel Battalion, is up and at ’em well before dawn.

As a member of the Ranger Challenge, in the fall Au trained six days a week for a competition pitting his team against 42 other battalions in the Northeast. Events included a navigation test, rifle marksmanship, medical evacuation, night orienteering, and an obstacle course. 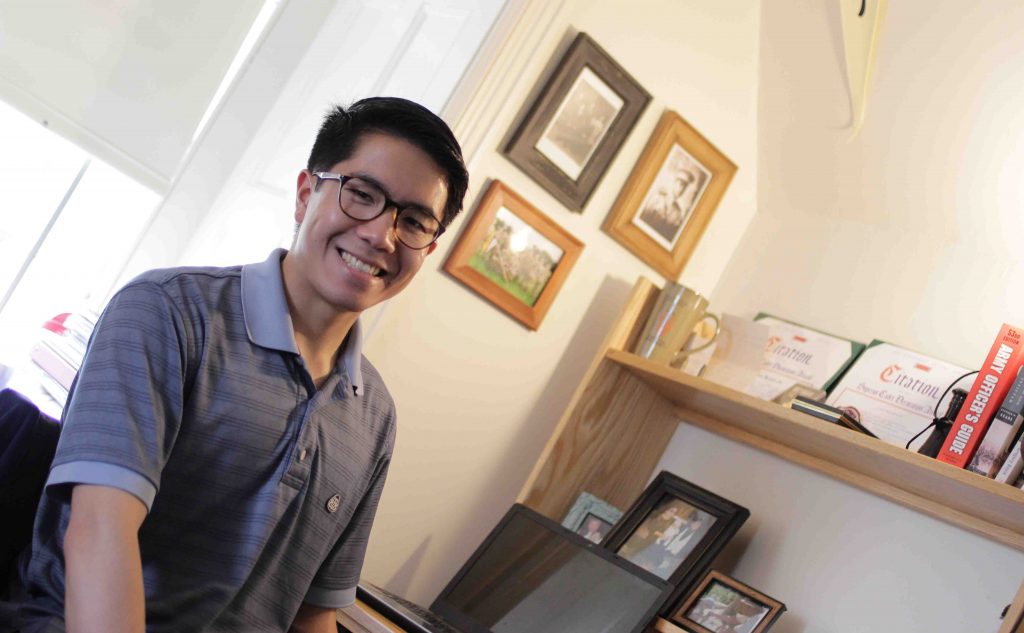 No trophy sits in his dorm room. Instead an Army flag is draped above his bed alongside a military propaganda poster from World War II. A sepia-toned print of his great-grandfather in his dress uniform hangs near his desk.

Down the hallway in the dorm room of Muhamad Bah ’18 hangs a 9-foot mirror. It’s not an object for which he has great affection so much as a relic that has resided in his room for years, passed down from student to student.

Reflection seems an apt metaphor for a film and media studies major who uses a camera to help the world better see itself. For Bah, art is the medium to translate the space between academia and the real world, between thinking and life.

Many of his films at the College have explored identity politics—what it is like to be black on campus. Before graduation, he is working on a final film that will use themes from westerns but feature black characters. 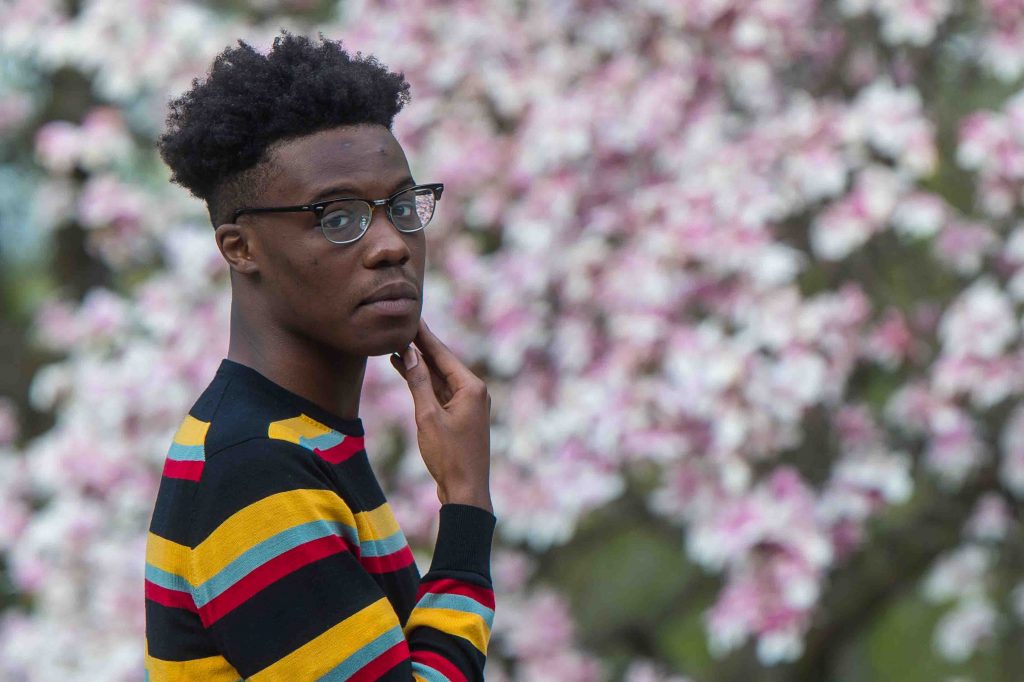 Au and Bah seem to be a study in contrasts—Army and artist, heritage and identity, competitor and creator. Yet they are united in perspective.

“I value my military service,” says Au. “The scholarship I earn is something that I alone work for. It opens me up and broadens my perspective.”

“I came here from a classical education at Brooklyn Latin High School and planned to be an engineer,” says Bah. “But the camera changed my perspective.”

Another source for perspective shaping: both reside in McKelvy House.

In 1960, the McKelvy family donated the College Hill mansion to Lafayette; it soon bore the name McKelvy House in honor of the family who had last lived in it. The McKelvy Scholars Program is designed for a small number of students who seek an intellectual community. 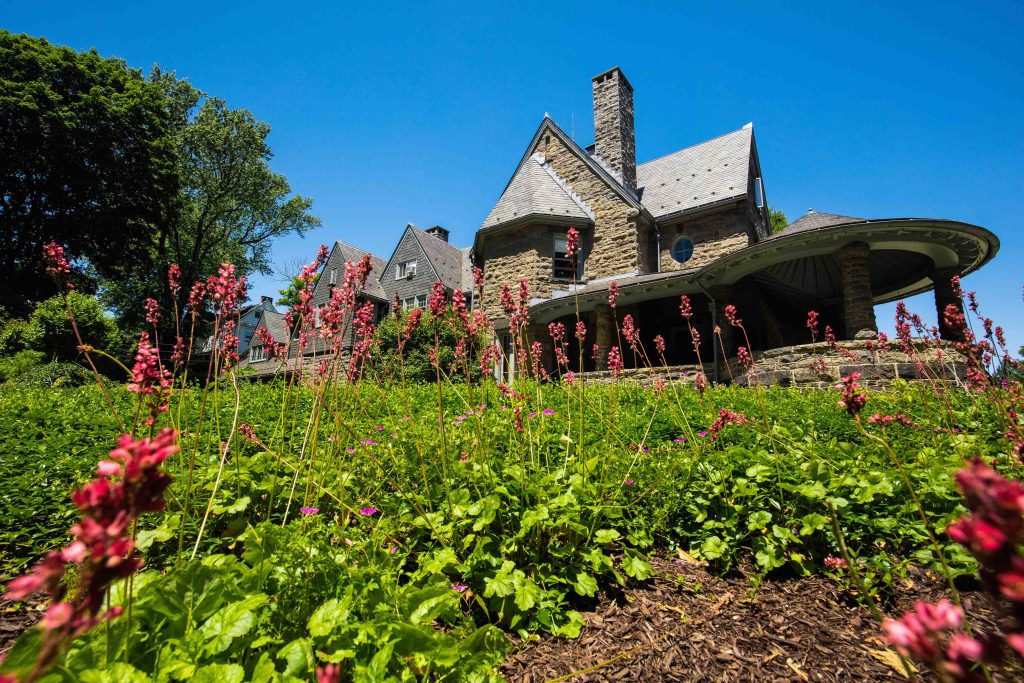 Au was accepted to join the house in his sophomore year; Bah as a junior. Applicants are nominated by a professor and then complete multiple interviews with residents and Rachel Goshgarian, faculty adviser and assistant professor of history. Applicants also complete an essay and share a product of which they are proud, like a paper they have written for a class, piece of artwork or poetry, or project with which they have been involved.

“It is the quintessential liberal arts experience,” Au says. “Residents have a degree of independence, living off campus and walking to and from school through a residential neighborhood. We have our own space and create a community of like-minded and close-knit friends.”

Bah adds, “It is an enclave on the edge of Easton, a magical escape from campus, with a wide range of students who demonstrate a certain intellectual maturity.”

The McKelvy community includes men and women from across the globe, including China, Qatar, and Nigeria, big cities like New York and Chicago, and many states, like Texas, California, Virginia, and Vermont. This merry band of scholars also has diversity in majors, like Spanish, mechanical engineering, English, and art history.

“It helps to know where people are coming from and how they view ideas,” Au says.

Ideas flow at McKelvy. One of the main requisites to live in the house is its residents’ commitment to fostering respectful and deep intellectual discussion.  So every Sunday night residents take turns bringing topics to the table. A recent discussion on the Olympics included a few articles to read prior to grappling with questions about benefits and drawbacks to hosting the games in addition to how, if at all, the games contribute to global understanding or simply reinforce nationalistic tendencies. 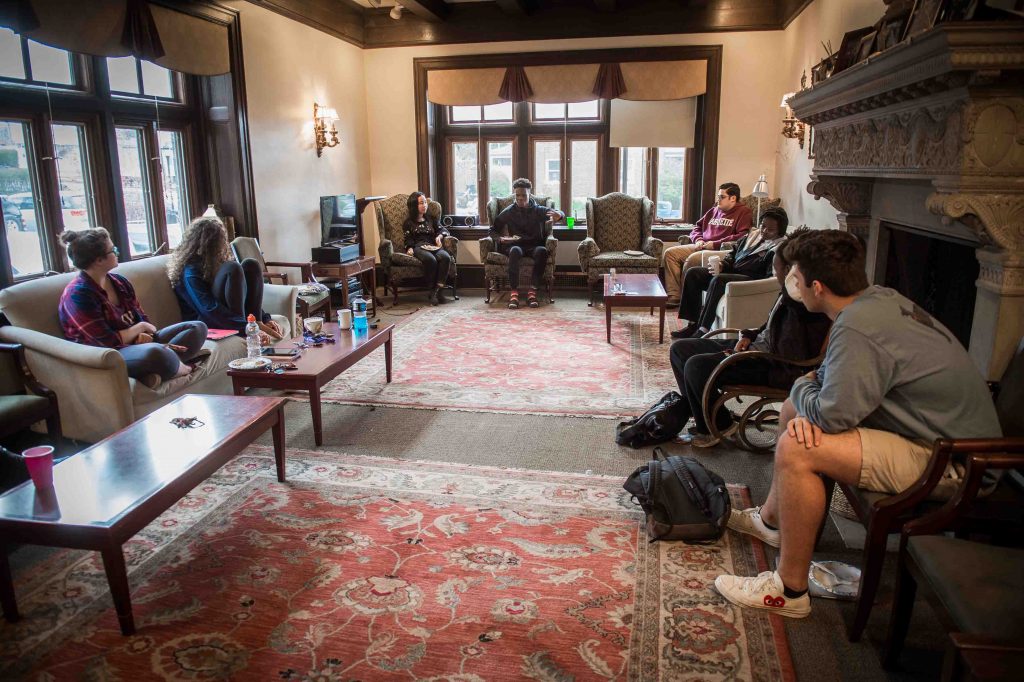 “The best discussions are on accessible topics that include articles to pre-read,” says Au. Sometimes a guest speaker is slated. Other times a debate. Guests are welcome.

That’s how Au first heard about it. As a first-year student he attended a discussion on sexuality and another on refugees.

“We can get messy at McKelvy and delve into root causes but still make it feel like a safe space,” says Bah.

“It’s important to have dialogue on campus, to hear different voices,” Au says. “But talking means attacking ideas, not the person, and remaining respectful. McKelvy has taught me to listen a lot more, to not always have to speak, to stand behind my ideas, and not just say it to say it.”

Au is not interested in fluff. On a pre-law track, he likes to talk ideas and be challenged.

That’s when he knew he had found his home. During one of his first visits, he was challenged. He told the group he was “fiscally conservative and socially liberal.” Another student slowly picked apart that phrase, leaving Au speechless.

“I had nothing to say,” he says. “I love politics and that phrase was a foundational element to who I was, a major tenant on which I stood. But I couldn’t reply with an informed and intelligent response. That experience shook me to the core where I had to examine who I was. Following that night, I knew I belonged here. I wanted more of that.”

So do others—42 people applied for the 10 slots that will open in the house next year. As the recruiting chair, Au sees that business is good.

“We are family. Busy with life on and off campus. We are close and care for each other, and work hard to find people who fit our unique approach to college life,” Au says.

Bah, who serves as president at McKelvy, is going to miss the house. “There is a lot of growing for members in those four walls—a real place for individuals whose voice can become a force…” he says. “We think differently and value perspectives.”