Hydraulic crusher tests how much pressure materials can withstand Twitter

Dave Mante pinned a $10 Wawa gift card on a whiteboard.

In the late afternoon shadow of the towering “Maroon Monster,” he asked students, faculty and curious observers to cast their guesses on how much load it would take to bend and fail a 750-pound steel-reinforced concrete beam.

Like a victim in a medieval torture chamber, the beam was positioned to accept all of the 55,000 pounds of pressure the monster could exert. That’s enough force to flatten a small car.

There was more at stake than winning the gift card. It was the first serious test of Mante’s Maroon Monster, made of 6,000 pounds of hardened steel with 13-feet-high columns to secure the hydraulic crusher. His design was custom fabricated off site and erected by students in his concrete lab at Acopian Engineering Center last fall.

Mante, assistant professor of civil and environmental engineering, is wild about concrete, one of the most sustainable and widely used construction materials on the planet. “Any time spent focusing on concrete is time well spent,” he said.

Students in his independent study course, which involves concrete at every opportunity, are introduced to structural load testing and data acquisition, something typically reserved for graduate study. 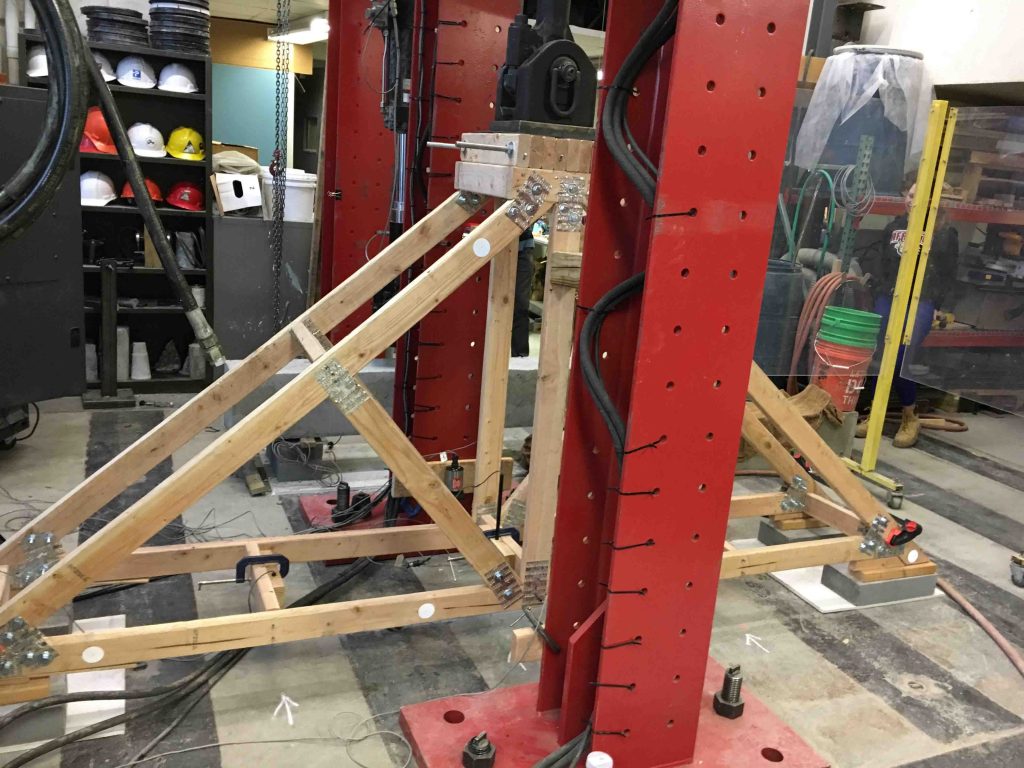 “My hope is that by introducing students to this complex field during their undergraduate careers, we can give them flexibility to explore a topic of independent interest, while also giving their graduate school applications a strong boost,” Mante said.

“It’s really cool to be part of a project that will still be here 50 years from now,” he said. “Often times you don’t get to do load testing on this scale until graduate school.”

Anticipation mounted as Mante went around the room and jotted down 10 guesses, which ranged from 23,000,000 pounds to 32,000 pounds, for when the concrete beam might fail. In a heap next to the beam were the busted remains of a truss made from sturdy Douglas fir two-by-fours tested earlier by Monica Meng ’18. It succumbed under 12,000 pounds of pressure in a test run of the monster in December, a stark reminder of the kind of power soon to be put on display. 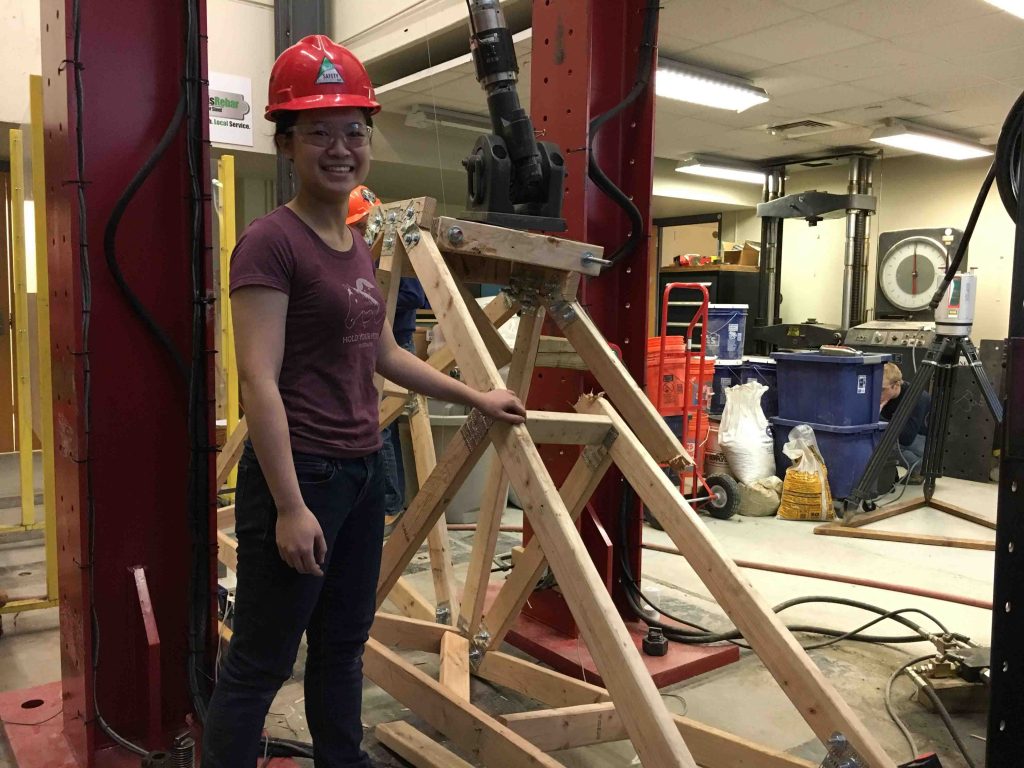 Monica Meng ’18 and the Maroon Monster

“This test has been a long time coming,” said Mante, who cued Nicholas to start applying pressure at 2,000 pounds. “Hit it, Dan.”

The movement of the hydraulic press, whose force is recorded and controlled by precision sensors on the Maroon Monster, was imperceptible.

“No cracking, so we keep going,” Mante said after inspecting the beam’s reaction to the first stage of the test. “Let’s go to 6,000 pounds.”

Still nothing, and the professor intoned, “8,000 pounds, here we come.”

The unfolding up-the-ante scene was something between a high-stakes auction and “The Price Is Right.”

Mante circled his index finger across the beam to inspect it for cracks. Still nothing. Leave it to Lafayette engineering students and faculty to mix and cure one stubbornly tough concrete beam.

At 18,000 pounds of pressure, tiny rivulets of cracking were visible to the naked eye, and at 20,000 pounds the faint sound of high-pitched cracking could be heard.

As Nicholas reported deflection, or sag, in the middle of the beam, Mante slipped on rubber knee pads to get a closer look. He saw deeper cracks, but the beam was nowhere close to failure quite yet. In fact, it showed exactly what’s supposed to happen to a well-behaved reinforced concrete beam—controlled cracking (about fingernail thickness) under anticipated service loads.

At 24,000 pounds, the first pool member was knocked out of contention for the Wawa gift card.

On up to 36,000 pounds—about the load from eight pickup trucks—Mante said the beam, if sentient, would be saying, “Please, no more load; I’m about tapped out of load-carrying capacity.”  Warning signs of impending distress were becoming apparent, including wider spidery cracks throughout and visible sagging of the beam. 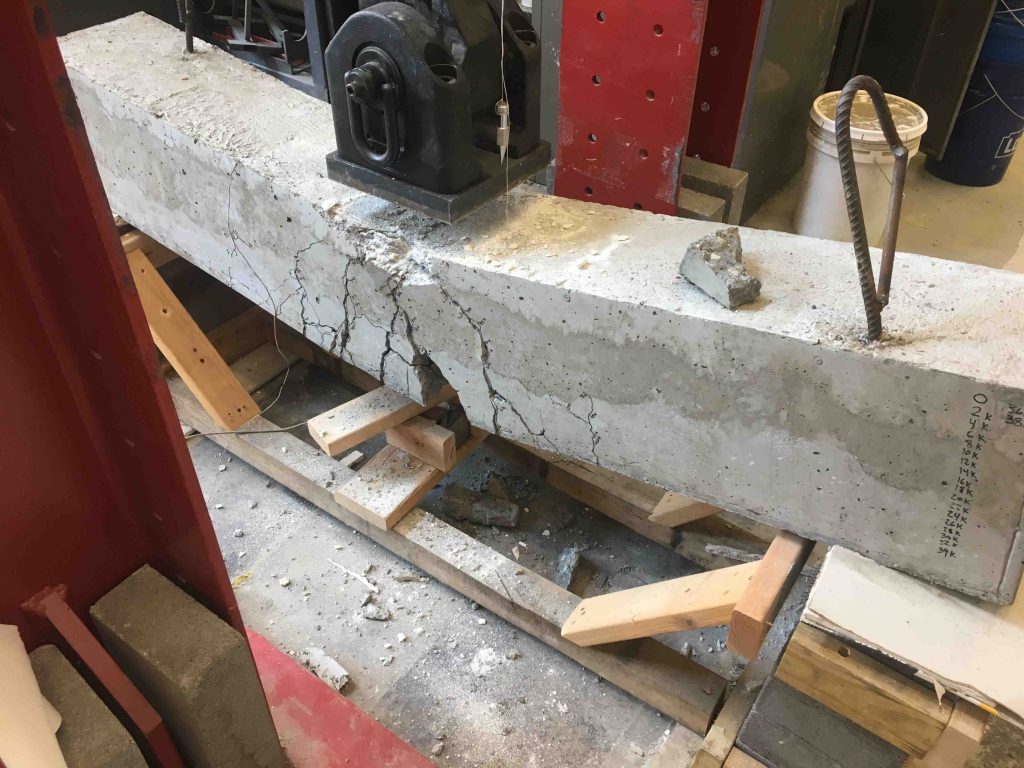 Finally, at 52,500 pounds and after about 90 minutes, defying the random and calculated guesses of lay people and academics, pieces of concrete started flaking off it like oxidized cake frosting. The beam had reached the greatest load it could support, the ultimate capacity.

“Thanks for coming today. We really appreciate the excitement about these tests,” Mante said.

As for the Wawa gift card winner—Mike McGuire, assistant professor of civil engineering.