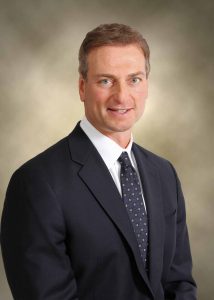 When it came time to give back to Lafayette College, Jeff Wasserman ’86 turned his thoughts to a lost friend and classmate and a memorial scholarship he received that helped him pursue a career in medicine.

Wasserman was the first recipient of a scholarship established to honor Kimberly Popple ’86, a pre-med student who died of cancer before graduating. Her classmates set up the scholarship as the senior gift.

Also a pre-med student, Wasserman, an advanced first-aid instructor, organized first-aid classes on campus for the student body. His classmates told Popple’s mother about that outreach to the campus community, and the family decided to award the scholarship to Wasserman.

Wasserman, forever grateful for opportunities made possible by the scholarship, recently donated $100,000, made on behalf of his class, to enhance the Kimberly Popple ’86 Memorial Fund, a lasting tribute to the memory of his friend.

“My friendship with Kim and the fact that I had received the honor of the scholarship myself were the main reasons for making the donation,” adds Wasserman, a chronic pain management physician in Dallas. “She was a good friend, and her mother wanted me to get the scholarship.

“Knowing Kim made it that much more special. It was humbling because I knew what a special person she was— she was a lovely person, inside and out, an intelligent, caring person who always had a great smile on her face,” he recalls. “Kim was in pre-med, too, and that’s why this fund was established to help students in that field.” 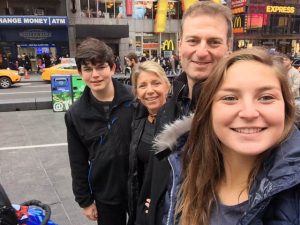 Jeff Wasserman ’86 with his family

Combining a medical degree with an MBA, Wasserman has been, over the years, a physician, an administrator, and a business entrepreneur.

After leaving Lafayette, Wasserman attended medical school at Penn State and did a residency at Harvard’s Massachusetts General Hospital in anesthesiology and chronic pain. He has consulted with physicians about starting their own surgery centers and toxicology laboratories. He also founded laboratories that help physicians control prescription medicine abuse by testing patient urine and saliva for the presence of prescription or illicit drugs.

Wasserman is now part of Vital Pain Care in Dallas, a practice dedicated to acute and chronic pain management.

Much of his success can be traced to his experiences at Lafayette, he says.

“Like most kids who go to college, I was immature,” Wasserman says. “The small-school environment was just fantastic for me.”

Faculty mentoring helped him gain confidence. He had important mentoring relationships with (since retired) Professors Shyamal Majumdar and Wayne Leibel, with whom he did research as he was pursuing his biology major. “When you get close to people and get that relationship, you get very at ease. You’re not overwhelmed by the environment,” Wasserman says.

“I love the biology department,” Wasserman says. “It really helped to grow my interest in health care.”

In turn, he wanted to help support Lafayette’s pre-med program through the fund that has benefited many students through the years.
“The Kimberly Popple ’86 Memorial Fund afforded me the opportunity to attend Lafayette College and benefit from a small liberal arts school experience, including small class sizes and virtually unhindered access to faculty,” says biochemistry graduate Stacey Wagner ’03, director, bioinformatics and genomics master’s program at University of Oregon. 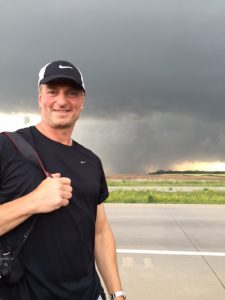 Storm chasing is a hobby of Jeff Wasserman ’86

She says the most impactful part of her experience at Lafayette was the opportunity to perform interdisciplinary scientific research alongside faculty and to communicate her findings by publishing in scientific journals and through presentations at conferences.

“These research experiences and mentorship ultimately led to my decision to attend graduate school and earn a Ph.D. at the University of Colorado Boulder campus,” Wagner says. “The faculty mentorship and leadership activities at Lafayette precipitated my own interest in teaching and mentoring scientists to set them up for successful careers.”

In addition to research, she was able to hone her teaching and mentoring skills through tutoring and serving as a General Chemistry teaching assistant.

“Few of my graduate school classmates had these experiences as undergraduates, she says.

Wasserman is heartened by how the scholarship has created these experiences.

“Like many small liberal arts colleges, Lafayette doesn’t have a formal pre-med program. It has more of a ‘program without walls,’ so to speak,” he says. “So whatever I could do to encourage that by having a scholarship for pre-med students, I thought, would be money well spent by the College.”