If you haven’t heard, Merriam Webster recently added 300 new words to the Scrabble dictionary, and one of them is “bizjet,” a small airplane used for business. The word not only delivers a whopping 18-point score, as the ‘z’ and ‘j’ are primo letters, but its insertion in the game’s canon is indicative of an industry that continues to grow as more companies choose to either purchase or charter their own aircrafts rather than rely on commercial flights for business travel. 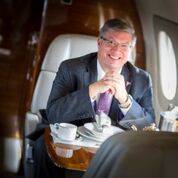 People are viewing aircraft as a productivity tool,” says Gil Wolin ’72, publisher of Business Aviation Advisor, a print and online trade publication whose readers are bizjet owners and influencers. “This isn’t about going on vacation. It’s about becoming more efficient and productive from a business perspective. Time is really the only nonrenewable resource.”

Business aviation has been around almost since the invention of the airplane, says Wolin, but the introduction of the turbo-prop aircraft in the late 1950s followed by the business jet in the early 1960s propelled the industry as people began realizing that time, not steel, was the most precious commodity.

Today, business aviation generates $219 billion in economic activity in the U.S. and supports 1.1 million jobs across the nation, says Wolin, citing statistics provided by No Plane, No Gain, an advocacy program of the National Business Aviation Association and General Aviation Manufacturers Association.

In addition, 80 percent of business flights fly directly into one of the more than 5,000 U.S airports available to those aircraft, many of which are located in small towns and communities. By comparison, commercial airline flights serve only 514 U.S airports. Business jet travel enables executives and high-net-worth individuals to avoid unnecessary connections and other delays, saving countless travel hours annually.

Wolin, by nature of his profession as publisher of a bizjet trade publication, is naturally a cheerleader for the industry. And it’s easy to see the benefits of flying on a business aircraft as opposed to standing in ticket lines, wading through security, and sitting in a cramped seat with zero leg room only to miss an important meeting due to a delayed flight.

While the industry slowed dramatically during the 2008 recession, with many owners selling their aircraft, the past three years have seen a strong recovery. According to JETNET, a leading provider of aircraft market data, less than 10 percent of the fleet is for sale for the first time in five years. And Argus International, another aviation data company, is showing business aircraft flight activity rising monthly by as much as 5 percent for the past three years among both jet owners and charter users.

“My first aviation job after graduation was in market research for Learjet,” says Wolin, “and these kind of data are critical for our readers—those looking to make the most of their investments in business jet travel, whether as owners or charterers.”

He’s not the only alum in the field. Lafayette has representation in various sectors, and three high flyers (we couldn’t resist) you’re about to meet all have had a significant impact on the industry. 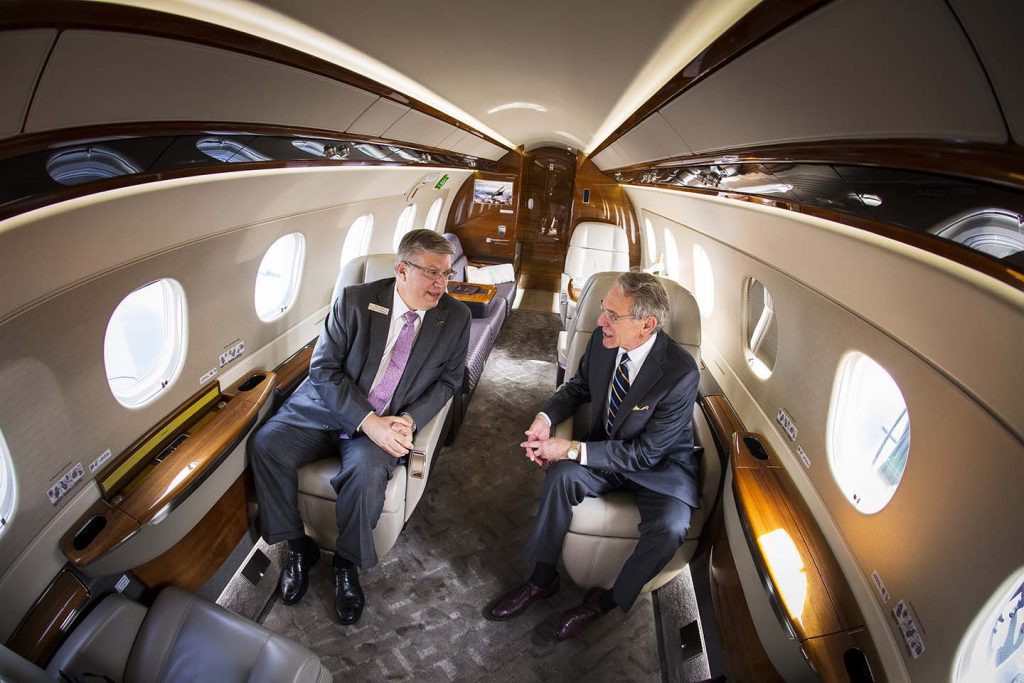 Eric Kantor ’87 spent nearly 30 years as general counsel for GE Aviation, a global aircraft engine manufacturer. While earning a degree from George Washington Law School in 1990, he gained experience doing contract work for the military during a clerkship at the Pentagon. Upon graduating, he practiced with a Washington, D.C., law firm representing defense contractor claims against the U.S. government. He joined GE Aviation in 1997 as general counsel of military operations and recently retired as general counsel of GE Additives, a new GE business that essentially 3D prints metals to manufacture aircraft engine components.

The additive manufacturing technology with its use of heat-resistant metals is a game changer in the entire aviation industry.

“If an aircraft component requires a circular tube, traditional manufacturing would require you to make two half circles and bolt them together to preserve the strength of the metal,” he says. “What additive manufacturing allows you to do is make the whole circle in one piece.”

As a result, engine parts are stronger, lighter, and cost less to manufacture. They also require fewer parts. Using additive manufacturing, GE reduced the number of parts in its newest bizjet engine from 840 to 11.

“Airlines want to put people on planes, not big heavy engines,” he says. “For every 200 pounds you save you can stick another person on the plane.”

Kantor is proud to have been a “pioneer lawyer” in aviation and attributes much of his success to his time at Lafayette. “Lafayette taught me to not accept status quo, think big, and believe that anything is possible,” he says.

Now vice president of executive jet management, Dennis Germaske ’93 started working for a commercial aircraft leasing company owned by financier and philanthropist George Soros the day after he graduated with a major in anthropology and sociology.

At the time, conventional wisdom held that a commercial airliner had no more than a 20-year shelf life. So Germaske’s job was to acquire planes that were about to be retired from American, Delta, and other commercial operators and sell them to developing countries overseas as a way to extend their lifespan.

The timing couldn’t have been better. The Soviet Union was collapsing, apartheid ending, and tectonic shifts were taking place in geopolitics. Countries such as Czechoslovakia, Zimbabwe, Bolivia, and Mexico were looking to build infrastructure, and western airlines were out of favor with locals. At the same time, Russia and China began buying fleets of airplanes in the run-up to the recession.

“There was such massive wealth created,” he says. “The demand for corporate airplanes was global, but the expertise was still in the U.S.”

Then came 9/11, which eventually triggered a growth in the private aviation sector, leading Germaske to take a job with TAG Aviation, a Swiss aircraft management company offering “soup to nuts” management and oversight services for corporate, high-net-worth families, and individual owners of private airplanes. That’s where he met Wolin, who eventually became his boss. He joined EJM, a business aircraft management and charter company and part of the fractional company NetJets’ family of operations, in 2015.

One of the biggest disruptors of the industry in the past 25 years has been the emergence of the internet, he says, which allows sellers of charter aircraft to connect with buyers.

“In the pre-internet days if there was an airplane sitting in Allentown and the owner wanted the management company to charter it out, they were basically restricted to selling to locals,” he says. “What the internet did was allow for the broader dissemination of information. It basically democratized aviation.”

Most recently, charter companies are developing mechanisms to sell a seat on an airplane rather than chartering the entire aircraft. Commercial and business aviation have met, Germaske says, creating a third category, which is commuter-type operations. JetSuite is now running shuttles up and down the West Coast, allowing professionals to travel on a private jet for a few hundred dollars.

Steve Friedrich ’88 caught the bug for aviation when he was about 4 and his parents woke him up a little before 11 p.m. on July 16, 1969, to watch Neil Armstrong take humanity’s first step on the moon.

“For whatever reason, it had a lasting impact on me,” he says. “I wanted to be an astronaut, but my poor eyesight wasn’t going to allow me to do that.”

He’s doing the next best thing, at least in his book. As chief commercial officer of Embraer Executive Jets, a Brazilian aerospace conglomerate, and in his  other aviation-related jobs, he’s traveled the world several times. Just not from space.

In his present role, he oversees sales, client and industry relations, and business development for a company that prides itself on manufacturing internet-enabled “flying offices” to facilitate increased production among executives of Fortune 500 companies and managers of middle-market firms.

“It’s not about fat cats on a plane,” he says. “It’s about business people who are driving the engine of the economy in the U.S. and globally.”

An economics major, Friedrich got into the business from the finance side. As vice president of Summit Bank of New Jersey, he started a business unit that purchased business aircraft and lease them to commercial providers such as Delta, United, and Continental. The leasing initiative turned out to be extremely successful and helped launch his career first at Rolls Royce, where he was responsible for sales and marketing for business aviation, and then at Embraer.

Friedrich is optimistic about the market, saying he sees it expanding and not only because business jets reduce travel time between point A and B. The real value, he says, is that the mode of transportation facilitates face-to-face connections.

“Internet and big data are making us more efficient, but you can never underestimate the power of the personal relationship,” says Friedrich, crediting Lafayette for helping develop and hone his communication and social skills. “The global industry is based on interaction.”