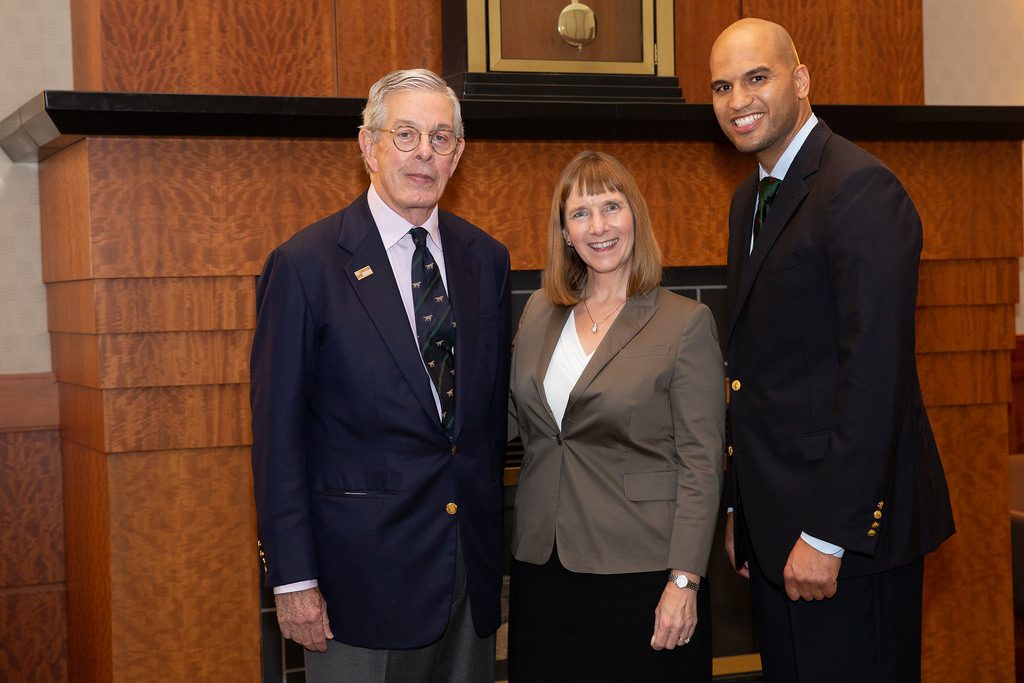 Dyer returned to his alma mater over Homecoming weekend to encourage involvement from the campus community and was honored during a reception. President Alison Byerly reiterated the importance of this gift and its connection to furthering entrepreneurial learning at the College.

“Lafayette has a long history of providing students with the capacity to develop a broad range of creative thinking skills,” she explained. “The very nature of the Lafayette experience, which integrates liberal arts and engineering, offers a truly innovative approach to higher education and inspires innovative thinking by the members of our community—faculty, staff, and students. The Dyer Center is perfectly poised to further this effort and supports our ability to adapt our entrepreneurial and innovative learning experiences as our world evolves and advances.”

Since its launch in 2013, the former IDEAL Center has provided students with the opportunity to connect a liberal arts perspective to real-world issues, acquire practical business skills, and develop global perspectives. Students like Wassim Gharbi ’19 have benefited immensely from entrepreneurial learning at Lafayette. Gharbi, who is majoring in computer science with a minor in mathematics, has been pushed to think beyond his areas of study due to Dyer Center programming.

“Since my area of interest is software engineering, a lot of my courses have been focused on the implementation side,” explains Gharbi. “The Dyer Center’s programs definitely help me think beyond the technicalities of software engineering and more about the problems that a piece of software solves, who its users/clients are, what revenue models can support it, what to do to take an idea from prototype to business, etc.” 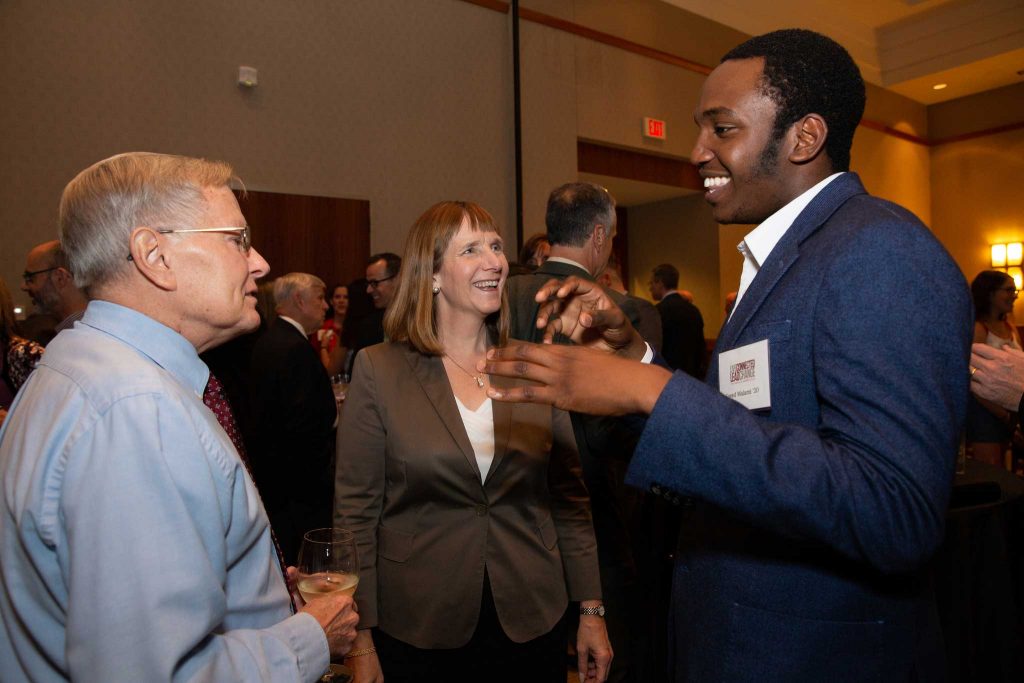 Dyer is founder of Paragon Associates, a hedge fund that he formed after spending six years on Wall Street as a securities analyst. As an entrepreneur himself, he spent more than a year researching other centers for entrepreneurship including speaking with directors, faculty, and administrators at top schools before deciding to support the Dyer Center and its initiatives. He understands that growing the center involves establishing relationships with area business development centers to facilitate student exposure to start-ups, formulating curricular and co-curricular courses, hosting entrepreneurs-in-residence, and providing avenues for student internships among other activities. Dyer also believes that a director who recognizes the challenges that lie ahead in creating a top-notch educational experience for students interested in innovation and entrepreneurship is key.

“Yusuf Dahl is unconventional in his thinking,” remarks Dyer about the first director of the center. “I am encouraged that he is going to move things forward in interesting ways.”

Dahl is no stranger to serving as a change agent. He came to Lafayette to build a best-in-class entrepreneurship program and believes the College has all of the right ingredients to do it.

In a previous position at Princeton, Dahl taught social entrepreneurship and formed community partnerships to offer students learning opportunities outside the classroom, among many accomplishments. And just as start-ups require seed money to launch their product or service, a leading entrepreneurial program requires an investment in resources, which Dyer has made possible.

“It is important for Lafayette to adapt to the marketplace to ensure that students remain globally competitive,” says Dahl. “Entrepreneurship aids in the formation of a community of problem-solvers. Brad’s support is helping us to get started. We are at a critical moment in this venture, and with time, talent, and commitment from our amazing alumni community, I am confident we will accomplish what we set out to do.”

Dyer is a firm believer in the integration of innovation and entrepreneurship in the liberal arts context. “An entrepreneurial mindset, when combined with the strong academic rigor of Lafayette, will enable our students to positively impact the world and live a life of meaning,” he says. “It’s not a panacea to the problems plaguing society, but the more we encourage innovation and entrepreneurship in both the for-profit and not-for-profit space, the more we increase our likelihood of finding solutions that work.” 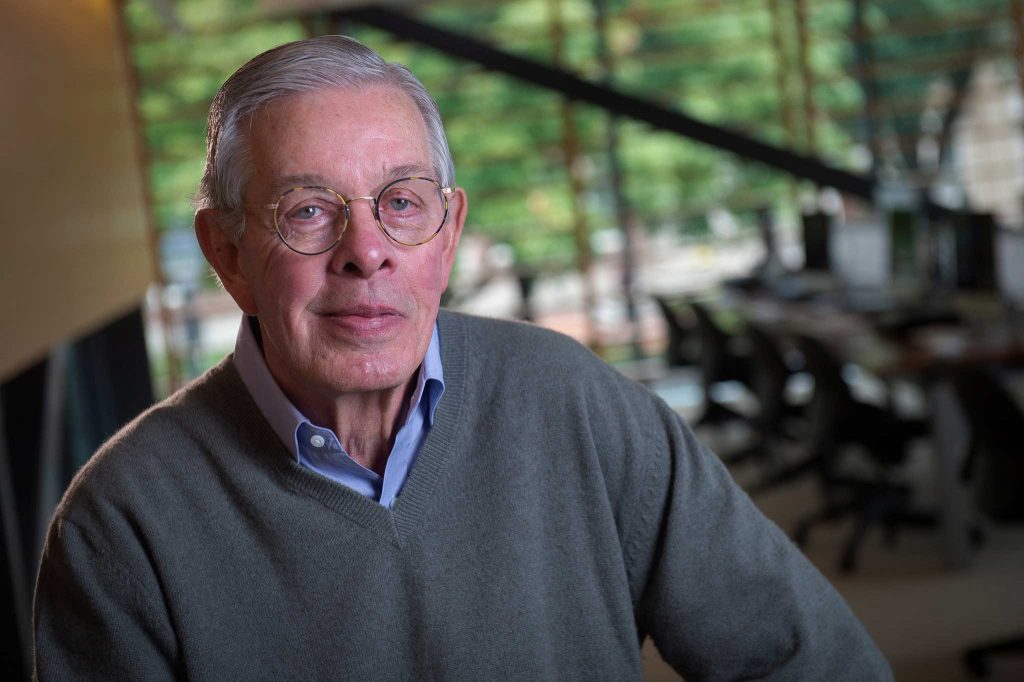 During his time at Lafayette as a liberal arts student, Dyer developed a keen interest in the world of finance, triggered by the influence of economics professor Harold Tarbell, as well as summer internships with the Wall Street firm Loeb, Rhoades & Co. He attended Harvard Business School immediately following Lafayette. After graduating from Harvard in 1966 and subsequent to fulfilling the active duty portion of his Air National Guard commitment, he assumed a position with Loeb, Rhoades & Co. Dyer ventured out on his own and formed the hedge fund Paragon Associates after spending six years on Wall Street as a securities analyst.

“My timing was less than optimal as I ran smack into the bear market of 1973-74,” says Dyer. “In spite of suffering major losses to the capital of my partners, perseverance won over quitting, and I continue to operate the fund 46 years later. Serial entrepreneurs and people who play team sports have at least one desirable trait in common: They don’t quit in the face of adversity.”

Dyer feels that Lafayette’s strength in the liberal arts had a positive influence on his career. So much so that he previously endowed four Marquis Scholarships, one in honor of Tarbell and three in honor of tenured liberal arts professors representing his coursework in French, history, and geology. As a first-year student, he was placed in second-year French, which he promptly failed. One of these scholarships is named after Samuel Pascal, the French professor who “woke me up,” admits Dyer.

Dyer’s motivation for endowing the Center for Innovation and Entrepreneurship at Lafayette hinged on several dimensions. Of prime importance was the belief that ultimately, a college education should represent a pathway to a meaningful career. 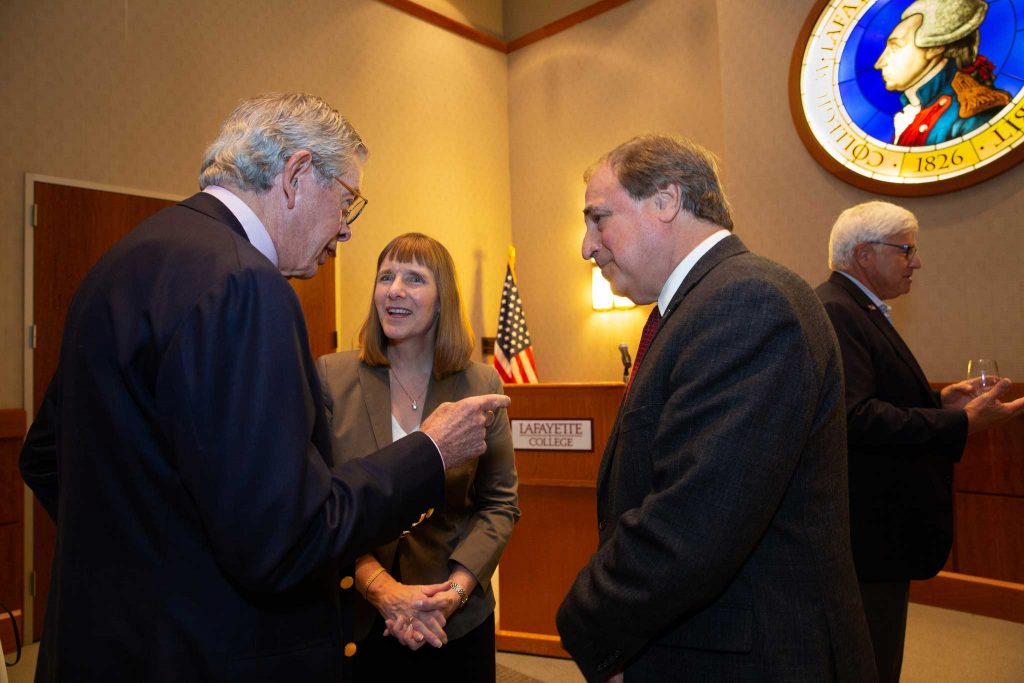 Dyer also points to the fact that artificial intelligence (AI) is significantly changing the employment landscape. “Creative thinking, empathetic thinking, intelligent risk-taking are skill sets or attributes that cannot and will not be replicated or replaced by AI, and thus represent differentiators that are highly valued in the workplace,” he explains. “We live in a world where rapid technological advancements feed the pace of innovation. Think Warby Parker and Dollar Shave Club; neither of these represents problem-solving breakthroughs. The innovation was in determining that the internet could level the marketing/distribution costs playing field in areas where there are pricing umbrellas attributable to historical practices. These are exciting times in the world of innovation; expect more disruptions of historical business models.”

As for the link between innovation and entrepreneurship, Dyer cites the example of privately developed, cost-efficient space delivery systems by serial innovators and entrepreneurs Jeff Bezos (Blue Origin), Elon Musk (SpaceX), and Richard Branson (Virgin Galactic). He also points to Global Good Fund, started by innovator and entrepreneur Bill Gates, whose goal is to accelerate the leadership and impact of social entrepreneurs around the world.

Dyer has been a major funder to the Class of 1964 Meehan, Victoria Scholarship, which he caused to be named after two of his classmates and Phi Delta fraternity brothers who were killed in Vietnam. He is a member of Société d’Honneur, which recognizes his lifetime commitment to Lafayette.

In addition to his continued involvement with the Dyer Center, he is chairman of the Board of Directors of the Edmund Niles Huyck Preserve and Biological Field Station in Rensselaerville, N.Y., and is a trustee of The Winston Churchill Foundation of the USA. Originally from Madison, N.J, Dyer is a serious collector of 19th- and 20th-century American still-life paintings, and in his spare time oversees a quail hunting camp in South Texas.