When it comes to midterm elections, there are two historical certainties—voters don’t turn out in impressive numbers and the president’s party loses seats in Congress. 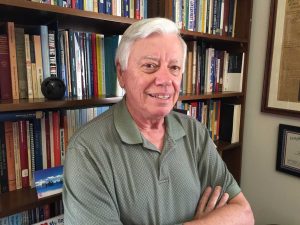 With all of the sniping between Democrats and Republicans and fervent calls from both sides to bring out the vote, it might seem these trends will shift this time as Nov. 6 looms. But despite what may feel like a surge in voter enthusiasm, John Kincaid, Robert B. and Helen S. Meyner Professor of Government and Public Service, still predicts traditional lackluster turnout at the polls and a takeover of the U.S. House of Representatives and some state legislatures by Democrats.

Voter turnout might be slightly higher this time, but Kincaid expects the usual 35-40 percent of those eligible to vote to visit their polling places. Presidential elections usually bring out around 50-60 percent.

Kincaid will serve as a commentator, along with three other Lehigh Valley political science professors, as part of PBS39’s live election night coverage. The panel will discuss key issues in local and state elections from 8-11 p.m. Nov. 6. Before the live coverage begins, the station will air a pre-recorded segment featuring election views from students in Lafayette’s Policy in Action Club, which is led by Mark Crain, Simon Professor of Political Economy and chair of policy studies.

Here’s a preview of Kincaid’s analysis of the upcoming midterms.

Traditional voter apathy will characterize midterm turnout, despite a politically charged atmosphere. The indifference is partly due to the fact that most people don’t know the candidates, Kincaid notes.

“If you walk down the street and ask who are the candidates for Congress in this district (Pennsylvania’s 7th Congressional District) most people would have no idea,” he says. “Most people aren’t identifying themselves that strongly as a Democrat or a Republican. They may be upset about Trump or Kavanagh to some extent, but they don’t recognize the candidates. A few more may know Gov. Wolf’s name. That’s a barrier to turnout.”

Kincaid expects Republicans to maintain control of the U.S. Senate, while Democrats should pick up the 23 seats needed to become the House majority. Democrats will benefit from redistricting in Pennsylvania and in a number of congressional seats in suburban areas across the country that supported Trump in 2016.

“Many suburbanites who voted for Trump are not happy,” he says. “They thought that Trump, even though he was wild during the campaign, would calm down and become more presidential. That hasn’t happened, and it has upset upper-income voters, especially women.”

In the race for the House seat in the Democratic-leaning 7th Congressional District, which represents most of the greater Lehigh Valley, Susan Wild will defeat Republican Marty Nothstein and Libertarian Tim Silfies. U.S. Sen. Bob Casey (D) will prevail as well, Kincaid says.

Even state governments lose seats in the party of the president in off-year elections. Republicans control most of the state legislatures, holding at 38, and 26 states are completely Republican in terms of the governor and legislature. “That will change after the election. You’ll see the Democrats capture some chambers of some legislatures,” Kincaid says.

If Democrats take back the House, legislation will stall and the party will “undertake investigations through the roof.” That won’t stop a Republican-controlled Senate from supporting conservative judges for federal courts and the Supreme Court, he says.

“If you thought Kavanagh was big, if Trump gets to nominate another justice after Ruth Bader Ginsburg retires, what happened to Kavanagh will look like kindergarten play,” Kincaid says. “If the next appointment comes from Trump, that’s where the battle will be.”

Only one in three Americans ages 18-29 are certain they’re going to vote on Nov. 6, according to a new survey by Public Religion Research Institute and The Atlantic. That’s in sharp contrast to seniors 65 and over, 81 percent of whom are expected to cast votes, the survey shows. Kincaid notes that older voters want to defend Social Security and Medicare and have the time, interest, and maturity to take the time to closely examine issues and candidates.

Political organizations always try to influence the youth vote, but it fails every time, he says. “Given the energy in this election, there might be a slight upsurge, but this age group will have the lowest turnout of anybody.”

Kincaid regularly asks students at Lafayette if they expect Social Security to be around when they turn 67. “One or two hands go up,” he says. “I ask them why they’re not out voting and explain how much it’s going to cost them to support me for Social Security. They cannot imagine at age 18 or 19 what it’s like to be 67.”

“We’re looking at a polarization now that is very similar to what happened in the 1850s over the slavery issue,” Kincaid says.

Abortion seems to be the leading social issue now, “the lightning rod of polarization,” even though polls show that since 1973, 63 percent of Americans support the Roe v. Wade decision, he says.

“Now that number gets smaller depending on how you pose the question—should a woman be allowed to have an abortion on demand or for any reason? Here you get less than 50 percent saying yes,” Kincaid adds. “Abortion is very similar to the slavery issue in the sense that there’s no compromise, either you have slavery or you don’t or you have an abortion or you don’t.”

Similar to the highly charged atmosphere in the 1850s, voters now are also driven by a fear of a centralized political system.

“When you look at Trump voters, they feel that their democratic decision-making powers have been taken away by the elites,” says Kincaid, adding that for them, the seven unelected justices on the Supreme Court overturned laws in 50 states and completely took abortion out of the democratic process.

“You can’t compromise on same-sex marriage and abortion,” Kincaid says. “So that’s the challenge. We couldn’t solve the slavery issue politically, and Americans died in a civil war as a result. You can see some really vicious and nasty stuff right now. It gets worrisome.”

Categorized in: Featured News, Government and Law, News and Features