Alex Brown encountered deer almost every night driving along rural roads of central Pennsylvania during his graduate and postdoctorate work with autonomous vehicles at Penn State.

A driver can take action to swerve away from the path of a spooked deer leaping into a roadway. But in the coming era of driverless vehicles, the challenge of avoiding deer collisions takes on entirely new dimensions of technology and research.

“When you’re designing a robot that’s going to avoid certain things, it has to have some inkling of where it’s going,” says Brown, assistant professor of mechanical engineering. “That’s pretty hard to do when you’re talking about a deer.” 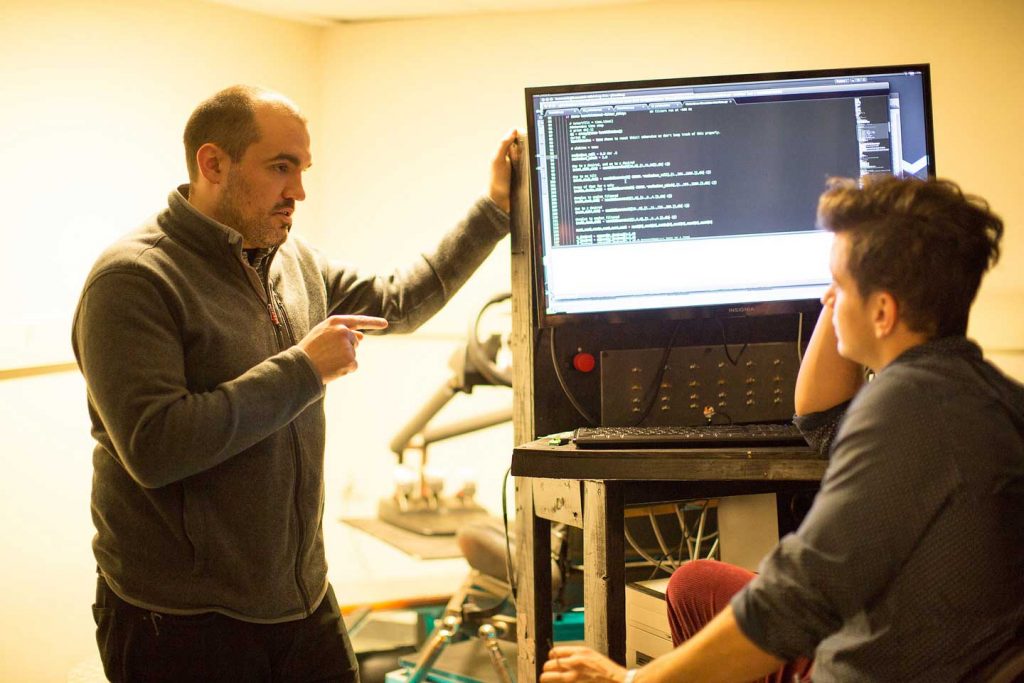 During his first year at Lafayette, Brown worked with a colleague in biology, and together they hatched the idea to develop a model of a road-rogue deer and create algorithms and simulations that would steer a driverless car out of its treacherous path.

Brown’s students stepped in and built a simulator from scratch that will aid the autonomous vehicle industry in refining one part of its safety features. Testing involves a human subject wearing a headset sitting in a chair, outfitted with sensors, that tilts and moves side to side in response to how a driver reacts when a simulated deer jumps into the road.

“Animals behave a certain way when responding to some stimuli or threat,” says Sam Cutrone ’18, who graduated as a double major in mechanical engineering and computer science. He was involved in the project since his sophomore year and wrote the software for the simulator and based his thesis on the research. Cutrone’s thesis was co-advised by Brown and Chun Wai Liew, associate professor of computer science.

Joaquin Font ’19, economics and mechanical engineering, worked on the quality of the simulation and improving accuracy of the chair. 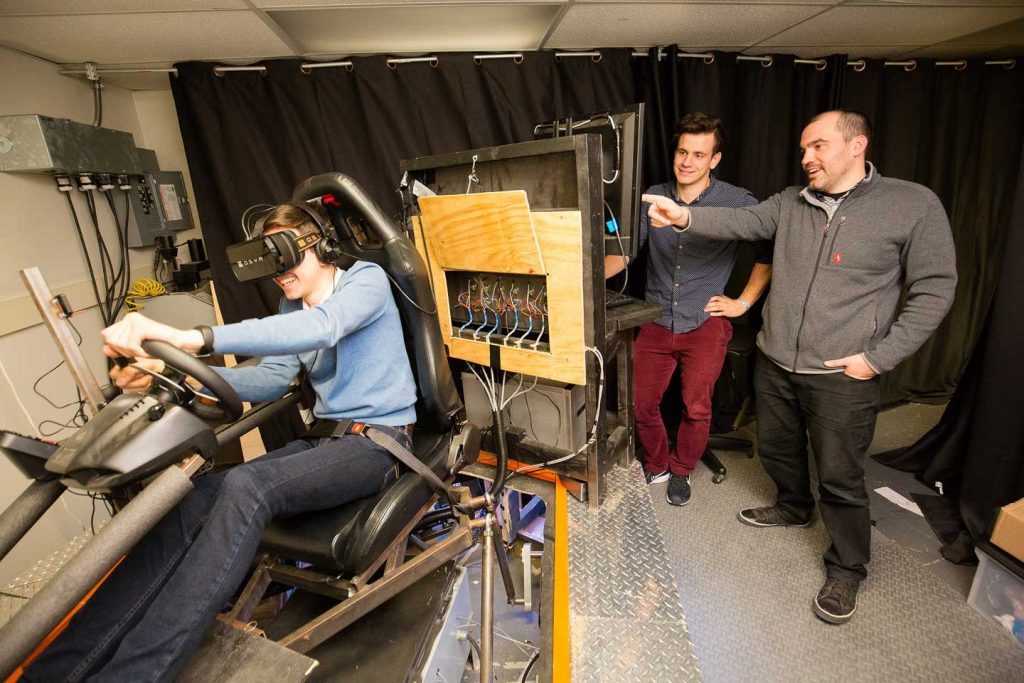 At the start, the simulation included a stretch of 400 meters of road that repeated over and over, with a deer placed randomly on either side of it. Deer motion was controlled by multiple variables, including where it will turn, the amount of time it has traveled before it decides when to turn again, deviation from where it will turn, and acceleration of its approach.

All parameters are stored in “generation files” that describe the deer’s motion model. Ten deer in the simulation were studied in generations, like succeeding herds in the wild, and were put through a genetic algorithm to study how their behavior would evolve.

The goal is to create a deer that’s actually a tough obstacle and difficult for a human to avoid, to achieve as many deer-vehicle scenarios as possible.

“They will dart out in a direction deviated from where they were initially looking,” Cutrone explains. “And then after time, they have that response again. The stimuli hasn’t gone away enough to find a new direction to turn and dart again. That general framework of understanding how deer behave has informed how they behave in the simulation.” 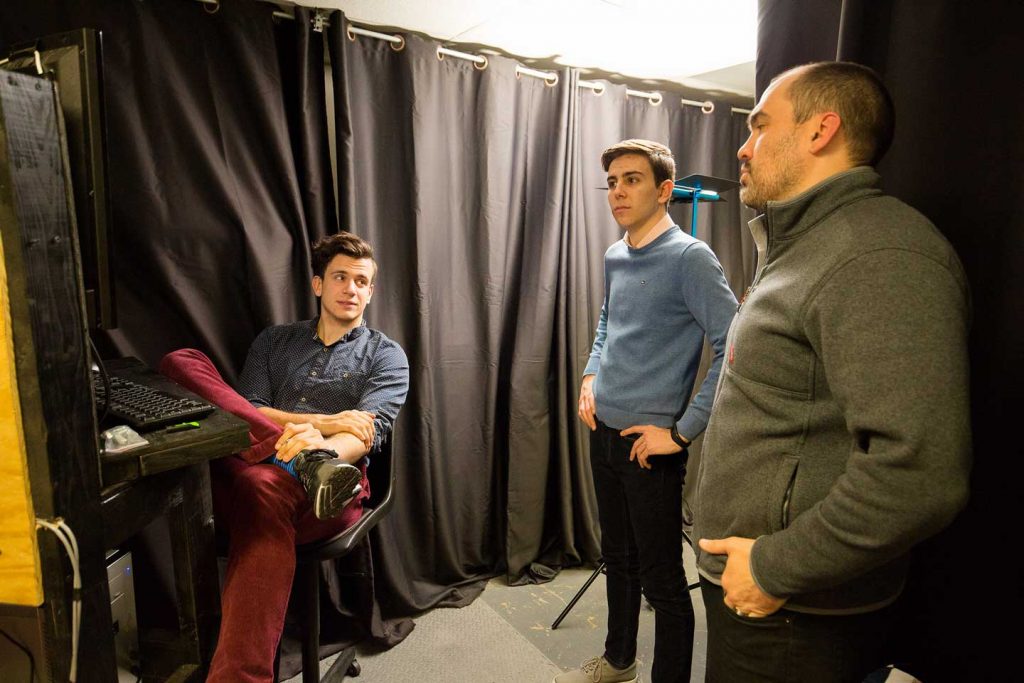 Deer are already a significant threat to road safety and every year cause considerable damage and injury to both themselves and humans.

According to State Farm’s 2017 deer collision report, deer caused 1.23 million car collisions annually, costing an average of $4,135 in property damage claims. Last year most U.S. drivers had collisions with a deer, elk, moose, or caribou in November, October, and December, in that order.

With those statistics, the challenge for the autonomous car becomes even more daunting.

“We developed the hardest task that is objectively difficult for humans to avoid, so that someone who is developing an autonomous cars knows what the autonomous car has to be able to beat,” Cutrone says. 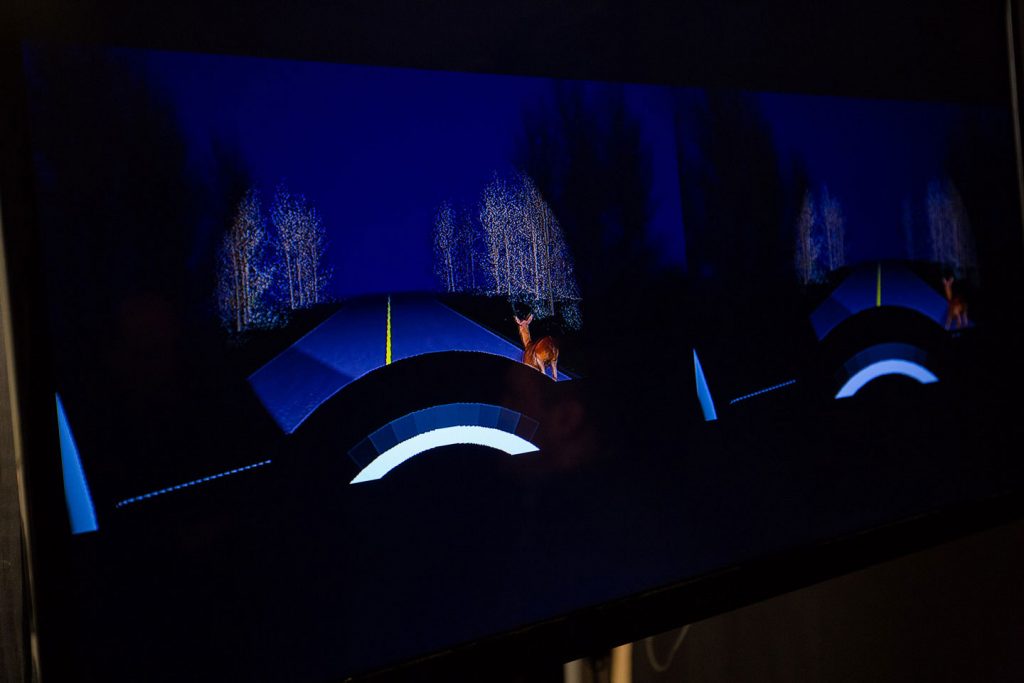 “The paradigm we worked with came from the biological literature, but what Sam did is to make the deer as difficult as possible to avoid so if we have a deer that people are almost always going to hit, it becomes pretty easy to set the goal of designing an autonomous car that doesn’t hit that same animal,” Brown notes.

He admits that work he and his students are performing is just one small piece of an autonomous vehicle pie.

“But it’s an important one,” Brown says.

The industry is looking at all kinds of collision-avoidance algorithms. Deer don’t get a lot of attention because they are a small contributor to fatalities.

“All it takes is one really bad thing to happen for it to become a big issue,” Brown says.