In the first half of the 20th century, two world wars shook the planet to its core. The handful of empires that controlled the largest swaths of the globe crumbled, and from the dust arose the more than 200 nation-states you see on the map today. 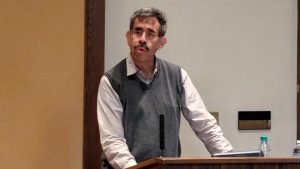 But it wasn’t that easy. Professors Jane Burbank and Frederick Cooper, both of the New York University history department, told a packed Kirby Hall of Civil Rights auditorium that the line from empire to modern nation-state was anything but straight and hardly inevitable. Rather, it was one of many possibilities, and to examine the treaty between the world powers that ended World War I and redistributed nations throughout the globe as the fulcrum from which all of history turned in a single movement ignores much of what happened.

Cooper and Burbank, co-authors of Empires in World History, recipient of the 2011 World History Association Book Prize, explained their view of this pivotal moment in the Richard E. Welch Memorial Lecture. 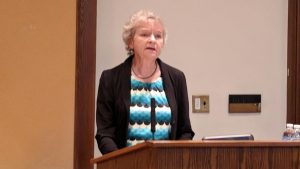 Here are key points from the lecture.

What happened after the world wars?

“The first world war did more than bring about the fall of empires on the losing side. It brought into focus the doctrine of self-determination. That each people, however defined, should have a state of their own. This doctrine was applied selectively after WWI, but after…[it] could not be stopped. It brought about selectively what have today, over 200 nation-states.”

What’s wrong with the idea that those empires fell and then nations rose up afterward?

“We argue that the single story line is misleading,” Cooper said. “It misses the different possibilities that the destructiveness of World War I opened up. The capacities of some empires to fend off challenges and indeed expand. The invention of new forms of empires and the enlargement of the imperial club to include new members. Self-determination produced more chaos than consensus where it was applied, and it was no closer to being a generally accepted doctrine in 1939 than in 1919.”

Why is that view so crucial?

“By looking beyond the perspective of a single pathway connecting the present to a moment in the past,” Burbank says, “we not only open up the perspectives with all their uncertainties, fears, and hopes and constraints of people in their own time, we remind ourselves of multiple possibilities for the future.”

What did the Versailles Treaty do?

“The Versailles Treaty carved up the losing empires,” Cooper says. “Nationalists in Europe drew up boundaries consistent with where their people lived. The decisions in the end were made by the great powers, the victors in the war.”

Was this successful? Did it achieve peace?

“The subsequent efforts to make nations conform to state resulted in what was called at the time the ‘un-mixing’ of peoples,” Cooper says. “It resulted in long-term suffering and chaos. In Africa, the Middle East, and parts of Asia, where subjects were refused the right of self-determination, imperial control remained in place disrupted by outbursts of rage and rebellion.  The direction of change is far from clear. At many points, things might have turned out differently. Had Hitler not come to power. Had Germany won the second world war in Europe, had the Russian Revolution taken a different course, had Japan not conquered most of Southeast Asia …”

“[After World War I] the injection of national self-determination into the post-war empire game was accompanied by claims to imperial status and authority by new players,” Burbank says. “Most material and most assertive and successful entrant into the empire game was Japan.

“The fracturing of one ancient empire in Asia and a world war had led to another empirical ascendency. Still, China’s resurrection after 1949 reminds of the reversibility of imperial fortunes.

“It is tempting to do history backwards. This has led many to regard 1919 as a step on a required path from empire to nation state. We’ve argued instead that 1919 was a year of multiple possibilities for empires. It took another world war to turn anti-imperial imaginings into realistic possibilities. And it was only around 1960 that the nation-state became the dominant alternative to empire for the colonial world. And even in the mid-1980s questions about empire had begun to appear.

“We do not discount the importance of nationalism as ideal in a political movement, but we question the notion that nationalism is the primary driver and explanation of political change,” Cooper says. “We view the nation-state in relation to alternative political organizations. We see nationalism as ideology that operated in political context, and not necessarily in an all-determining way.”