Reflecting one day on his career as an academic, Steve Kurtz realized he was missing something.

“I’m in the shower and thinking about the old adage, ‘Those who can, do, and those who can’t, teach,’” he recalls. “There’s a lot of truth to that. What do I really know as a professor? I’ve been in academia for 23 years, so what do I know, and how can I remedy that?”

For years, Kurtz, associate professor of civil and environmental engineering, had been in regular contact with a former student, Kyle DeLabar ’05. A civil and structural engineer at Lehigh Valley Technical Associates Inc. (LVTA) in East Allen Township, he would keep his old professor apprised of interesting projects.

“I found the company compelling, and one day three years ago I emailed Kyle and asked, ‘Are you interested in a very unusual intern?’ You have to recognize that the private world might look at a 46-year-old professor and say, ‘No thank you, we have no interest,’” Kurtz says. “A 22-year-old engineer is a very malleable thing. Someone my age, well, you could be skeptical of that.”

Nonetheless, Kurtz shed his metal lab jeans and T-shirt and donned an interview suit to pursue an internship at a company that employs four of his former students. It was in many ways a complete role reversal for Kurtz, who’s usually in the position of recommending students for internships and other professional opportunities. 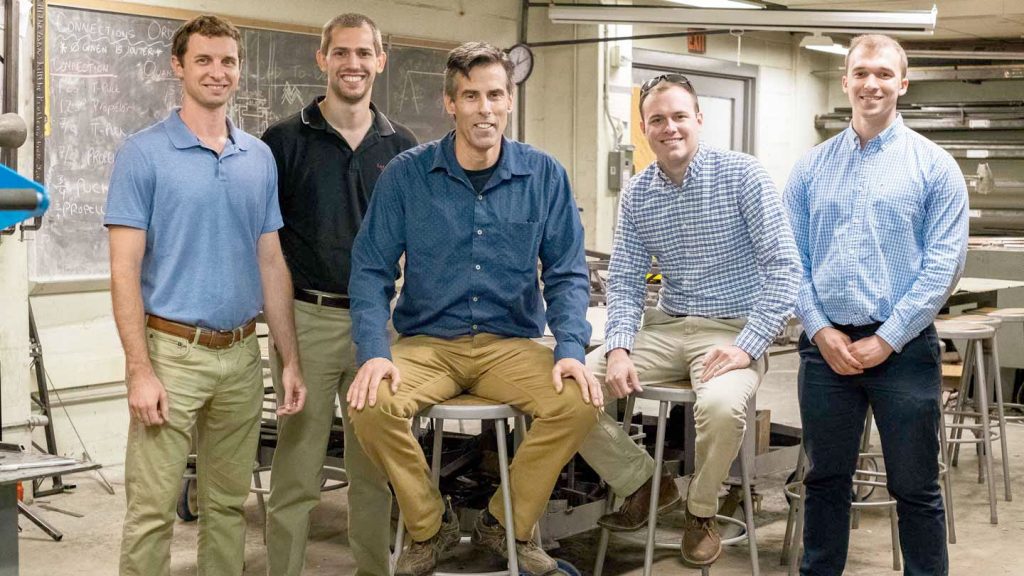 For his former civil engineering students at LVTA, all of them members of Lafayette’s steel bridge team at one point, the opportunity to work alongside their academic mentor took some adjustment, but the rewards have been beneficial all around.

“Steve is a professor whom I hold in high regard,” DeLabar says. “I had stayed in contact with him as we grew as a company and reached out to him for recommendations when it came time for recruiting employees. In talking with him, I learned he was looking to get some more practical experience to try and develop how he’s teaching the next generation of engineers.”

The alignment of skills fit like a well-placed bridge girder.

“He brings to the table the theoretical background that we’re a little weak in, allowing us to go into projects that we may not have been able to pursue without having that experience,” DeLabar says. “The relationship has been very comfortable. I’ll give my two cents, and he’ll give his two cents without worrying about upsetting anyone.”

Daniel Nicholas ’18 says he’s still learning, and having Kurtz around as a co-worker during the summer was an added bonus to his Lafayette education.

“It’s cool to see him every day during the summer and not in the student-professor relationship,” says Nicholas, a design engineer at LVTA. “We did a preliminary design involving horizontal load, and I was tasked with taking his design and changing it. It was a little out of the ordinary. He laughed at me and said, ‘Have fun.’”

Just the opportunity to ask, “Hey Kurtz, what would you do?” has been valuable, he adds.

“It’s also great to work with steel bridge alumni,” says Nicholas, who served as captain of the recent national championship Lafayette team. “Half of the engineers at LVTA are from Lafayette. The boss is a Lehigh guy, but we don’t hold that against him.”

Ken Peoples, principal at LVTA, is irrepressible in his enthusiasm for having Kurtz and his Lafayette engineers on staff, even with a few rivalrous caveats.

“Yes, it’s true that I’m a Lehigh graduate, Class of 1984. The only reason I hire Lafayette graduates is so I have folks to bet with on the Lehigh-Lafayette football game,” he says.  “This seems to have been working out pretty well for me the last few years. We won’t bring up the steel bridge competition.”

As for Kurtz’s work at LVTA, it’s been “a wonderful experience” having someone of his caliber helping the firm with the more challenging projects it encounters, he says.

“For some reason, Steve seems to end up with the more difficult projects,” Peoples says. “I think it’s great that he has an interest in learning more about the actual work of engineers at consulting engineering firms like LVTA.  This kind of experience can’t help but make him a better teacher.”

“LVTA wins in that we get to take advantage of Steve’s design and analysis skills for the summer, and we win again when he helps teach our young engineers while he is here. Steve wins in that he gets to hone his engineering skills on some real-world problems; Lafayette and Lafayette students win in that they get a more well-rounded professor who can apply real-world experience to the classroom.”

For the Lafayette alums, it’s simply a privilege to collaborate as colleagues with their professor.

“It’s nice to be working with the man who helped get me this job,” says Bill Schaeffer ’17, an LVTA design engineer.  “It’s definitely a different dynamic, but the exchange of ideas on a professional level has been great. It’s beneficial for everyone because he gets to see what it’s like in industry and go back and apply that in his coursework with students at Lafayette.”

Eric Himmelwright ’14 recalls the awkwardness of not addressing Kurtz as Dr. or Professor Kurtz. “Now he’s more of a colleague than a professor,” he says. “It’s more of professional-personal relationship than an academic-student relationship, and it’s beneficial for both parties because if we have a question, Steve is well-versed on theory and can step right in to figure out what’s going on.”

Kurtz feels an obligation to present the practical side of engineering to his students, and his internship working alongside former students has helped fulfill that desire. “Kyle’s engineering knowledge is vast. I’ve learned tremendously from him over the past three summers,” he says. “But I’ve also learned a lot from Eric, Bill, and Dan.”

“Ultimately, it’s about improving my day job,” Kurtz adds. “It’s important for students to know why something is so because sometimes in the professional world it’s about getting the job done, even if we don’t know why.”