Why had Sirleaf gone home? asked von Wahl, associate professor and chair of the international affairs program. Sirleaf had been exiled twice from war-torn Liberia, and she’d lost an election to the infamous and now-ousted regime of Charles Taylor. People all over the world were giving up on the troubled African nation. Sirleaf hadn’t. She returned, successfully ran for president, and helped lift her country to heights few had dreamed possible. Why?

“I knew our country deserved better,” Sirleaf said. “I knew our people wanted a better life. And I had the confidence that I could do it.” 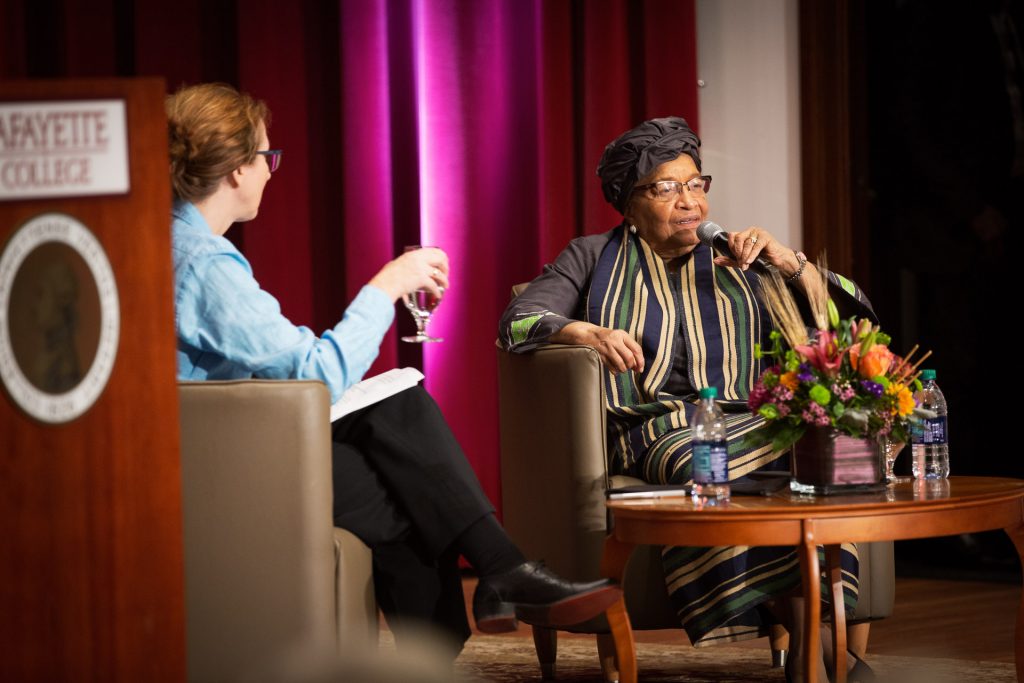 The standing-room-only audience of Lafayette students, faculty, and alumni fell silent, stunned by the simplicity of Sirleaf’s response. Then applause rose to the rooftops of Colton Chapel, where Sirleaf, who’d won the Nobel Prize in 2011 for her work, had come to kick off the 60th-anniversary celebration of Lafayette’s international affairs program.

“Did you want me to say more?” Sirleaf asked von Wahl after a moment.

International affairs major Maria Ahmed ’20 was among the students who met with Sirleaf before her speech.

“It is inspiring that the next generation of Liberians grew up in a stable country with no civil war and violence,” she says. “As I reflect on my country’s situation, Somaliland, and how far we need to go, I am inspired and hopeful that my generation can be the one that steps our country forward.” 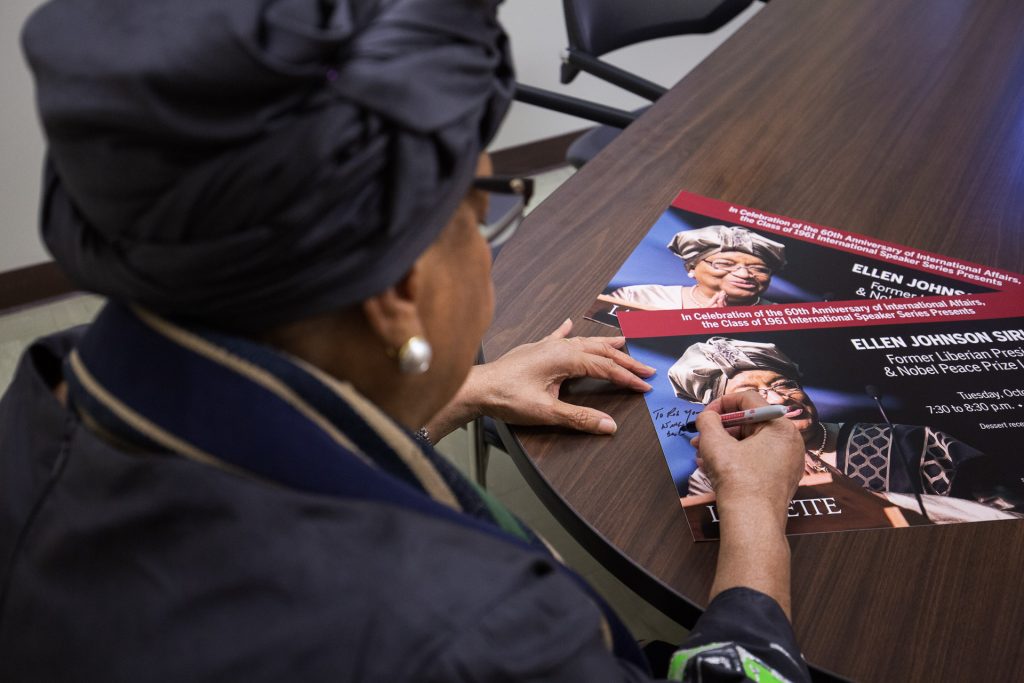 In addition to her speech and question-and-answer session at Colton Chapel, Sirleaf met with Lafayette students and toured portions of the campus on Tuesday. She also visited the McDonogh display on the first floor of Pardee Hall. David and Washington McDonogh were former slaves who attended Lafayette in the 19th century. Washington moved to Liberia where he worked as a missionary.

It’s one of several connections between the College and the country Sirleaf helped lead back from the brink of ruin.

Who is Ellen Johnson Sirleaf?

Sirleaf, the first woman to be elected a head of state in Africa, was president of Liberia from 2006 to 2018. Daughter of the first indigenous Liberian to sit in the country’s national legislature, she obtained a master’s degree in public administration from Harvard before serving as assistant minister of finance and minister of finance in the 1970s and 1980s. She fought with heads of state and was imprisoned, spoke out against the military regime and was imprisoned again before being permitted to leave the country. She went into exile again in 2003 after the Charles Taylor regime accused her of treason. When she returned two years later, Sirleaf was elected president. During her tenure, Liberia saw its unemployment fall from a staggering 80 percent. Foreign investors began to arrive, and the nation negotiated relief for its billions in debt.

She established a Truth and Reconciliation Committee, geared to root out corruption and heal ethnic divisions. In 2011, Sirleaf, Leymah Gbowee, and Tawakkol Karman won the Nobel Prize “for their nonviolent struggle for the safety of women and for women’s rights to full participation in peace-building work.” 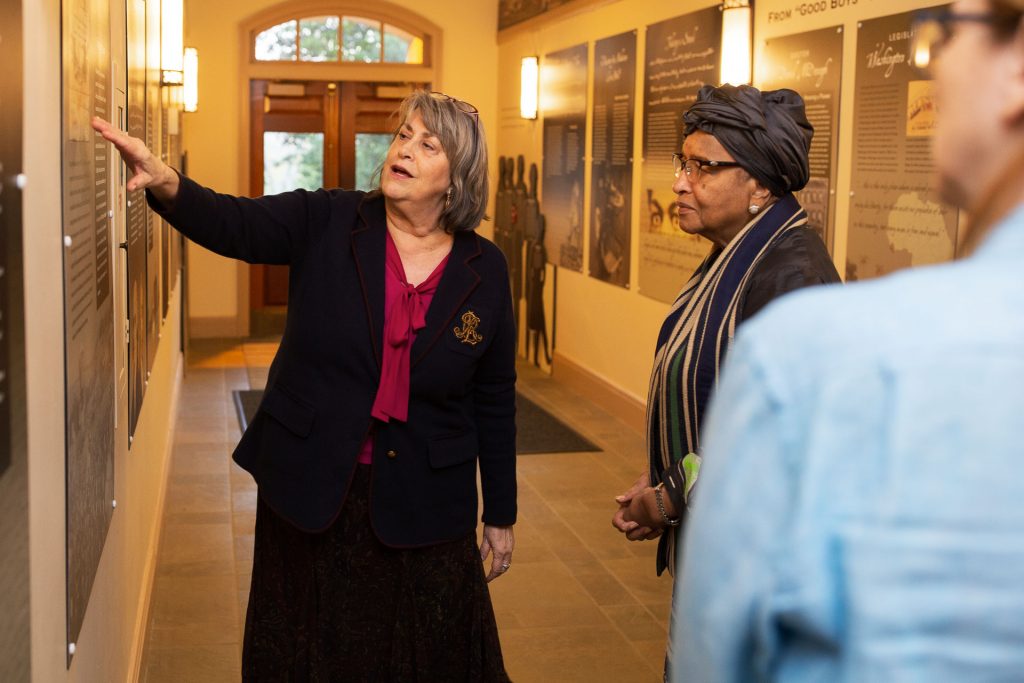 “Her unwavering dedication, hard work, fearless activism, wise stewardship, and vision for the future have made a profound difference in her country, her continent, and around the globe,” von Wahl says.

Why did she come to Lafayette?

Sixty years ago this year, Lafayette launched its international affairs major. Today, it’s one of the fastest-growing programs at Lafayette, and its reputation for preparing scholars to make a better world throughout the globe is well-established. The College will be looking back over the past six decades of international affairs at Lafayette with speeches, stories, and programs featuring auspicious alumni and other dignitaries. Sirleaf’s speech, which was co-sponsored by Africana studies and women’s and gender studies, is an auspicious start.

What does Liberia have to do with Lafayette?

A lot, actually. In 1836, one of the College’s first black students, Ephraim Titler, was a Liberian colonist. David and Washington McDonogh, two former slaves who studied at Lafayette between 1838 and 1844, are featured in an exhibit at Pardee Hall. In 1869, Lafayette issued an honorary degree to Edward Wilmont Blyden father of Pan Africanism, and a former Liberian secretary of state.

Sirleaf would like to see an association between Lafayette and a college in her country.

“A wonderful history, in fact,” Sirleaf said during her speech. “And something that seems to be missing in our own recollection of those many people that left this country with the objective of trying to rebuild my country or get it started. … There’s so much in the roots of Lafayette and Liberia that must continue to be nourished.” 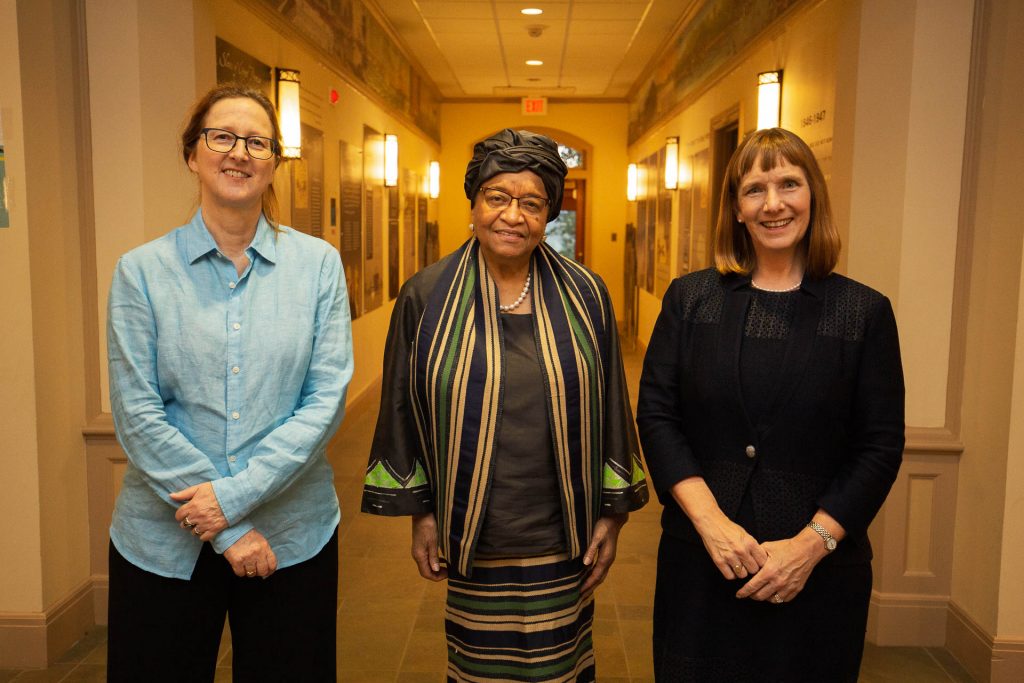 What else did she say?