Widely regarded as the epitome of innovation and entrepreneurship, Thomas Edison, inventor of the lightbulb, reflected on his persistent journey, “I have not failed, I have found 10,000 ways that won’t work.”

Lafayette Association of Visual Artists (LAVA) President Jenn Burkhart ’19 found inspiration in Edison’s persistent spirit and iconic creation. She created a 5-foot-tall lightbulb, which will be on display on the Quad, near Hogg Hall, as a way to commemorate the Dyer Center for Innovation and Entrepreneurship’s inaugural Innovation and Entrepreneurship Week, Nov. 5-9. 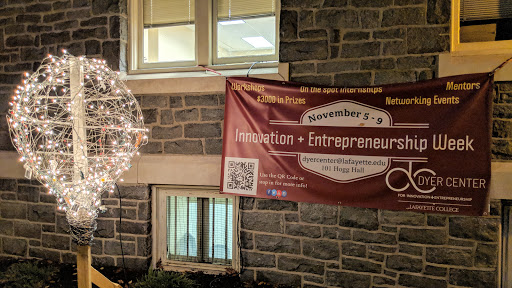 The lightbulb sculpture created by Lafayette Association of Visual Artists.

The goal is to shine the light on Innovation and Entrepreneurship Week, during which time the Dyer Center is holding lectures, workshops, and activities to support its mission of fostering and sustaining a campus culture of innovation and entrepreneurship.

The project began when Dyer Center fellow Alexander Homsi ’19 reached out to LAVA hoping to collaborate on a creative sculpture that would symbolize innovation. Burkhart and the LAVA team started the project in early October, and have been sketching, designing, and creating ever since.

The lightbulb has a wood base with steel wire and Christmas lights. Burkhart, a psychology and art double major, who has been president of LAVA since sophomore year, says to look for the colored lights that say “Dyer” on them.