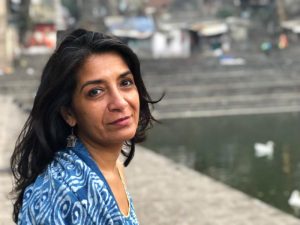 In the 1939 movie Gunga Din, the villains were a secret society of turban-wearing assassins. For many western movie-goers, it was the first time they heard the name “thuggee.”

Today, the word is still popping up—perhaps most infamously in the media and mainstream news as a way to demonize people of color. Simplified to “thug,” it’s an example of how a centuries-old slur has been repurposed for modern-day lexicon, Nandini Sikand told the roughly 100 students, faculty, and staff attending her recent Jones Faculty Lecture in Kirby Hall of Civil Rights.

“Many cultural critics have argued how the use of the word thug has become an acceptable way of using the n word,” said Sikand, associate professor of film and media studies.

The first recorded mention of thug was in 1356 and was used to define loosely organized bands of men who robbed travelers. Then in 1830, a British officer and colonial administrator wrote a letter to Calcutta Literary Gazette in which he described thuggees as bloodthirsty criminals who strangle their victims as tribute to Kali, a Hindu goddess the colonial government did not fully understand. As a result, they overemphasized what they perceived as her violence and sexuality.
“It is the imperious duty of the Supreme Government of this country to put an end in some way or another to this dreadful system of murder by which thousands of human beings are now annually sacrificed upon every great road of India,” wrote Capt. William Sleeman.
Although racialization of thuggees was created as justification for the British to impose colonial rule, the term persists today to vilify black men and portray them as criminals, said Sikand, who was recently awarded a Guggenheim Fellowship.
Cinema’s portrayal of thuggees reinforces the hundreds-of-years-old stereotype, Sikand said, beginning with The Hindoo Dagger in 1909, a 10-minute movie by D. W. Griffith that revolves around a murder-suicide committed with a blade procured from the Orient. Even though there are no thuggees in the film or even South Asians, the simple presence of the dagger itself creates danger. From there, Hollywood films became more lurid and sexualized with their portrayals.
As in Gunga Din, the release of Stranglers of Bombay in 1959 and The Deceivers in 1988 feature turban-wearing thuggees chanting “kill, kill” while pulling taut white scarves of death, further sensationalizing the ways in which the thuggees have been portrayed.
“This is true! This actually happened!” the narrator in the trailer for Stranglers exclaims as images flash across the screen of bare-chested Indian men strangling women and pillaging military camps. These depictions, which now may seem humorous to some, have shaped and continue to shape conceptions of men of color, Sikand said.
“The portrayal of the sexuality and libidinality of thuggees has become more and more marked over time,” she said.
The term has even wound its way into politics. At a rally in Kentucky, Donald Trump accused Democrats of wanting to open America’s borders and turn the country into a “friendly sanctuary for murderous thugs.”  And President Obama, who has been described as a “political thug” by his opponents, used the word in 2015 to describe looters in Baltimore in the aftermath of the police shooting of Freddy Grey.
Sikand noted hip-hop artist and activist Tupac Shakur’s efforts to reclaim the word. “Shakur struggled with racialized masculine terminology all of his life and had the words “Thug Life” tattooed across his abdomen.”
In a video clip of Shakur that Sikand played to conclude her talk, the late rapper explains the meaning behind the ink.
“T-H-U-G-L-I-F-E: the hate you gave little infants … Meaning that what you feed us as seeds grows and blows up in your face,” speaking to the damage done by such racial slurs.
The lecture was sponsored by the Thomas Roy and Lura Forest Jones Faculty Lecture and Awards Fund, which was established in 1996 to recognize great teaching and scholarship at Lafayette.