In December 2010, Margot Lee Shetterly and her husband were paying a holiday visit to her parents’ home in Hampton, Va., when her father, an atmospheric research scientist, started talking about some of the black female mathematicians he worked with at NASA Langley Research Center.

It was familiar terrain for Shetterly, whose upbringing exposed her to a robust community of African Americans working in math, science, and computing in the early days of the space program.  She never considered it a big deal.

But her husband was stunned.

“Why have I never heard this story?” he asked.

His reaction caused Shetterly to rethink her own assumptions about race and gender during that time. Why were there black women at Langley in the segregated south in the 1950s? she wondered. Who were they? How did they get there?

In 2016, she published her first book, Hidden Figures: The American Dream and the Untold Story of the African American Women Mathematicians Who Helped Win the Space Race, which told the story of Mary Jackson, Katherine Johnson, and Dorothy Vaughan, three of hundreds of African American women responsible for NASA’s success during the space race. Johnson was a mathematician who helped put astronaut John Glenn into orbit by calculating flight trajectories. Vaughan was a mathematician turned computer programmer who became NASA’s first African American manager, and Jackson was another mathematician who became an engineer after fighting in court for permission to take the required classes at an all-white school.

The book was adapted into an Oscar-nominated film and was this year’s common reading for the Class of 2022. 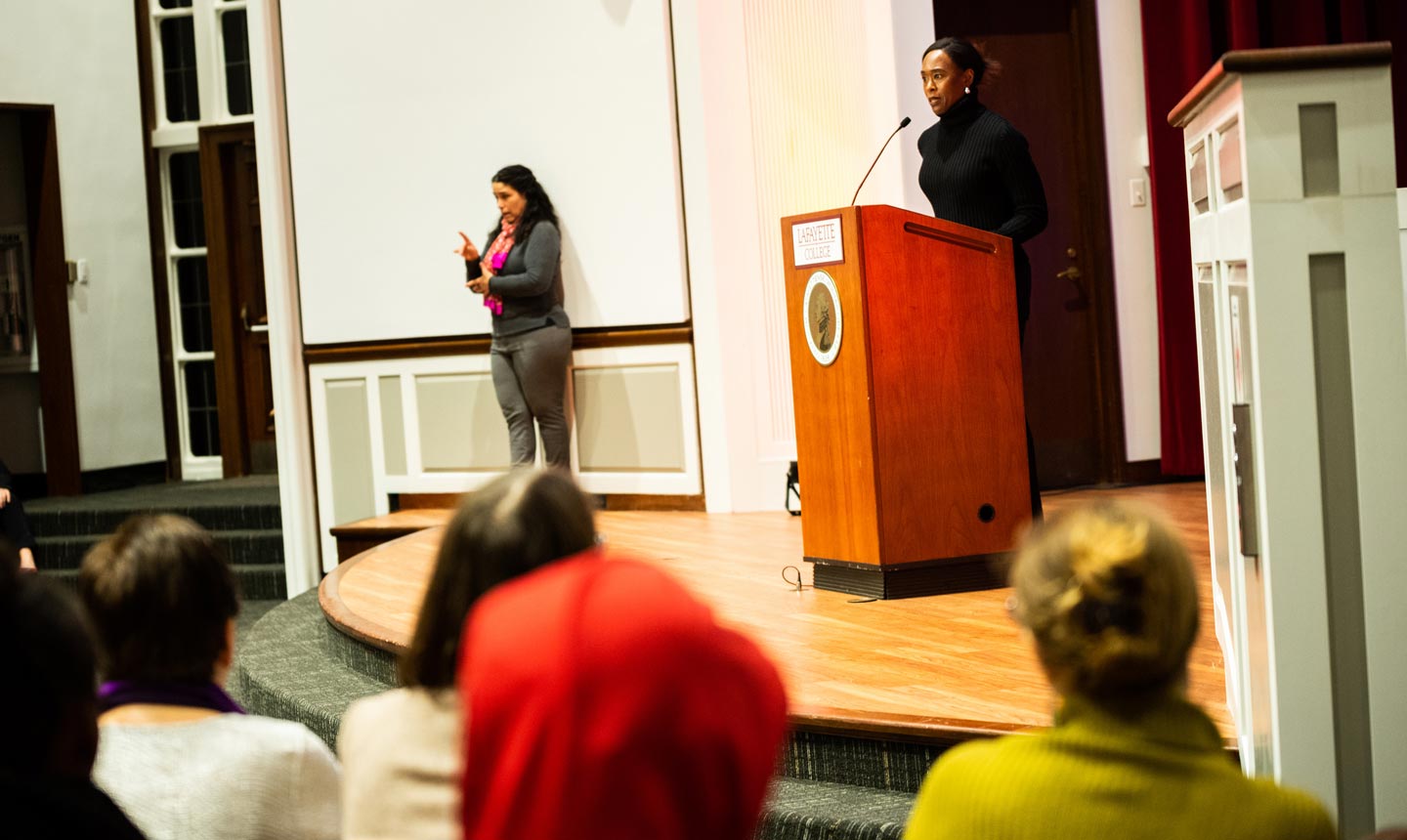 On Wednesday, Shetterly came to Lafayette to deliver the annual Resnik Memorial Lecture, named in honor of astronaut Judith Resnik, who died in the Challenger Space Shuttle disaster in 1986. Before a packed Colton Chapel, Shetterly said Hidden Figures is a story that belongs to everyone.

“It’s a black story, and it’s a woman’s story,” she said. “It’s a story of mathematicians. It’s a story of space geeks and engineers and of mothers. And mostly, I see this as an all-American story.”

She also gave a shout-out to Lafayette’s engineering program where 40 percent of the students are women.

We spoke to Shetterly before the lecture about the movie—she thought it rocked—what got cut from the book, and how after a career in investment banking on Wall Street she finally found the courage to become a writer.

What impact do you think the women in the book have had on other women pursuing STEM careers?

I have been amazed at the endurance and strength of the response to the story and these women. And I think it’s because even today women in STEM fields tend to exist in something of a blind spot.

I think that’s changing, and there’s a lot of work being done to change that. But I think we still have this idea that scientists look like Einstein with crazy hair, and so to see these African American women doing this in the ’40s, ’50s, and ’60s is an eye-opener. And I think it says to women today, “I’m not the first, I’m not the only. I’m part of this long tradition even if I didn’t know about it.” And these women did this when local Jim Crow laws enforced segregation and discrimination. These women were able to come into the workplace to face those barriers and to have long-term successful careers. So I think it’s a real model for women today to say, “Well, I don’t have to reinvent the wheel as the first person,” which takes some of the pressure off.

Be less afraid of failure. When you’re working hard and doing your best and being good at something and progressing toward a goal, you almost inevitably run into failure. There was an article in The New York Times Magazine a few years ago about a woman who had gone to either Yale or Princeton and had done well in engineering, but not well enough in her mind.  I think women believe they’re not good enough, where men are like, “Hey, I took my dings, I got a C, I’m smart, and I’m going to keep plowing forward.: Women don’t do that. As women, we should be like, “You know what, I got a C, but I love this, and I’m just going to keep going. I’m not going to take this one setback as evidence that I’m not fit for this career.” Perfect is often the antithesis of excellent. In order to be excellent, I think you have to fail. You have to see things a different way. You have to skin your knees. That is so hard for us as women. 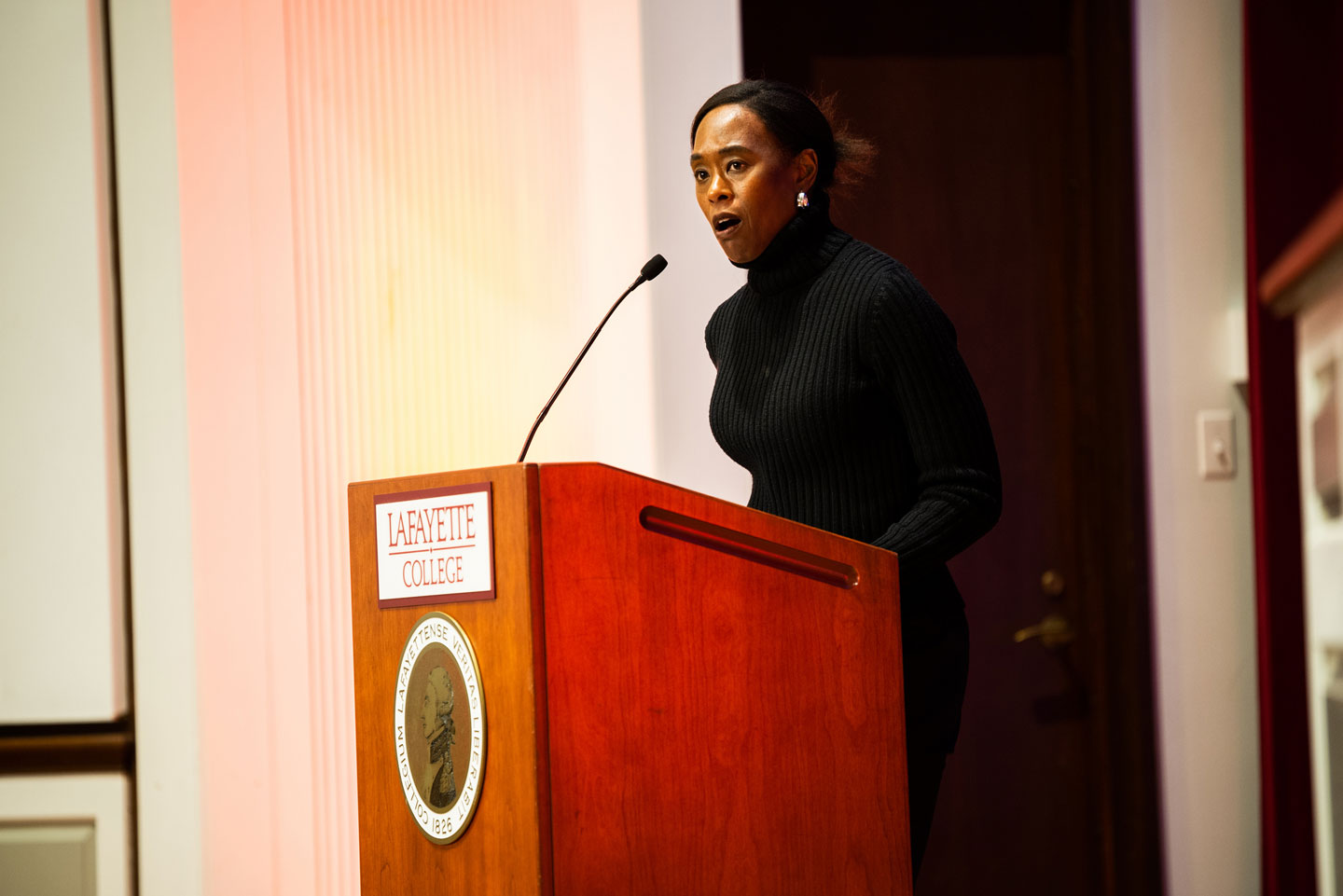 What gave these women in the book the courage to pursue their passions and break racial and gender barriers?

There was a certain amount of self-selection. To become a mathematician, go into a workplace where it’s mostly men—it’s in the south, it’s a segregated bathroom—I think that takes a certain kind of person. I think there is also something to the fact that they weren’t hired individually but as a cohort. They got to see that there were a lot of women doing math, a lot of black women doing math. There’s strength in that. We see it in women’s colleges where a higher percentage of graduates are engineers and mathematicians compared to coed institutions. The women in the book were so good at math and science. Once that door opened, they found a perfect fit for their talents.

What didn’t make it into the book?

Oh gosh, there was so much. My childhood bedroom is full of boxes containing notebooks and documents. One of the stories that I really loved I mentioned in the epilogue. So originally the book was going to continue from 1969 through 1981. My editor was like, “You’ve got to cut it,” and she was right. But it meant losing the story of Mary Jackson, who was promoted to a GS-12 and kind of topped out. She decided to end her career in human resources because she was like, “Listen, I’m at the end of my career and my benefit after 25 years at NASA is that I can pull other women up the ladder.” She took a demotion to fill the position of Langley’s federal women’s program manager. Her whole job was to help promote the next generation of NASA’s female mathematicians, engineers, and scientists.

You went into investment banking after graduating from University of Virginia because you didn’t know how to become a writer. When did that change?

I would say the story found me, and everything I’ve done to this point prepared me for doing this even though I didn’t know it. I was a voracious reader, and I always loved writing. But I didn’t know any writers, I didn’t understand how you became a writer. Everyone I knew was a scientist or a teacher. It was Hidden Figures that turned me into a person who considers herself a writer.

How did you select the title?
There were many titles that came before Hidden Figures. They were fine but not as good or as succinct. In the very beginning I applied for a bunch of grants using these different book titles and I go back through my computer and see some of this stuff and go, “OK, that was terrible.” Hidden Figures was one of those things that just came to me.

Your book and the movie came out at the same time in 2016. How did that happen?

This was my first book, and having your first book published is what every author dreams of and then to have it made into a movie is really kind of a lightning strike. I started researching in 2010, and by 2014 I had done enough research to find a literary agent, which I did, and she sold the book to Harper Collins. A couple weeks after that, I got a call from someone named Donna Gigliotti, a film producer who had gotten a hold of my book proposal. So this Donna person, as I thought of her at the time, calls me up when I was at Food Lion grocery store. She says, “We’re going to make a movie out of your book.” This is 2014, a month after I found a publisher. I said, “You understand there’s no book. There’s a book proposal.  And who are you?”

Turns out this Donna Gigliotti is an Academy Award-winning producer of Shakespeare in Love and the Silver Linings Playbook, and she’s one of a very small number of women in Hollywood who has the power to greenlight a film. I agreed to let her option the book proposal. I didn’t know if it was the best thing that had happened to me or the worst thing. I was a first-time author, I had never written a book before, and I am trying to finish it ahead of a freight train of a movie that Donna was pushing forward at record speed.  It would have been one thing if I had agreed to a portrayal of my life, but what I had agreed to was a portrayal of the lives of other people. I knew if something went wrong with this movie, I’d run into them in Food Lion in Hampton. Anyway, Donna hired me as a consultant, and I also got executive producer credit on the movie. It was a crash course in what it takes to adapt a nonfiction story into a movie.

Was there anything in the film that didn’t happen?

Kevin Costner’s character, Al Harrison, who was a composite of several people, never smashed the “colored” sign over the bathroom with a sledgehammer. It just didn’t happen, but it was satisfying to watch.

And Dorothy Vaughan never learned to drive. She never got her driver’s license.