Jovante Anderson ’19 won the Young Writers’ Prize for Poetry at the inaugural celebration of World Poetry Day in Jamaica this year. A native of Kingston, Jamaica, Anderson is a double major in English and anthropology & sociology. He also is the second recipient of the Lafayette-Jamaica Scholarship, established in 2015 following Jamaican Prime Minister Portia Simpson Miller’s visit to the College the year before. The following are highlights from an interview with him. 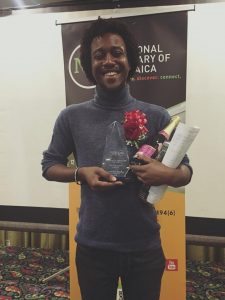 The moment he knew he wanted to be a writer

My grandmother was an avid reader, and our house was filled with books. I was 6 or 7, and I would rummage through her books. I remember finding Jamaica Labrish by Jamaican poet Louise Bennett-Coverley. She made me laugh, and I would read her for hours and try to write just like her. I loved how musical her words were and the images she conjured.

The moment he knew he could write

My teachers always noticed I had a penchant for writing and fostered that. In 11th grade I took the Caribbean Examination Council Caribbean Secondary Education Certificate English exam. I had to write a narrative as well as a descriptive-type essay. I was so nervous. My essays placed second in the Caribbean! I thought maybe I needed to pay more attention to my writing. If people think there’s potential here, maybe I need to think that too. After that, writing became a way to understand myself and the world around me.

The moment he decided to come to Lafayette

College was never on the radar. I’m the oldest of six, and I didn’t want to burden my parents. They don’t know it, but I saw myself working first and then going to school. But I got connected with Nicole McLaren-Campbell, a well-known college counselor, and she said, ‘Nope, you have to go to college.’ She connected me with (former assistant director) Alex Bates in admissions. He came to Jamaica, and I absolutely loved him. Here was this person who not only was interested in my grades and extracurricular activities, but he wanted to get to know me. The other college interviews felt really structured and impersonal. That inspired me to pursue this college application thing. I felt like if I went to Lafayette, I would encounter more people like him.

The moment he decided to enter the Young Writers Competition

I would post my poems on social media a lot, and I look forward to feedback from my friends. One of them, Waseme Blake, sent me information about the competition. At first, I was like, ‘I’m not entering this. I’m not good enough yet. No thanks, but that’s sweet of you to think I am.’ A couple days before the deadline, I decided to give it a try. I was also taking Professor Megan Fernandes’ poetry class and thought after all this time learning about poetry and being in community with people who like poetry, why not take their feedback and put it into writing some poetry for this competition. Three days before the application was due on December  1, 2017, I sat down and wrote six poems and submitted them.

The moment he found out he was a finalist

I would check my email every day, and in March I found out I was one of four finalists. The others were a high school student, a high school teacher, and a graduate student from Oxford University. They wanted me to come to Jamaica to the award ceremony, which was at a hotel. I secretly didn’t want anyone there just in case I didn’t win, but all four of us were feeding off each other’s energy and became friends really quickly.

The moment he found out he won

Lauren Delapenha, the graduate student, and I tied for first place. Jamaican Poet Laureate Lorna Goodison and poet Edward Baugh presented the awards. Ms. Goodison was so tender with us. She wasn’t putting on a show. It felt like she genuinely wanted to be with us, and for her to say the future of Jamaica’s literary world was in good hands is something I’ll never forget.

The rest of his life

Currently, I’m applying to Ph.D. programs to further my study of gender, race, and sexuality in the Caribbean. I’d like to be a professor, and I’d also like to write books of poetry; maybe even a novel, we’ll see!

Of the six poems Anderson submitted for prize consideration, the below is his favorite:

after the last word

after the incredible whiteness

of lilies and lace,

there is the breaking of bread.

here is the fish that you feed on,

embalmed in vinegar and thyme,

resting silent in this ceramic grave,

eyes agape, gasping as if i died

the sacred, or else sashaying uptown

and seasoned in the quietness of genteel

company. witness this simple life, how i

dare to breathe, even as murderous tongues

make a meal of me.

Jamaica is a place of paradox—where raunchy dance-hall music blares into the morning minutes away from a Pentecostal church service, where the rhythm of Patwa clashes with the seriousness of Standard English, where universities with buildings towering like giants are juxtaposed with makeshift houses on the same street. Jamaica is a clash of contradictions. Its language, too, is pregnant with ironies.

‘Fish’ in Jamaica is a homophobic slur. The etymology of the word ‘fish’ as a slur is unclear, but as cultural critic Carolyn Cooper has argued, it suggests a sexlessness and genderlessness which then results in the “confusion” in selecting sexual partners, the kind of confusion some might think ensues because romantic queer couples are not thought to have biological complementarity (that is, penis to vagina). It goes further. By identifying queer men as fishes, they are dehumanized and reconstructed as animals living in their own filth, mindless and lacking a coherent subjectivity. Fish is also a central part of Jamaican cuisine, often eaten year-round, but fried fish (eaten with bread, bammy, or bun) is especially popular during Easter on Good Friday and functions as a way to commemorate the crucifixion of Jesus Christ. It is incredible to me that this one word encapsulates the (Jamaican) ways that language is overlaid with multiple meanings, often unconsciously, as language flips and buckles and sways out of our cognition. That fish is both a widely enjoyed dish and a homophobic epithet is jarring to me.