What’s the focus? Both courses provide a historical perspective on baseball, through which students explore economics, statistics, racism, and more. 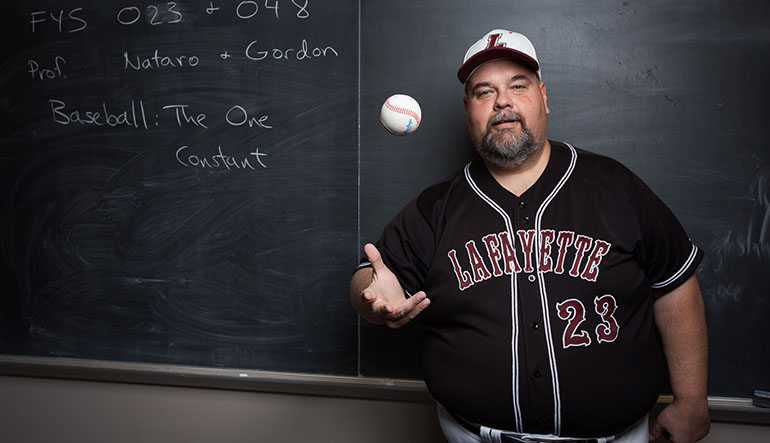 “I’ve always loved baseball,” Chip Nataro says. “I can’t think of a time where I didn’t play, coach or watch the game.”

Stats at work: “My class is participating in a computer simulation league using software from Diamond Mind Baseball,” Nataro says. “The students drafted teams based on 2017 player stats and play a short regular season on the way to a World Series Championship.”

Cultural exploration: “I love having students learn new things about something they know quite well,” Gordon says. “They find the description of baseball in Japan to be an interesting reflection of Japanese culture, and baseball in Korea is played in a way that represents a reaction against Japanese domination.” 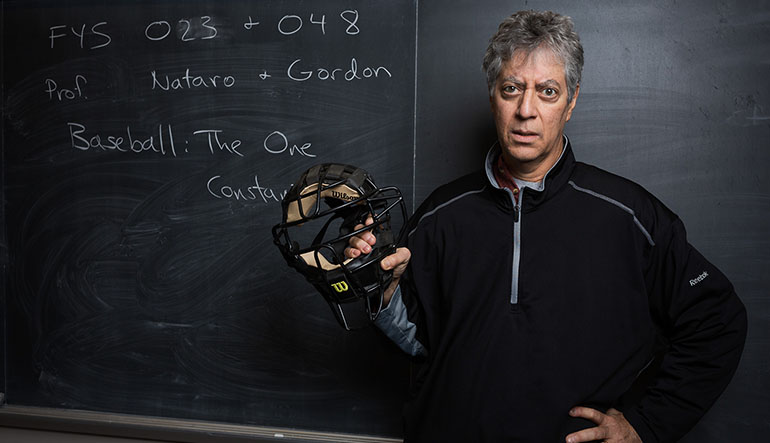 “My dad was a big fan and played some in college,” Gary Gordon says. “He taught me to play, and the combination of the sport and the statistics was irresistible to me.”

Greatest baseball moment: For Nataro, it was being in Yankee Stadium for reliever Mariano Rivera’s last game. Gordon’s is his first game, in 1968, at Yankee Stadium. “It was so beautiful, so green, and so enormous,” he says.

Favorite tradition: Nataro’s is spring training. “The first sounds of balls hitting bats, green grass, the sun in a sky of blue. It’s perfect,” he says. As for Gordon: “I love the recent tradition of every player wearing number 42 on April 15 as a tribute to Jackie Robinson.”

Required reading: Nataro recommends Donnie Baseball: The Definitive Biography of Don Mattingly, and Don Mattingly’s Hitting Is Simple: The ABC’s of Batting .300. (“I might be slightly biased,” he says.) Gordon recently read and enjoyed The Catcher Was a Spy. “I also loved recent biographies of Satchel Paige, Roberto Clemente, Sandy Koufax, and Lou Gehrig.”

Gotta watch: The Kevin Costner trilogy, says Nataro: For the Love of the Game, Bull Durham, and Field of Dreams. For Gordon, the best baseball movies are 42 and The Natural.

Nataro: “… should not sit in the same section as me at a game. I can’t stand it when people get up to leave during an inning or just talk throughout the game.”

Gordon: “… are not completely wrong. One problem is playoff games that end after midnight on the East Coast.”