The planets plan a surprise birthday for the sun. The night is going perfectly until Pluto walks in. The planets feel awkward because he wasn’t invited after his demotion to dwarf, and Uranus is uncomfortable because of their failed summer fling.

It is what Robert Goodman, visiting instructor in theater, calls “a man in trouble,” which is the explanation Jerry Lewis gave when asked to define comedy.

Goodman has been working with students in the new comedy writing course.

Today is dress rehearsal before a two-show run.

Stage manager Jules Holzmann ’19 is preparing props and sets while Gabe Hershewe ’21 is in the booth checking lights. The video files are too big to download, so the rehearsal might not have digital shorts.

Students had to pick their poison: film a digital short, write a sketch, or perform a five-minute stand-up routine.

As the students file in, Goodman gathers them for a warm-up breathing exercise to help calm their nerves. He then plans for the rehearsal as he turns the show over to Holzmann.

The students step backstage. House lights go down. They wait for the first cue.

Goodman has been in the business for over 40 years, working in commercials in Miami, on sets in Los Angeles, and stages in New York City. While he has taught on-camera acting for the College, this class focuses less on comedy and more on how to take a premise, add some wit, and adjust the pacing.

“You can’t teach a person to be funny,” says Goodman. “But you can tell them to stop, take a beat, and start up again.” 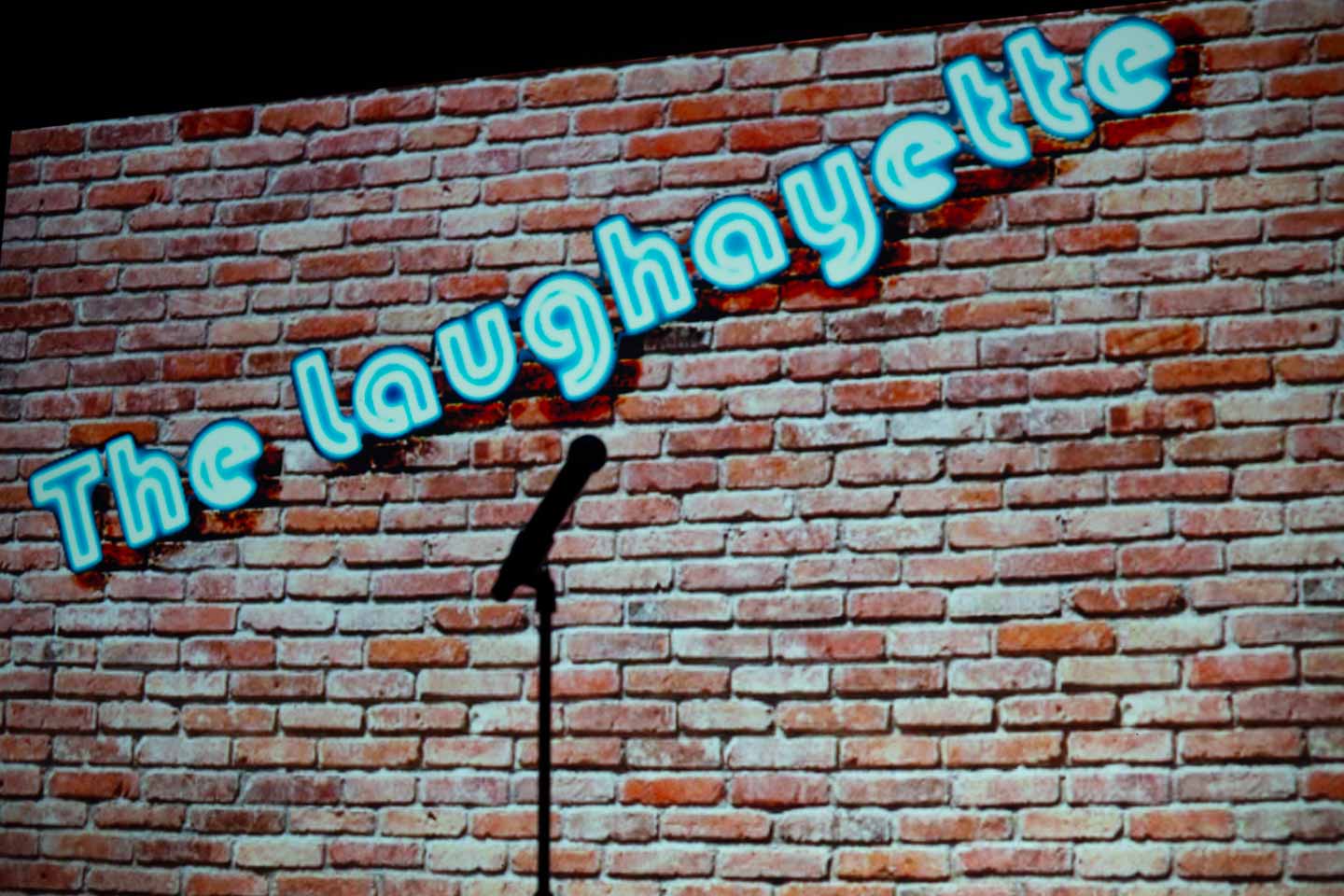 For Goodman, who worked with Paul Newman and was the face of Rug Doctor, humor and comedy are different.

“It’s easy to have a sense of humor and make others laugh, but being funny is about formally preparing material,” he says.

To help prepare, students kept journals, observing the world around them and tapping into what’s funny in situations. They wrote sketches and kicked them around in class, adding and subtracting details that could improve the joke. They practiced improv, freezing each other at opportune moments and switching out different cast members.

All of this is what happens to bring shows like Saturday Night Live to life.

“My hope for the students on opening night is simple,” says Goodman. “Have fun, keep the energy up, and remain aware to what might be.”

He pauses. “And if all else fails, we’ll cut to Civil War footage,” he says. 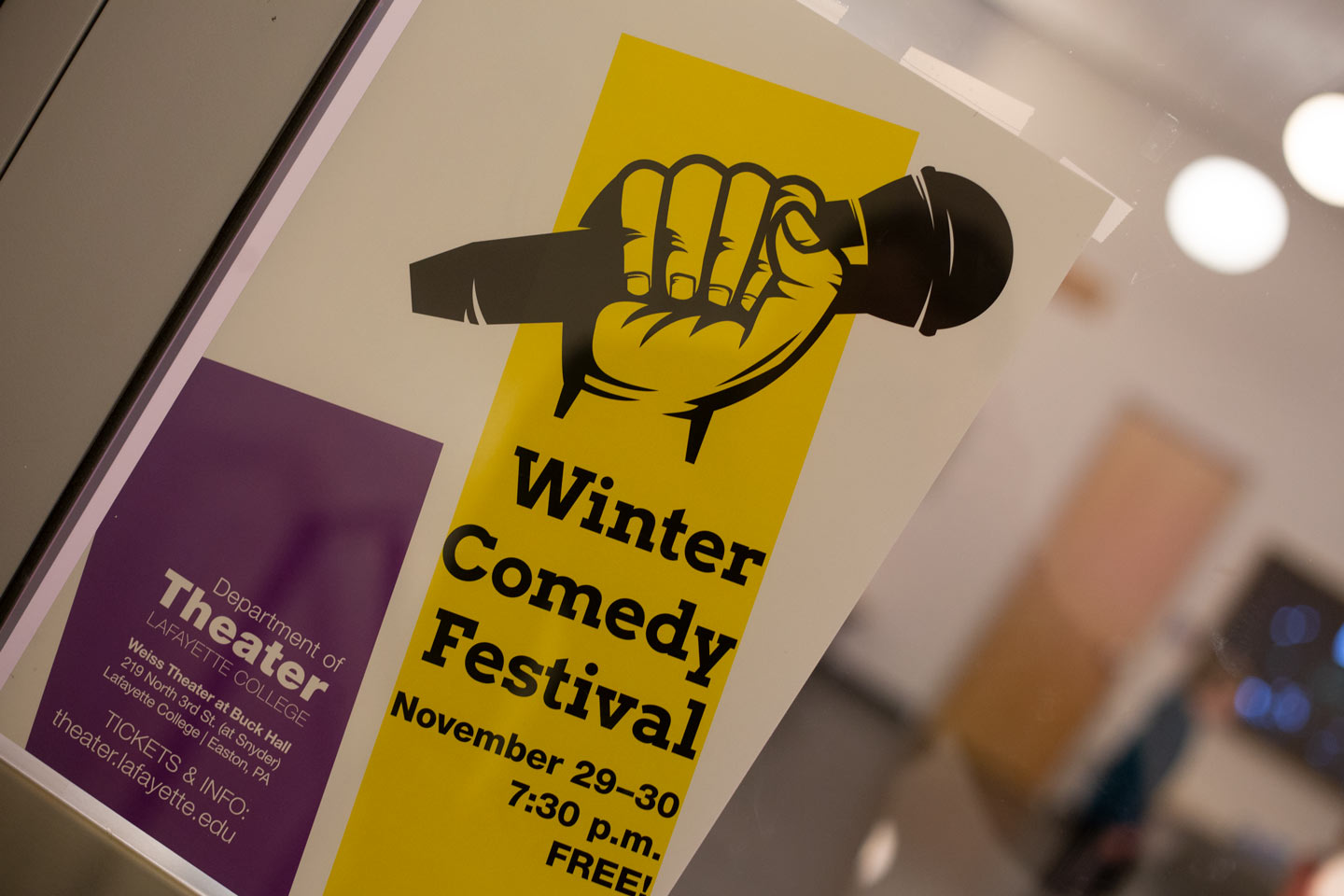 When Holzmann cues the lights up, we find ourselves on the subway watching as a busker annoys all the riders. A service delay then brings other performers to that car, and tensions escalate.

All night ebbs among funny scenes, videos, and, gulp, stand-up.

“It’s not easy to go it alone,” says Goodman. But five students do so, including an English-as-a-second-language performer from Thailand.

Whether through parody, satire, or exaggeration, or whether through self-deprecation, keen observation, or pure politics, each student braves the stage, hits a few punchlines, and knocks out a handful of laughs.

Categorized in: Featured News, News and Features, The Arts, Theater
Tagged with: Comedy