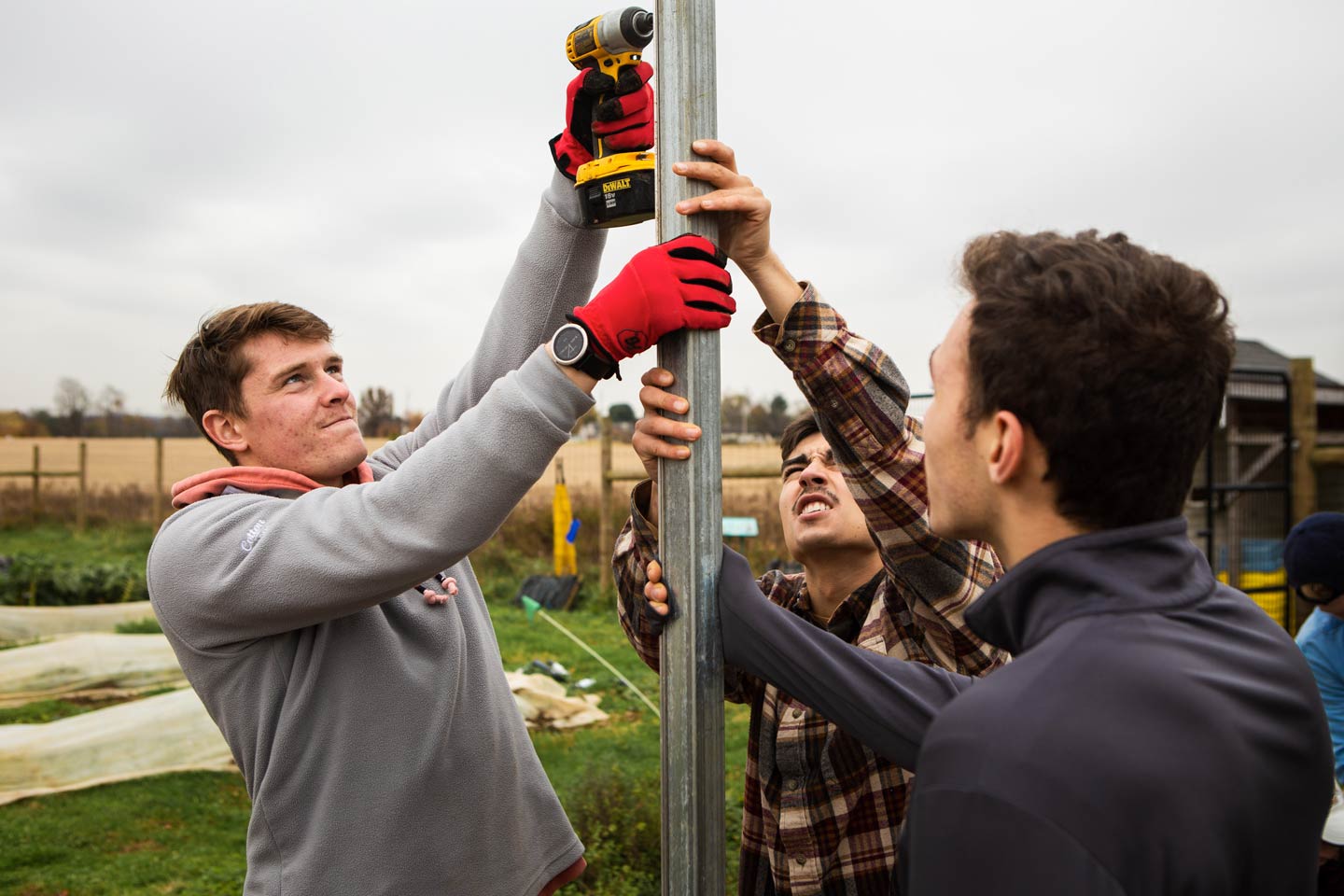 Thanks to LaFarm, the College’s campus farm, fraternities and sororities are able to fulfill their community service hours in a unique way.

But working on the farm has become more than just checking off the service box, says Lisa Miskelly, assistant director of food and farm.

For the past several years, brothers and sisters have had the opportunity to clean up the irrigation system, harvest crops, build raised beds, and spread compost material.

“These students have learned new skills, worked together as a team, laughed, and connected while digging into some meaningful projects,” says Miskelly.

Phi Psi helped with the building of a hoop house, which was funded by LaFFCO, LaFarm’s student organization. The hoop house is 22 feet by 21 feet and will help the farm extend its growing season earlier in spring and later in fall; its only heat source is the sun, and it’s made of plastic, says Miskelly.

“Season extension is important for a farm on a college campus because we want to grow as much as we can while students are here,” she says.

The goal is to finish the hoop house by February or early March, which means the team will be able to plant spinach and kale that will be ready four to six weeks before other greens in the field.

Phi Psi became involved after brother Billy Hennessy ’19, a film and media studies and government and law double major, reserved a plot for the fraternity’s individual use—called The Homestead—to grow kale and other greens for its dining hall.

“When Lisa approached me about service opportunities, the guys and I jumped on them, seeing them as an opportunity to help further the production capabilities of LaFarm while being able to work outside with our hands and power tools,” he says. “You’d be surprised how power tools can persuade guys.”

The hoop house, he says, was a big undertaking.

“We realized the benefits of being able to divide and conquer,” he says. “I really learned the value of teamwork.”

The Homestead has been a success too. The fraternity donated a bulk of its harvest to Safe Harbor Homeless Shelter in Easton and gave the rest to its chef, who prepared house meals with them.

Noa Ramos ’20, a government and law and economics double major, also learned the value of teamwork on LaFarm. Ramos and his Delta Tau Delta brothers worked on the hoop house, which was little more than a framework at the beginning of the semester.

“Not only did we give back to our local community, we became much closer to each other, and we got to see our hard work pay off,” he says. “I feel confident that our partnership with LaFarm will continue into the future because of the work we did this semester.”

Miskelly is excited about lessons in sustainability the farm can teach beyond how to build and harvest.

“We’re proud of the work we did at LaFarm, in integrating curriculum and practice in sustainable food and agriculture for the campus community,” says Delta Upsilon member, an economics major. “We are honored to be able to assist in an environmentally friendly effort that also serves the Lafayette community.”