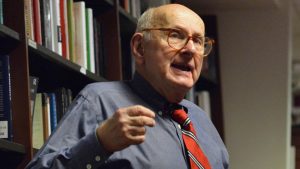 Offner, author of the book Hubert Humphrey: The Conscience of the Country, explains why the former senator from Minnesota, vice president, and 1969 Democratic presidential nominee should be a role model for current political leaders. Despite not being successful in his presidential bid, Humphrey, he explains, was a successful lawmaker who was highly respected for remaining committed to his positions.

Categorized in: Faculty and Staff, Featured News, History, In the Media, News and Features