Easton is paying close attention to a vulnerability assessment prepared by Lafayette College and Nurture Nature Center (NNC), a detailed study that outlines the city’s susceptibility to effects of climate change.

Created with data collected by Julia Nicodemus, assistant professor of engineering studies, and Benjamin Cohen, associate professor of engineering studies, students in their upper-level, project-based Sustainable Solutions class, and with guidance from NNC Science Director Kate Semmens, the assessment concluded that the changing climate has put Easton at increasing risk for damaging flooding and extreme heat. The 59-page study was honored recently by the Lehigh Valley Planning Commission.

Lafayette’s participation in the project over the last year coincided with Easton’s goal to cut greenhouse emissions citywide by 30 percent by 2030 and 80 percent by 2050, a goal endorsed by City Council in May. Both the vulnerability assessment and mitigation goal are part of Easton’s commitment to the Global Covenant of Mayors for Climate & Energy, which was formed in response to the United States’ withdrawal from the Paris Climate Accord.

“Working on this report was a great opportunity for our students in Sustainable Solutions,” says Cohen, who with Nicodemus and their students examined the four neighborhoods of Easton to assess the amount of impervious surfaces and tree cover and map the data using GIS software. “The students built extensive map overlays and brought together complicated data sets to show how climate change will exacerbate current environmental and public health issues in the city.”

Their results showed that the downtown and West Ward neighborhoods face the most risk as a result of climate change.

The downtown, at the confluence of the Lehigh and Delaware rivers, is the most vulnerable in terms of flooding, with a large, vulnerable population, including the elderly.

Easton’s West Ward, while not a flood-prone region, is considered susceptible to extreme temperatures based on its high percentage of heat-absorbing impervious surfaces and low percentage of cooling tree canopies. 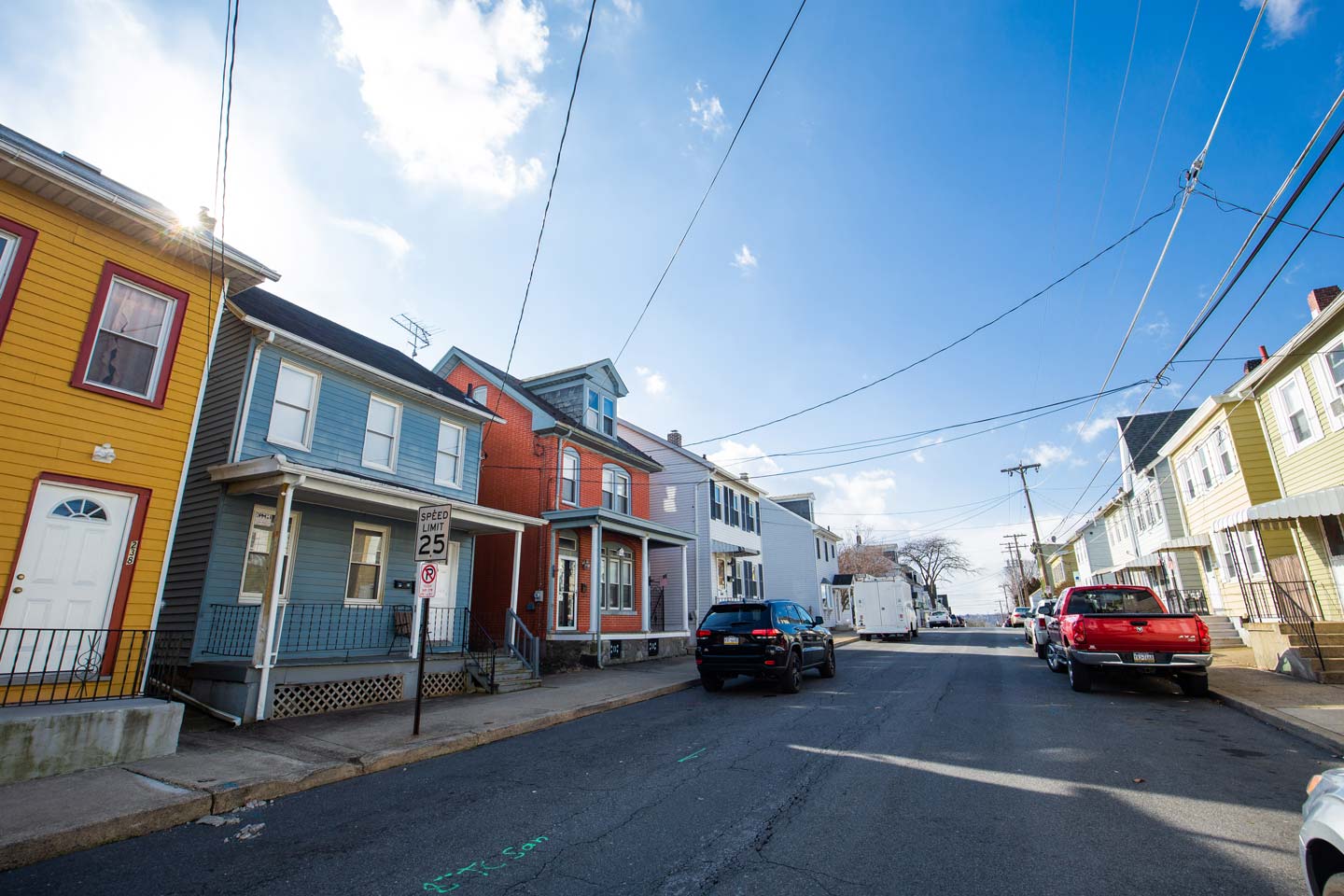 “An extreme heat event would impact this area significantly, more than other areas of the city, due to the large portion of vulnerable populations (poverty and renters) not being suited to deal with prolonged heat exposure,” the report says.

“It’s the kind of project that seems to be a classic engineering studies project because the premise seems straightforward,” Nicodemus says. “And then, once the students get into it, you understand what the heat effects would be, and that requires a tremendous amount of research. Then you have to apply that to Easton and its different neighborhoods.”

As Easton expands its retail and tourism trade downtown, the report leaves much to consider.

For instance, the proposed Da Vinci Science City at South Third Street and Larry Holmes Drive and other potential riverfront development lie in a flood plain, which opens discussions about how to protect property against flooding, Nicodemus notes. During the course of the project, students and their professors worked with city officials to get a sense of their understanding of these issues, researched temperature histories, projections, and emergency plans from other cities, and defined and tracked heat waves.

For the students, the project was exhilarating.

“It was difficult to hold them back,” Cohen says.

“Working on the vulnerability assessment was a rewarding experience,” says Andrew Winn ’18 (engineering studies). “With guidance from Professors Cohen and Nicodemus, our class was given a significant responsibility in putting this report together. There aren’t many classes that end with a tangible product that benefits the community.”

“Clearly, we found that Easton’s risk at facing these events is increasing, and we need to properly prepare for them,” he adds. “Recent history shows how destructive flooding events can be. Unlike flooding, there is no concrete governmental plan to respond to extreme heat events.”

“I wanted to work on something tangible, and this was perfect,” he says. “We created our own syllabus, set goals, and created a detailed vulnerability assessment for Easton and the Global Covenant of Mayors. It’s one of my favorite classes I’ve taken so far.”

Easton Public Works Director Dave Hopkins says the assessment reiterated a need to remain vigilant and stay prepared, especially after the flooding in 2004, 2005, and 2006, the worst the city has seen since the 1950s.

“Another vulnerability we hadn’t considered was high-heat events,” says Hopkins, noting that the Lafayette report identified areas without trees and areas of high impervious surfaces, which can adversely affect the underprivileged and people with disabilities.

The study, he says, also affirmed the city’s plan to plant 150 trees a year along city streets.

“It lent a degree of credibility to having a city arborist,” he adds. “Urban forestry is not always seen as a need when we think of economic development, but having verdant neighborhoods is an important asset.”

Hopkins says the report memorializes the city’s main environmental vulnerabilities and ties them into climate change.

“It’s saying things are not going to get better. The report made us go back and review our internal procedures,” he says. “It’s been 13 years since the last flood. You get busy with other things, so you don’t want to get complacent.”