Forty percent of food in the United States is never eaten, according to National Resources Defense Council. The United Nations says the global proportion sits at one-third. In 2012, the Environmental Protection Agency estimated 35 million tons ended up in the landfill.

Turning those numbers around is easy … in a compost tumbler.

Society of Environmental Engineers and Scientists (SEES) at Lafayette College under the direction of Kyle Low ’20 revived a project that had long sat fallow.

In 2010, SEES won a grant from the Pennsylvania Department of Environmental Protection to implement a composting system for sustainable waste management at the College. After two large Earth Tubs were installed, changes in student leadership stalled the program.

That’s until Low was inspired at a composting workshop led by Miranda Wilcha ’16, compost coordinator for Greater Easton Development Partnership.

“I am a part of Easton as a student at Lafayette,” Low says. “I wanted to get involved in this sustainability initiative and gain real-world experience by leading, problem-solving, and making a difference.”

He had an old manual for smaller composters used on campus when the compost program began in 2007.

He didn’t have a drawing or pricing, so Low got to work.

He assembled a team of engineers and environmentally engaged students. Joanna Ast ’19 and Harrison Zumbrun ’22 began with a computer-animated drawing. Zumbrun worked the software while Ast translated the computer model into hand-drawn building instruction.

“I was happy to see this project revived,” says Ast. “SEES is getting active, gaining momentum, and making an impact on campus by planning larger-scale projects like this one.”

“And it gives us something to do on the weekends that helps the Easton community,” adds Zumbrun.

The main build team leads will be on-hand for the entire day while volunteers start arriving at 9 a.m. for a shift. Those shifts run through 5 p.m.

Each shift starts with a safety reminder, then a pep talk. Arthur Kney, professor of civil and environmental engineering and director of Landis Center for Community Engagement, delivers that talk about being engaged citizens who transfer their educational skills into civic engagement.

The message has already sunk in for most.

Annika Asplund ’19 and Shaneena Alabado ’19 both are fully committed as team leads.

“I would support anything the club does,” says Asplund.

“We live at Lafayette for four years, so it’s important for us to contribute to Easton through community outreach,” says Alabado.

Like them, Sean Trezza ’21 talks while he works with volunteers. He is explaining how to complete each stage of the build tasks: framing, bracing, bearings, and finishing touches.

“I have never seen a planning team so organized,” says Kney.

It has taken a team to get to this stage. Low sought support from student government. Air Products is a strong supporter of SEES projects like this one. Guys in the shop in the engineering division dedicated nearly 70 hours to help prepare materials. And members of several sustainability and environmental groups on campus chipped in.

Low has a history of building these kinds of coalitions. In high school, he joined the environmental club as a ninth-grader. By his junior year he was president and worked to get the school green certified by Maryland Environmental Association.

This project also has put Low in the spotlight. At the 2019 GreenAllies Conference, Low delivered a keynote address and presented a workshop on the compost tumblers project.

His keynote about sustainability was inspirational: the acceptance of what’s at stake, the power to do something, and the bravery to do something unique. His workshop, however, was all nitty-gritty. 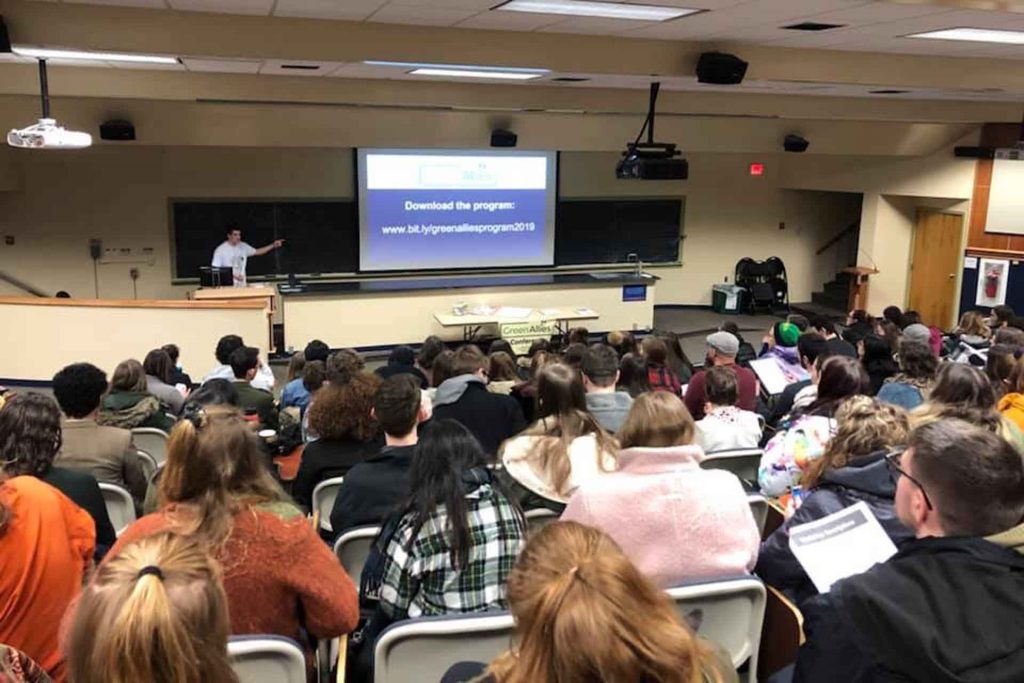 “I opened the workshop with a discussion about composting, but a majority was focused on the logistical challenges faced in putting together the project and how the team overcame them,” he says.

That goal is all but certain for Easton community members. Last phase of the project is delivery. Low and Kney will load the tumblers in a pickup and drop them off across the community as most of them have been reserved by area gardens, nonprofits, a restaurant, and several schools.

The bright blue waste-savers will make for great conversation starters to help spread the nutrient-rich word.