The vibrant colors and striking patterns of a bird’s feathers, a butterfly’s wings, or a fish’s scales aren’t just features we admire. These are adaptations that give animals a competitive edge in the ultimate game of survivor. An animal’s coloration could help it confuse or escape a predator or could help it lure a mate.

But colors are not always an advantage.

As Michael Butler, associate professor of biology, explained during his recent Jones Faculty Lecture, “Colorful Animals in a Challenging World,” there can be downsides to ornamentation. An especially colorful animal, for example, might stand out more to predators or be “bullied” by peers for its distinctive look.

“It’s hard to make it as a critter,” Butler says. “You may not be able to find food. You may not be able to find a mate. You may have a parasitic infection. It’s fascinating to think about color and the role it plays in these factors—how color can be good and how it can also make it harder for an animal to survive. I think it’s a fascinating subject.”

After earning tenure, Butler was selected by the Office of the Provost to deliver the Jones Faculty Lecture, which was established in 1966 to recognize superior teaching and scholarship at the College.

Butler, who studied biology and physics at Bowdoin College before receiving his M.S. in raptor biology from Boise State University and his Ph.D. in biology from Arizona State University, is an organismal biologist with a particular interest in physiological ecology and animal behavior. His primary areas of research pertain to birds. His goal is to better understand how their coloration, immune function, nutrition, and behavior are influenced by the world around them.

One of his ongoing research projects involves studying how birds cope with immune challenges, such as parasites or bacteria, in the wild. His study subjects are tree swallows, eastern bluebirds, and house sparrows that nest in 83 nest boxes at the College’s Metzgar Field Athletics Complex. From May through August, Butler and research students inject the birds with various concentrations of dead bacteria to trigger an immune response without harming the birds. Butler and his research team then monitor the nest boxes and record how often the nestlings are fed by parents. This data enables Butler to better understand how immune challenges impact bird behavior. 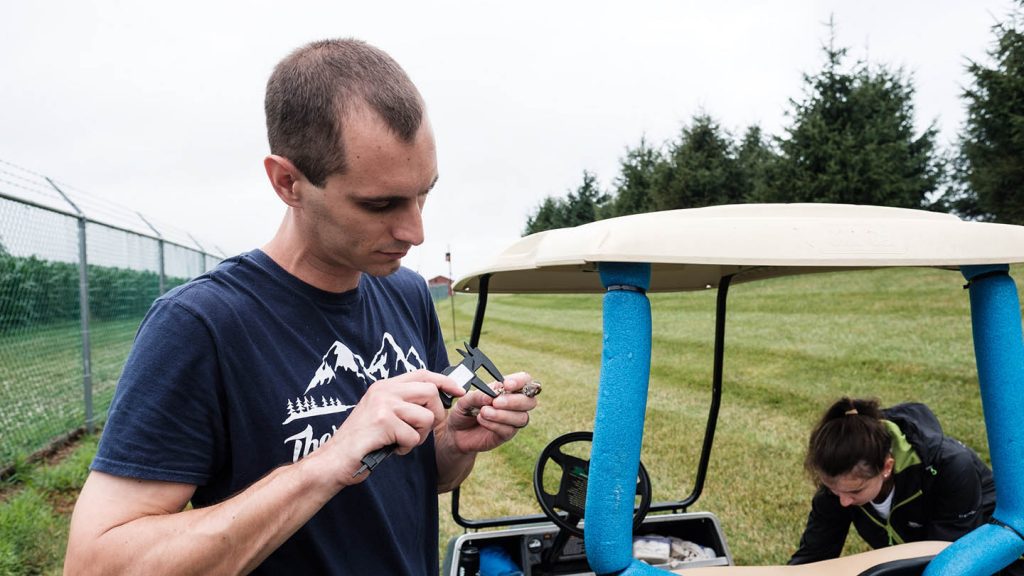 Butler also has used the Metzgar nest boxes to study how birds react to eggs that look different from their own to understand how likely a bird is to accept or reject an imposter egg.

Drawing on his current research and lifelong fascination with the animal kingdom, Butler shared these colorful lessons at the Jones Lecture.

“Green is in the eye of the beholder.”

What is color, exactly? It’s perception, Butler explained. Humans have three color-sensitive cones in our eyes, which dictates how we perceive color. If our short cones are stimulated, we perceive an object as blue; our medium cones process objects as green; and red cones process items as red. Some animals have a fourth cone, which enables them to see ultraviolet light. “This means that animals with this additional cone—birds, fish, turtles, insets—experience color in a way we can’t comprehend,” Butler said. “We aren’t even close to experiencing the colors that an animal can experience.”

When you look at a bluebird, you aren’t seeing blue molecules. “There is no blue pigment, per say,” Butler said. What you are seeing is the result of structural coloration—the nano-spaces between molecules impacts how light is scattered. Those wavelengths of light are then processed by the cones in your eye. It’s the spacing between molecules that cause some wavelengths to scatter more than others. If you change the spacing, the color would change, Butler explained.

“Color can say, ‘hey, you should come and mate with me,’ or ‘you should keep your distance because I’m strong and will protect my territory.’”

But it also comes at a price.

Butler explained that there are maintenance costs: “If you are a bird who needs to constantly preen itself, clean your feathers and remove parasites to maintain your colorful look, that is time you aren’t spending flying around looking for food.” There are also social costs: “If you appear too dominant to others in your group, you might pay a price.” There also may be production costs: “How do we make these colors; is it costly to make the colors in the first place?”