Prof. Len Van Gulick talks about outlook and what it will take Twitter 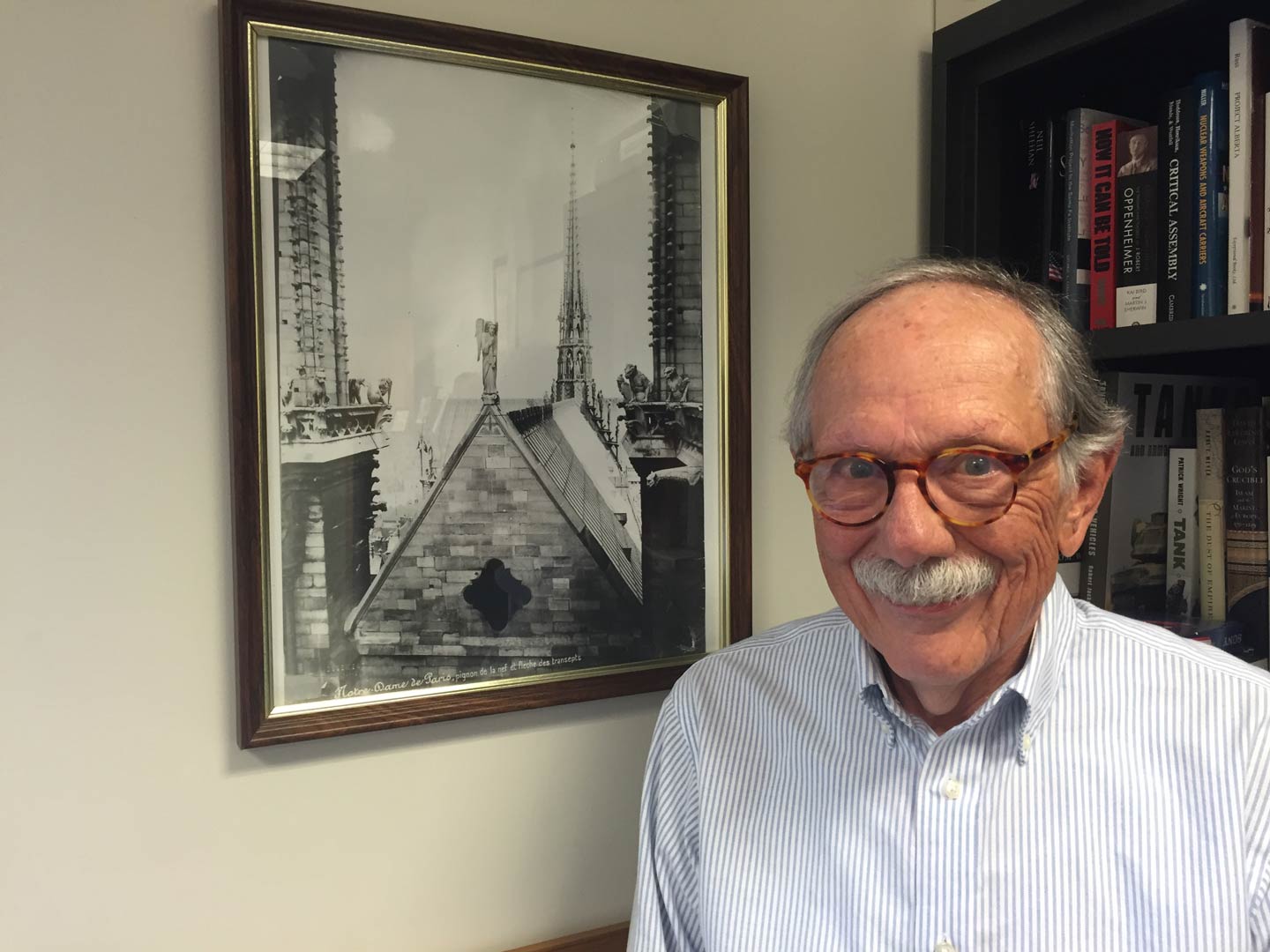 Leonard Van Gulick, who was familiar with the “forest” of ancient timber in Notre-Dame’s attic, held his breath as swirling flames took down the roof of the Parisian landmark, hoping that its limestone towers, which have witnessed nearly a millennia of French history, would be spared.

An expert on medieval and Gothic architecture who has visited and studied the iconic cathedral many times, Van Gulick, Matthew Baird Professor of Mechanical Engineering, followed every development reported by French media, fearful that the entire edifice might crumble.

“I was concerned about what the ultimate result would be,” he said. “For a time it looked as if much of the building might be lost. The fire penetrated into the interior of the north bell tower— there was concern that if the fire had caused the massive bells to fall, they would have destroyed much of the structure underneath them. The western end of the cathedral could have been lost.”

After about 90 critical minutes, it became clear that the building had been saved, largely a result of 20 firefighters who bravely accessed the north tower to suppress the fire there.

In the days since the fire, Van Gulick has been tracking developments concerning reconstruction efforts. His interest in medieval architecture began in the 1980s when Lafayette received a Sloan Foundation grant that allowed him to study with Princeton University’s renowned Robert Mark, professor emeritus of civil engineering and architecture, who pioneered the application of modern engineering modeling to study the structure of medieval and ancient buildings. Van Gulick and his wife, an art historian, have been to Europe almost every year since 1989, visiting Gothic cathedrals and other medieval structures, most of them in France. He’s lost track of how many sites they’ve visited.

By virtue of his collaboration with Mark, who died March 29, and his research into how other damaged medieval European cathedrals have been reborn, Van Gulick is perhaps more hopeful than most about the ultimate outcome at Notre-Dame.

In his office, he has a copy of a photograph by Médéric Mieusement, who documented France’s historical monuments in the 19th century, showing detail of Notre-Dame’s roof, including the spire and statues that conservators removed from it shortly before the fire, a reminder of what was saved and what was forever lost.

He shared his views on what it will take to reconstruct the weakened, vulnerable Notre-Dame and examples of other medieval cathedrals that have suffered damage from fire, weather, and war and rose again.

What immediate actions need to be taken at Notre-Dame?

The vaults are made of cut limestone. Although their upper surfaces are covered with a coating of mortar, they are porous and susceptible to moisture. The first step is to protect them from the elements. Luckily, we’re heading into summer, so there’s no danger of freezing water to cause cracking. First and foremost, the structure must be stabilized and temporary support erected wherever necessary.

Consideration will have to be made before returning to the high-pitched roofline, which stresses the structure during high winds. Beauvais Cathedral, northwest of Paris, suffered two major collapses, the last in the 16th century, and a third now seems possible, probably because controversial wrought iron supports were recently removed from its flying buttresses. You might see temporary exposed supports at Notre-Dame for years as the reconstruction progresses.

Is it possible to recreate the roof structure to its original design?

I don’t think it’s possible to rebuild the roof structure as it was originally. One, the types of trees that were available when the building was originally constructed no longer exist. Old growth forests with 300-year-old trees are not going to be found in sufficient quantities, and the woodworking skills and techniques required to construct something like that may no longer exist.

Medieval and Gothic structures are very susceptible to fire. One of the other important French cathedrals, Chartres Cathedral, about 50 miles south of Paris, lost its roof to fire in the 19th century, and it was rebuilt. It was not rebuilt with timber but a cast iron support structure. My guess is that something similar may happen at Notre-Dame, but with steel instead of cast iron.

Was the latticework attic unique to Notre-Dame?

Many Gothic cathedrals have that kind of roof structure. Notre-Dame was not exceptional.

What is exceptional about Notre-Dame’s design?

Notre-Dame is very significant in terms of the technological progress that took place when it was built. When it began in 1160, it represented a real leap in height—it was 30 percent taller than the Gothic buildings that preceded it. From a technological and engineering perspective, it’s a very interesting building. It was a bold development. Because of its height, flying buttresses became truly necessary. Although architects love to argue about the origins of flying buttresses, Robert Mark firmly felt that it was at Notre-Dame where they first became necessary.

I think that’s optimistic. It sounds good, but I don’t think it will happen in five years. The funds are one thing, but construction resources are not there. It might be a mistake to do it in too hurried a fashion. It’s better to do it thoughtfully.

If the worse outcome had occurred, would it have been possible to rebuild Notre-Dame?

During World War I, several cathedrals were between German and French forces, and they were subject to heavy shelling. Because of their elevation, they were used as observation posts to direct artillery and received heavy damage. After the war, it took a relatively short period of time, less than 20 years, to rebuild them. When we see them today, we would have no idea that what we were seeing is a reconstruction. It would have been in the realm of possibility to reconstruct Notre-Dame.

Are there any cathedrals in the U.S. that were built using medieval construction techniques?

The Cathedral of Saint John the Divine in New York and the National Cathedral in Washington, D.C., both infants compared to Notre-Dame, were essentially constructed of unreinforced masonry using medieval construction methods, although neither has a timber framework supporting the roof.

What has created such an emotional and reverential bond with Notre-Dame?

For one, it’s situated in the heart of Paris. For everyone who visits Paris, this is the one destination that must be seen at least once. It also has a history connected to major events in Paris—Napoleon’s coronation, de Gaulle’s funeral. It has this strong historical connection with France. Like most cathedrals of its age, it still functions as a place of worship. Even if visitors are not particularly religious, they still get the experience of what goes on there liturgically among the faithful.