LogMeIn president and CEO shares his story and advice Twitter

Not everyone would be confident enough to start a discussion in a room full of guests, half of whom are football players, by admitting to being the “slowest Division I linebacker.”

But not everyone is Bill Wagner ’89, president and CEO of LogMeIn, a $1.2 billion dollar cloud-based software company that specializes in team collaboration, customer engagement, and identity protection products.

Wagner spoke about his career trajectory and Lafayette experience with Yusuf Dahl, director of the Dyer Center for Innovation and Entrepreneurship. 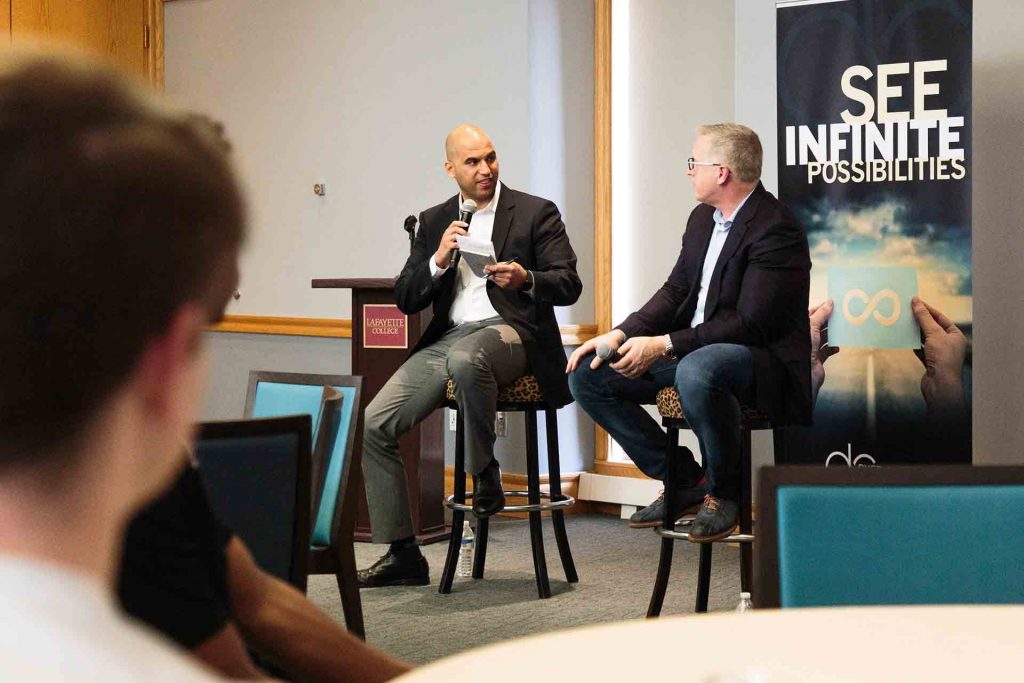 As a guest in the Presidential Lecture Series, Wagner doled out some surprising advice on several topics, reinforcing how his Lafayette education prepared him for a variety of roles and the challenges of leadership. Here are some highlights:

Wagner started as an engineering major, but didn’t know what he wanted to do. He liked math and science so his parents encouraged him to be an engineer. As he studied it, he realized it wasn’t something he enjoyed. But as happens at Lafayette, people can enter your life for a moment and make a big impact. For Wagner that person was  Robin Amesbury ’71, then partner at Arthur Andersen. They met at an event following a football game. Wagner told him how he loved the school and how fun football was but that he was lukewarm about his major. Amesbury told him as an undergraduate, he should do what he loves. That Saturday conversation had Wagner on the phone with his parents on Monday. His mom was in tears as she learned her son would be a history major. She wanted to know if this meant he would be a teacher. He knew what they were sacrificing for him to be there and told her he’d have more options than teaching.

Why Mentors Are Important

The two biggest mentors for him at Lafayette were naturally in the history department. Robert Weiner, Jones Professor of History, opened up the world for him more than any other person, and his honors thesis adviser, the late Richard Welch, professor of history, taught him humility and to better understand his approach to learning. 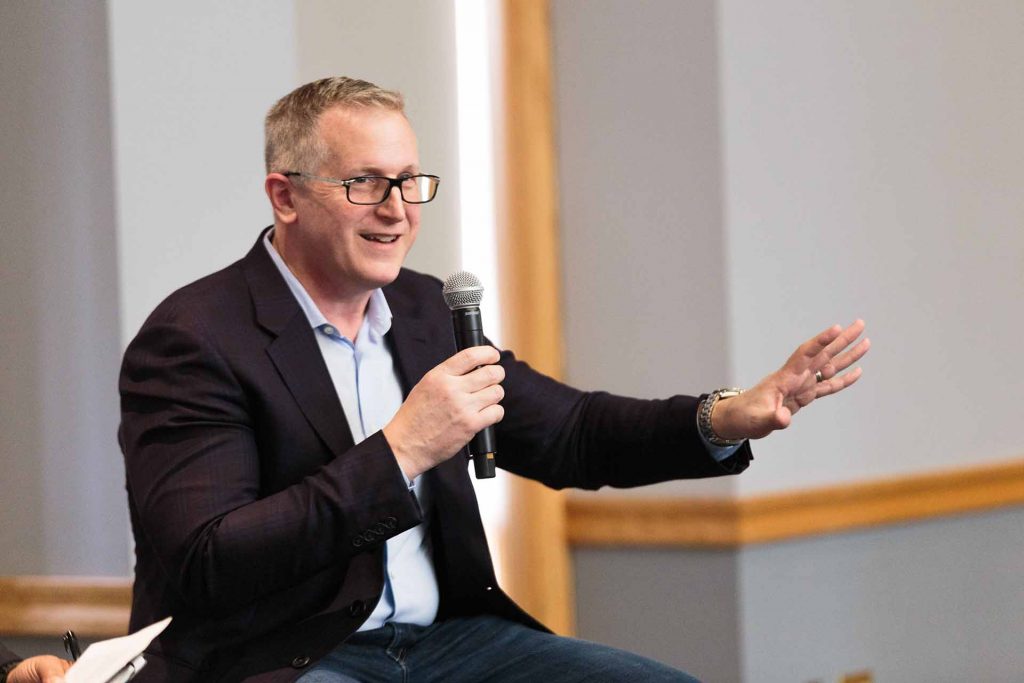 Why a Liberal Arts Degree

Wagner is a proponent of pursuing a liberal arts degree without regard to what you might do later. Why? He named two ways he applies liberal arts thinking to his daily work:

Why There Is No Ideal Path

Upon graduation, Wagner worked for AT&T with the idea that a big company could help train him in sales and marketing. As conversations around the table illustrated a gap in financial knowledge, he took action. A decade after graduating from Lafayette, he went to Wharton for his MBA. But that was his path. He emphasizes that there are lots of careers where you don’t need graduate school. It all depends on what you know and how you want to fill the gaps. With his MBA in hand, Wagner went in the opposite direction and worked for a startup in Blue Bell, Pa., which eventually sold for millions to IBM. From there, he joined LogMeIn, transforming it from $14M a year to $1.2B with 36 offices around the world. The key for Wagner is to get out of your comfort zone. One way he helps others with this is his work with an innovation program in  Boston public schools. He watches as kids transform as a result of their work as CEOs, CFOs, and CMOs while developing and pitching ideas. 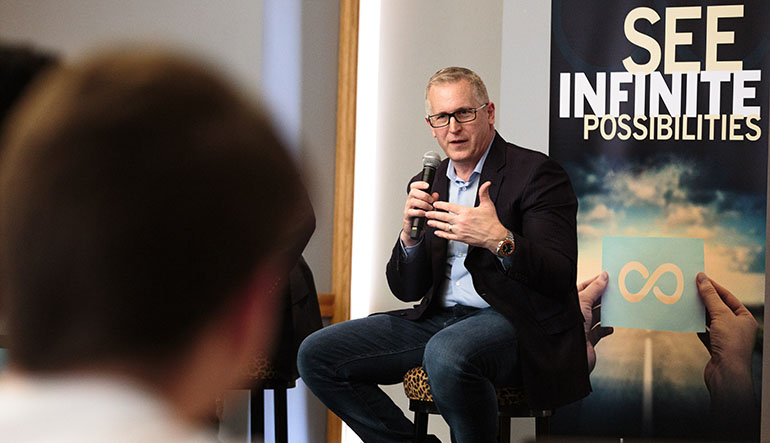 Why Innovation Is Crucial

There is a practice of innovation. Wagner has an innovation SWAT team of sorts that others at the company can engage. That team takes an agile approach to solving problems, making mistakes quickly and moving forward rapidly. It’s a great way to seek answers, test ideas, and push boundaries. Of the nearly 4,000 employees at LogMeln, 1,100 of them are software engineers. The team has goals and freedom to be in the lab, hack, and build a product. Members work on their code 50 percent of the time, teammates’ codes 25 percent, and have 25 percent free to pursue innovative ideas.

Why Have a Rotating Desk

Wagner doesn’t have a typical office. He moves his desk every three months. It could be on the sales floor, customer-care floor, or marketing floor. It allows him the chance to engage people, be inspired by employees, and listen and learn. It often takes a week before employees get comfortable and act like themselves. Once the barriers are down, Wagner can create impact by reinforcing and clarifying company objectives and themes, and seeing and hearing how things truly work.

Why He Wants to Redefine Stereotypes

He had gotten by in high school by being smart enough, but college moved at a different speed. By his junior year at Lafayette, he’d sit in the back of the class with sweats on and his hat turned backward. He liked being dismissed as a jock, only to defy that misconception by answering all the hard questions. Wagner likes to fight stereotypes even as he recognizes he is one as a white male CEO. It’s one of the reasons he uses his position to advocate for change in access to education.

It’s not a GPA or the name on a degree. Wagner looks for leaders. That doesn’t mean student government or a position in a club or organization. It can mean taking a calculated risk and doing something differently. He seeks intellectual curiosity—candidates with the drive to keep learning and wanting to learn from people. Finally is self-awareness, a trait often less developed but crucial. Candidates should be passionate about their beliefs but hold those beliefs loosely. They have to be able to admit when they are wrong. Holding a belief too tightly prevents that. Wagner says he makes a ton of mistakes, but you learn from them and don’t make them again. 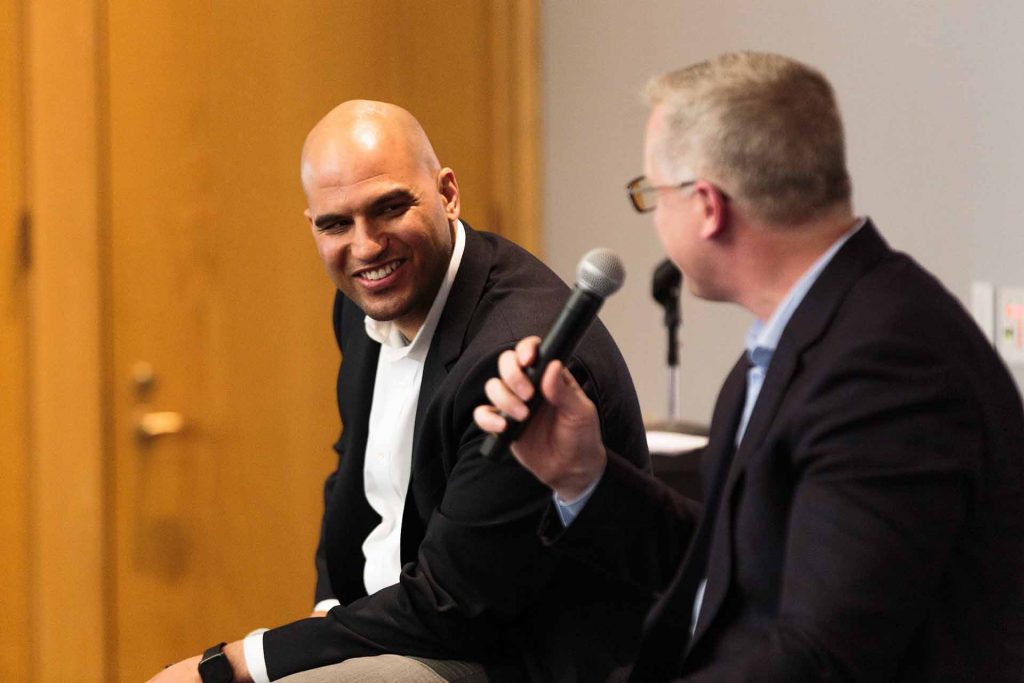 His leaders grade themselves on what they did and how they did it. Feedback comes from their peers and direct reports. It’s a telling exercise, and the company puts a lot of effort into it. It also puts resources toward training first-level managers because doing the work well is different from leading others in that work. Accountability is something many employees want—let me make a decision, but the price is accountability. That means owning up to a problem and doing something extra when no one is looking. Great leaders also seek out new experiences. Wagner does this by sitting on the boards of different companies; it helps him see how leaders tackle problems differently and provides access to peers across different industries. Reading lots can also help leaders. Wagner is often balancing three books at once—history, business, and fiction.

Wagner humbly acknowledges that others at the College might have better advice for seniors, but he threw in a few ideas. Take advantage of the one-on-one engagement with faculty. Don’t be a job jumper or change jobs for the money—it is never the most important reason to make a leave. Stick with it by showing your determination.