"As long as we take action, we preserve a better future.” Twitter

The professor of atmospheric science at Penn State University and director of the Penn State Earth System Science Center was invited to deliver the Jones Visiting Lecture by the president’s office and the environmental science and studies programs.

In his talk, “Urgency and Agency: As Climate Threat Mounts, a Call for Public Engagement and Action,” Mann discussed the indisputable evidence that climate change is real, the social and political challenges he has faced as a climate scientist, and why there is an urgent need for people to be actively engaged in demanding climate action.

“The challenge we now face is the sense that we are beyond the point of no return … that it’s too late to act,” Mann said. “That is simply not true. We can still avert the catastrophic impacts of climate change. But we have to act immediately.”

“We are now moving to a more meaningful conversation about what to do about climate change,” he said. “All parties are coming to the table. How to deal with climate change is a very worthy political debate, and it appears to be the debate we are now having.”

Scientists have warned about the great impacts the planet will suffer should the climate warming exceed 2 degrees Celsius. Recent scientific research indicates it is unlikely we can avoid that rise. That can be very discouraging and leave people with a doom-and-gloom mentality, which Mann wants to counter. 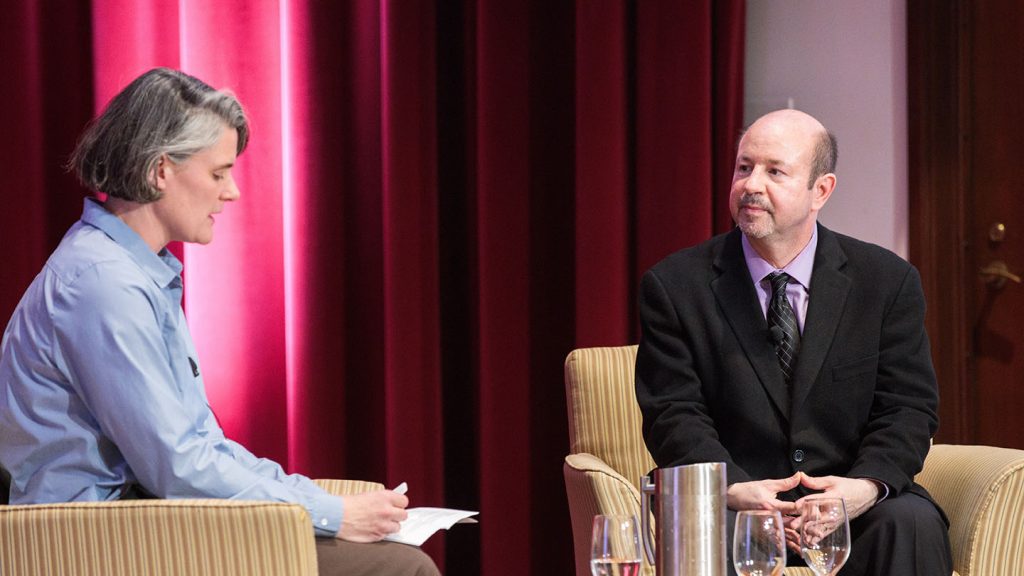 Kira Lawrence, John H. Markle Professor and chair of the College’s Department of Geology and Environmental Geosciences, conducted a Q&A with Mann following his presentation and concluded the event with a closing call to action: “It is time to be participants and not spectators in addressing the climate crisis. It’s time to lead, not watch,” she said.

Mann encouraged students to get involved, citing examples of how effective college campuses and young people in general can be when they galvanize and hold “the adults accountable.”

“We won’t tackle climate change without the advocacy of students,” he said.

How can you be an advocate and spur change? Here are three takeaways from Mann’s talk.

Vote—and encourage others to do so. “We need our policies to shift away from fossil fuels. We need to elect politicians who represent our interests and not the special interests. Talk with your friends and family members about the importance of voting. You can bring along the people in your world, educating the family members who are contrarians and getting your friends to vote. It does make a difference. We have to get past the cynicism. If we decide to sit out and not participate in the political process, it’s the surest way we won’t tackle the climate problem—or any problem.”

Counter skeptics. “It’s important to understand where the skepticism is coming from. Is it from a lack of knowledge? That’s an easy fix. There are all sorts of places we can point people to. Skepticalscience.com debunks climate change myths at beginner, intermediate, advanced levels. You can use that information to steer conversations to the science. But often skepticism isn’t coming from genuine doubt or lack of information. If it’s about being a faithful conservative, you can reframe the issue. If the skeptic is a veteran, you could reframe it in terms of national security. You could frame it in terms of economics; how extreme weather impacts our communities. There is economic opportunity in renewable energy.”

Be engaged. “It’s all about trying different things and moving the ball forward. We all have unique skills and talents and personality traits that can allow us to be effective in different ways. You can be an activist and raise awareness. You can make important contributions via your research. So many college students today are doing research related to renewable energy. You can make life choices, going into fields where you can be a direct part of the solution. There are so many ways to change the world. You can speak through your actions.”

Mann is a world-renowned climate scientist who has focused his scientific career on the improvement of methodologies for finding patterns in high-resolution paleoclimate reconstructions. Essentially, he uses statistical data of past climate change to advance the understanding of modern-day climate change. He has received numerous honors and awards for his work; most recently he was awarded the Tyler Prize for Environmental Achievement (2019), Award for Public Engagement with Science from the American Association for the Advancement of Science (2018), and Climate Communication Prize from the American Geophysical Union (2018). Mann is the author of more than 200 peer-reviewed and edited publications, numerous op-eds, and four books. He is also co-founder of the award-winning science website RealClimate.org.

About Sustainability at Lafayette

Mann’s talk demonstrates the College’s commitment to environmental stewardship and promoting an ethos of sustainability on campus and in the community. In February, the Board of Trustees unanimously voted to approve a Climate Action Plan, which charts the path for the College to achieve carbon neutrality by 2035.

About the Jones Lecture

The Thomas Roy and Lura Forrest Jones Visiting Lecture Series was founded by Trustee Emeritus Thomas Roy Jones in 1973 to provide Lafayette students with the opportunity to hear presentations and interact each year with individuals of exemplary accomplishment in the academic world or in public life.