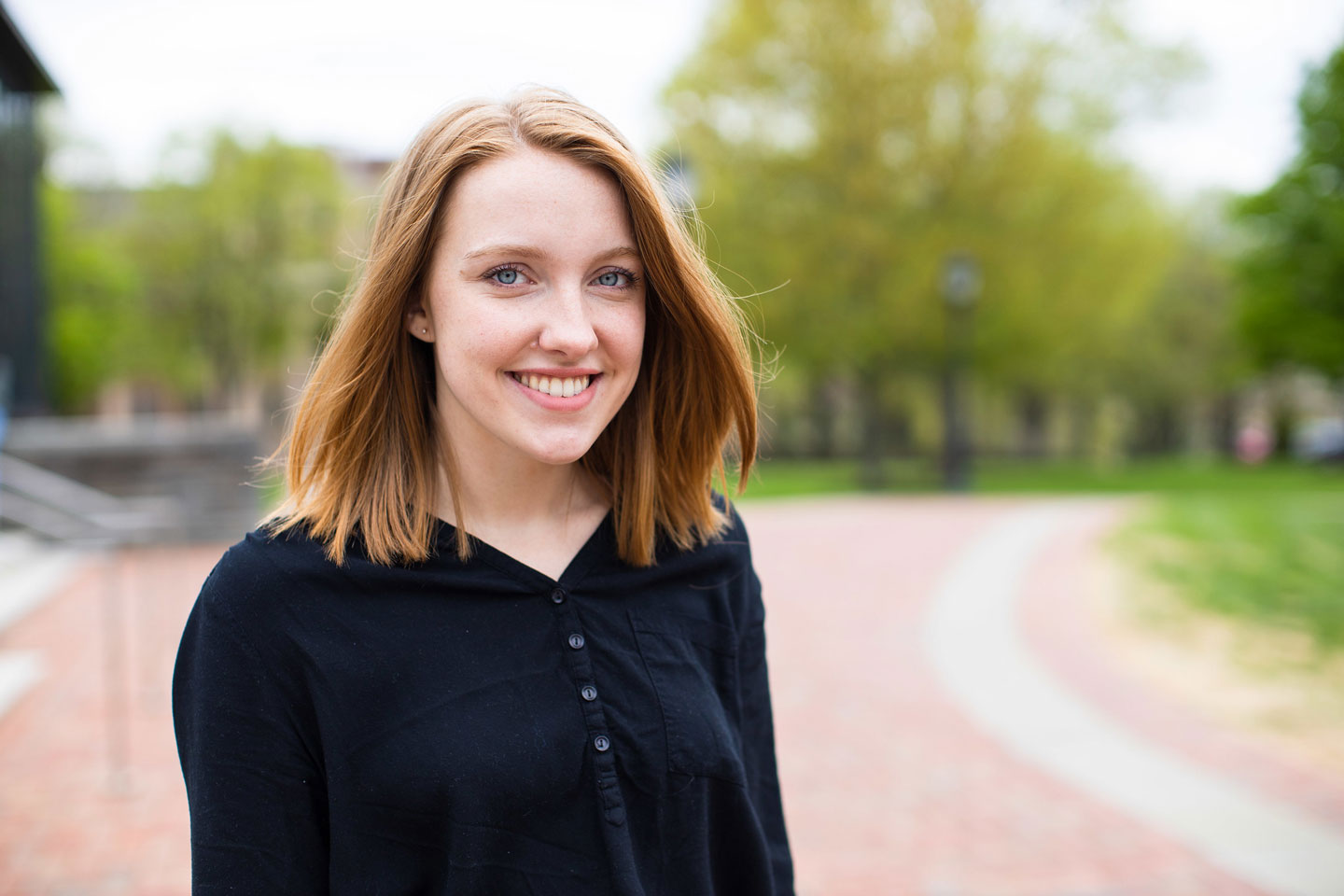 Jacquelyn Cobb ’19 is headed to India after graduation to teach English under a Fulbright-Nehru English Teaching Assistant grant.

Cobb will be teaching at the same all-girls school in Kolkata, India where Elizabeth Lucy ’15 spent the  past year as a 2018 Fulbright scholar. The women recently met for the first time on campus to download about the 9-month assignment.

Cobb, a biology and English double major with a minor in bioengineering, is excited to experience a new culture, not as a tourist but as a denizen entrenched in day-to-day life.

Her love for exploring new countries developed during a six-week interim trip to Italy in summer 2017 and continued the following spring during a semester in Edinburgh, Scotland. These experiences motivated her to apply to the Fulbright Program as an English teaching assistant. 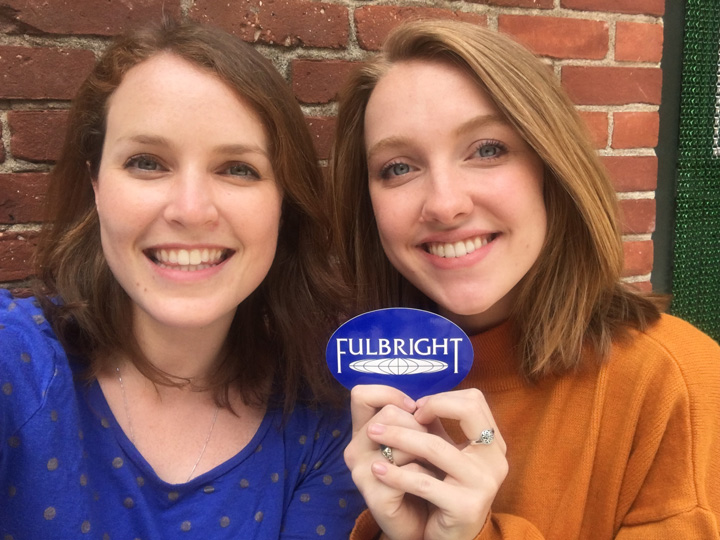 Elizabeth Lucy ’15 and Jacqueline Cobb ’19 share a Fulbright moment. Cobb is headed to India to teach at the same all-girls school where Lucy spent the past year as a 2018 Fulbright scholar.

“This time I wanted to give back to the community I was living in as opposed to living off of it,” says Cobb, who believes her Fulbright application got a boost from her involvement with Lafayette’s International Students Association. She lived with a student from Bulgaria her first year and later served as a peer adviser and public relations coordinator for the organization.

Cobb also credits Julia Goldberg, associate dean of advising and co-curricular programs and fellowships, with helping her craft a winning application. “I wrote my first draft during the summer and submitted my application sometime in October,” she says. “Dean Goldberg spent hours and hours working with me on the essays. I had to talk about why I should be hired (as an English teacher) and why I wanted to be part of the program.”

This will not be Cobb’s first time teaching English as a Second Language. During her sophomore year, Cobb’s assignment as a College writing associate was to teach ESL students English and help adults studying for their GED at ProJeCt of Easton, a nonprofit in the city’s West Ward neighborhood. She enjoyed the work so much she returned as a volunteer the following semester.

“With the ESL students, it was mainly conversational practice. I literally sat and chatted with them, which sounds like nothing, but it was actually pretty difficult given both of our limited vocabulary with each other’s language,” she says. “So I had a very direct experience with what the India program was looking for.”

Cobb plans to learn Hindi while in India, for both personal and professional reasons. Her boyfriend, also a senior at Lafayette, is from Pakistan and speaks Urdu, a close relation to Hindi. “I’m excited to speak to my boyfriend in his own language,” she jokes. 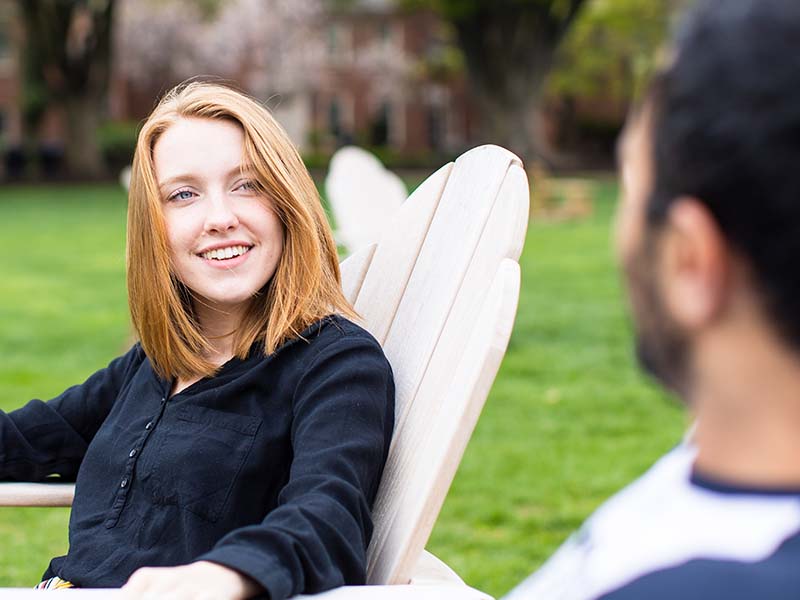 In terms of a career, she plans to pursue a Ph.D. that focuses on the neuroscience and psychology of language. She points to Lera Boroditsky, a cognitive scientist and professor at University of California, San Diego, as someone conducting cutting-edge research in the field. Cobb came across Boroditsky’s TED Talk, titled “How Language Shapes the Way We Think,”  while scrolling through Facebook and has since watched the video so many times she can nearly recite verbatim the part about how an aboriginal tribe in Australia uses cardinal directions (north, south, east, and west) to navigate the world as opposed to “right” and “left.”

When she first came to Lafayette, Cobb believed English and biology represented gateways to separate careers, but since they were her favorite subjects in high school, she decided to major in both. The mechanics of these shared interests represent the way she sees the world.

“I love English literature, but I really love grammar,” she says. “But more so, I’m drawn to how things work and breaking bigger things down into smaller things.”

At one point, she decided a job in medical writing would be a good blend of her interests, but an internship raised some flags. “I wrote research papers for scientists, but I got frustrated because I wanted to do the science,” she says.

Cobb also conducted independent research on kidney cancer under the supervision of Khadijah Mitchell, assistant professor of biology. It was an amazing experience, she says, and she is excited to apply what she learned from Mitchell to her chosen field.

“My dream is to research the neuroscience of language,” she says, and the Fulbright is a first step. She believes it will allow her not only authentic access to a new culture, but also a front seat to the way people use and interact through language. 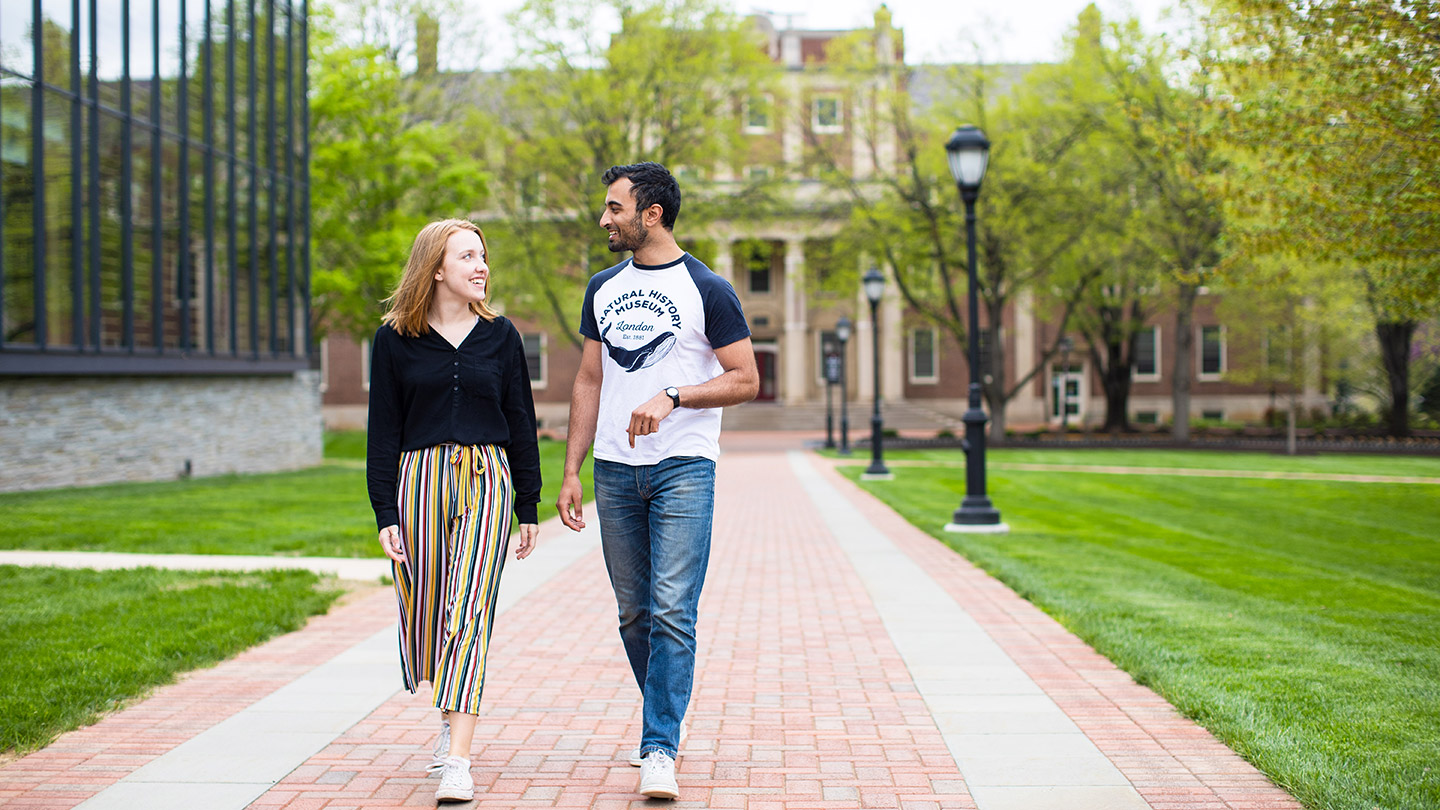 “Living abroad is very important to me,” she says. “I love doing research, and I’m excited about learning Hindi. I think this experience will make me a greater asset to the psycholinguistics field.”

Evelyn Adams ‘19: Awarded Teaching Assistant Program in France (TAPIF) grant to teach English in France (TAPIF is a program through the Cultural Services French Embassy in the U.S. and Canada)