A final project in a senior seminar for policy studies majors.

Can’t you just picture the stacks of 100-page papers?

Luckily, such a tedious and cumbersome approach for a capstone project is not Mark Crain’s style.

The William E. Simon Professor of Political Economy and chair of policy studies is sitting at a worktable in the offices of PBS39. Students from his class will be working for the next 12 hours on completing storyboards, pulling soundbites, narrating over b-roll, and editing video.

Caroline Shaffer ’19 has walked into a black corrugated cube—a sound booth filled with a table, chairs, tabletop microphones, and miles of purple cable.

She has entered the studio with nearly 40 minutes of footage. Her first edit trimmed it down to three minutes. She has to shave off another 60 seconds. 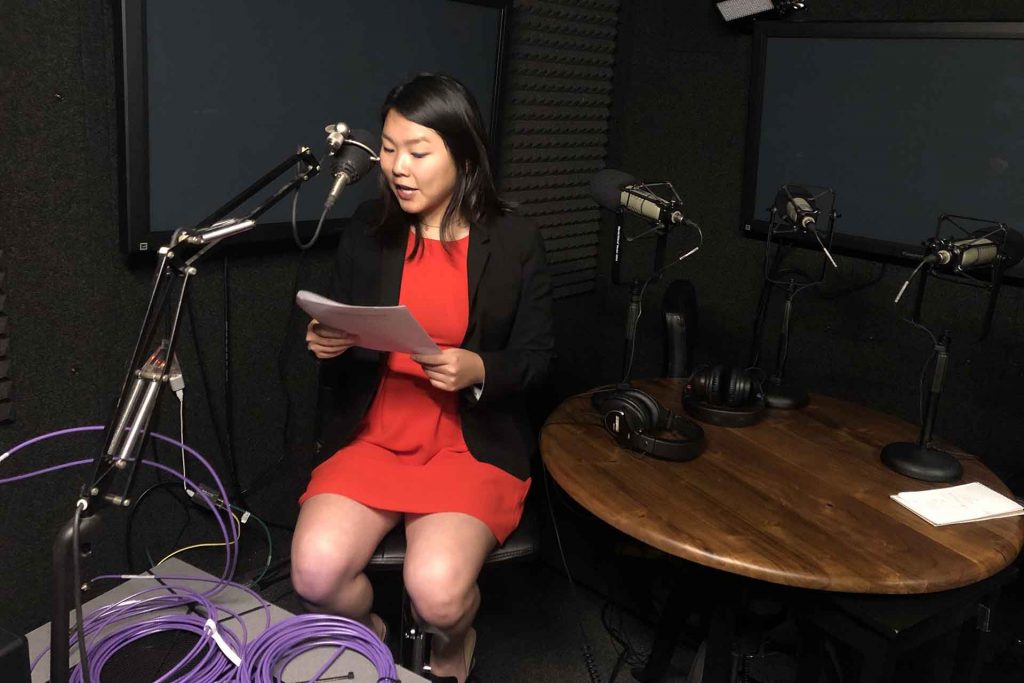 This is when it gets tough … what to keep and what to leave on the editing room floor.

She has her script that she begins to narrate, flubbing it toward the end. She laughs off the error and reads it again.

Her video essay takes the “man on the street” approach as she asks people their opinions on a topic.

This year students are exploring the labor market imbalance in the Lehigh Valley. Projections indicate there will be 25,000 jobs to be filled over the next five years and a massive shortage of skilled workers.

“Welders, plumbers, electricians, CDL drivers, and nurses will be in great demand,” says Crain. “But many young people today aren’t considering those careers despite the open apprenticeships, good pay, and low college debt.”

That’s what students had to figure out.

Tim Fallon, CEO at PBS39, has been working with the professors for seven years, including live two-hour coverage of the 2016 national elections that was nominated for a regional Emmy award.

“This speaks to the quality of the students and the material they create,” says Fallon. “The key words in our mission are inspired, vibrant, and engaged, which is exactly what this partnership and product are.”

The show this year will have three blocks: illuminating the problem of the labor market imbalance, factors behind it, and potential solutions.

A video essay by Jane Gold ’19 is in the first section. She is talking about “jobs in search of people.” Narrowing it all down to a concise two minutes is daunting.

“We started with general research in order to get a basic understanding,” she says. “We then followed it up with detailed research on economic reports and data trends, like current population and growth projections. But the hardest part has been the countless emails in order to secure expert interviews.”

She talked with a leader at Lehigh Valley Health Network because health care is the number one field where the labor shortage will be most acute.

“Forty-two percent of the demand for new jobs will occur in five industries,” she says. “Our class has talked through our segments so much in order to create a solid 30-minute program. PBS has been a fantastic partner. They provide the expertise that I don’t have time to learn. I have a better understanding of the talent, work, and people necessary for a successful broadcast.”

That is the value for Crain.

“I want the project and show to live at an intersection of business, policy, and technology where we study important global issues,” he says. “The challenge is to cover a topic with the depth it deserves and communicate it to a well-educated population … in 12 90-second video essays.”

Shaffer knows it isn’t easy. Yes, she has cut her footage down and is working on a final edit. That’s when the computer in front of her flickers and freezes. The editor working with her reboots and sees half of the project has to be rebuilt.

“These are skills that will give the students a competitive advantage as they enter the workforce,” says Crain. “Communicating a complex topic through the visual media can add value to almost any organization.”