Despite the growing number of programs that encourage young women to pursue STEM-related fields (science, technology, engineering, mathematics), scientific literature shows there is still a gender gap, particularly in engineering and computer science.

For example, in 1984, 37% of computer science majors were women, but that number dropped by 18% by 2014, according to research from Accenture and Girls Who Code. Computing continues to be one of the country’s fastest-growing industries, but if the current trend is not disrupted, most of those jobs will be pursued and filled by men.

Computer science major Shira Wein ’19 is well aware of these numbers. They don’t discourage her. Instead, they have inspired her to take action. 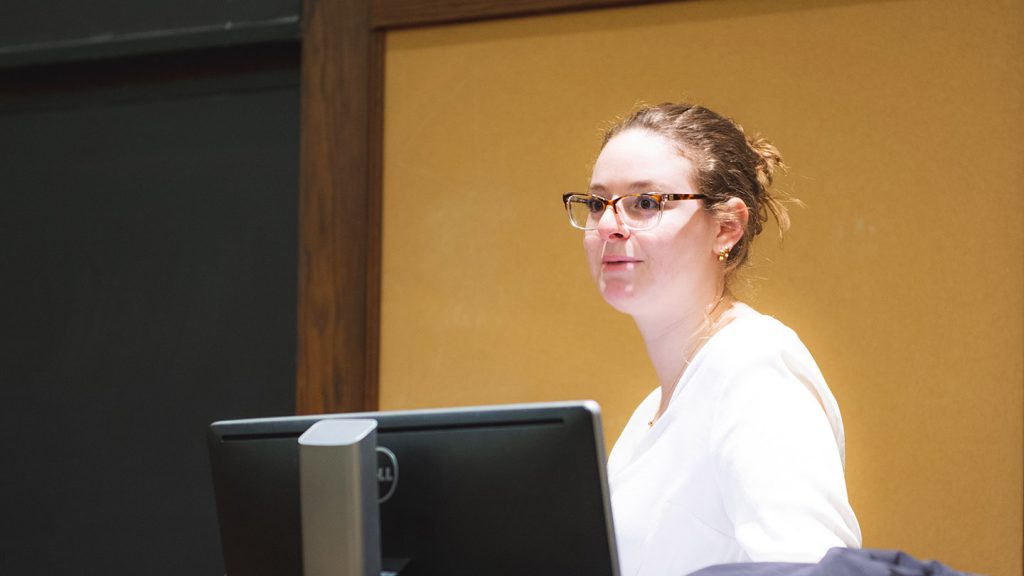 Shira Wein ’19, president of Women in Computing, played a major role in organizing the College’s first Women in STEM Week in April.

Wein has taken a leadership role on campus, working to increase awareness and provide support for those who are underrepresented in STEM fields.

In 2017, Wein became president of the student group Women in Computing (WinC). Earlier this year, she led members to organize a week of programs to celebrate the visit of Margot Lee Shetterly, author of Hidden Figures, to campus. And in April, she played a central role in organizing the College’s very first Women in STEM Week.

“At the beginning of the academic year, I started talking with members of WinC and our faculty adviser, Joann Ordille [assistant professor of computer science], about how we could bring people across campus together to talk about women in STEM,” Wein says. “I wanted to do something that would reach all disciplines and include all genders, so we could learn together, talk together, and support each other.”

Wein collaborated with her peers in Women in Computing as well as the student-run Math Club and Society of Women in Engineering. She also reached out to the faculty group Women in the Sciences. The result was a cohesive, cross-disciplinary itinerary to help encourage awareness and conversations about the gender gap in STEM.

The schedule of events included:

“Shira was the driving force in putting together Women in STEM week,” Ordille says. “Her leadership has been an incredible asset to the computer science department and to women in STEM-related fields on campus. Her efforts expanded Women in Computing to include an outward focus that is having impact across campus and amongst alumni.”

Wein, who will begin to pursue her Ph.D. in computer science at Georgetown in the fall, plans to become a professor. “I am excited to see how much interest there is on campus in discussing representation and diversity in STEM, as demonstrated by the significant and varied attendance at the Women in STEM Week events,” Wein says. “My hope is that Women in STEM Week and similar events can continue to increase awareness and unity across STEM fields at Lafayette.”

Learn more below about two of the events of Women in STEM Week.

Take It from Us