Steven Swidler remembers visiting the cafeteria at Oberlin College when he was on a campus visit in high school.

He took three paper napkins from a dispenser and sat with a student who pulled a cloth napkin from her backpack.

“I said, ‘Oh, you bring your own?’ She replied that she didn’t want to use paper because it was a waste of resources.”

Even before he had formal training as an economist, Swidler began processing the logic and  pros and cons of approaching sustainable decisions that may or may not make economic sense.

“Let’s think about this,” he says. “I’ve used paper napkins made from trees that grow every 50 years and can be harvested. The alternative is that she had to wash a cloth napkin every so often, using power, water, and soap. It’s not clear to me that I wasn’t friendlier to the environment than she was. You need honest accounting. It wasn’t a slam dunk.”

Scenarios that unite economics and sustainability are ubiquitous. For Swidler, Walter E. Hanson/KPMG professor of business and finance, they provide the grist for his research and inspired a new 200-level class this semester, Sustainable Finance, with a syllabus outlining a rich array of philosophical and practical areas for discussion.

“Sustainability is a forward-looking concept, a recognition that actions today have consequence tomorrow,” he says. “And finance is a natural discipline to talk about that because everything that we do as trained financial economists is to worry about what’s happening in the future. The idea of time going forward and bringing it back today—that’s the bread and butter of what finance is all about.”

In the class, Swidler and his students have been talking about altruism—whether people are actually concerned about one another or just taking an action in expectation of getting something in return.

“There can be a transactional notion about what appears to be goodness and kindheartedness, but it is nothing more than a quid pro quo kind of thing,” he says. “Being aware of this, I’ve always found any analysis a little bit short of what it needs to be if you don’t ask why or what’s the purpose.”

Social programs, for example, have historically pitted one generation against another, even as the older generation will profess its care for its children. With a nation facing a $22 trillion debt, one generation is living well in the present while postponing the fact that someone is going to have to pay for that comfort down the road.

“They can figure out how to kick the can down the road a little farther,” Swidler says. 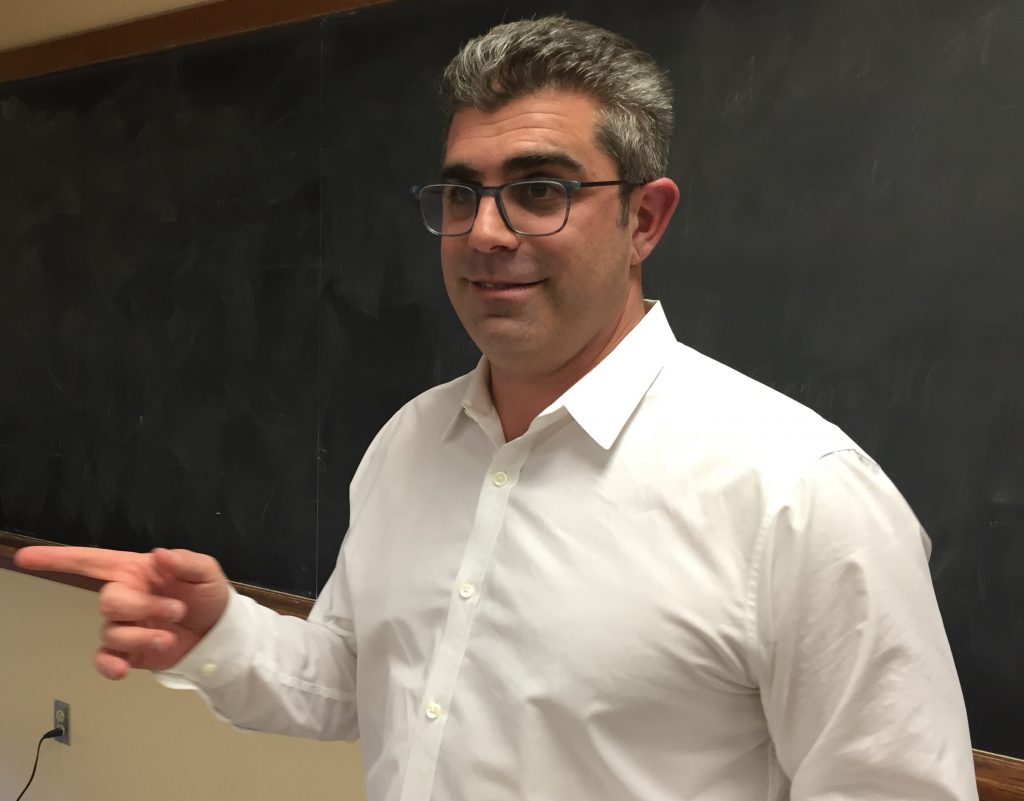 From philosophy and circumspection, the class has moved into how to measure risk. Classroom discussions have been punctuated by talks by alumni, including Nick Ernst ’98, a trader of weather risk who works with industries that rely on the weather to smooth out the risk they encounter, and Kristen Rowe ’06, a sustainability consultant. Dave Hopkins, Easton’s public works director, discussed the financial challenges of managing a municipal recycling program.

A self-described weather bookie, Ernst writes weather derivative contracts to help companies hedge against climate-related losses. He talked to Swidler’s class in detail about how weather can affect profits and losses. Anheuser-Busch wants to know about summer temperatures to gauge beer consumption in regions of the country where it has the most concentration of sales; ski resorts want to know about potential snowfall; a fireworks company might request a weather forecast for July 2-8, because a drought could prevent the launch of July 4 fireworks.

Hopkins discussed how municipal recycling, while seemingly a sound, commonsense environmental program that would pay for itself, actually costs Easton money to implement.

“I have a background in studying sustainability, but it’s very interesting to see it from an economics perspective,” she says. “I was taken aback by people making money and betting on climate change. Ethically, that’s a little concerning. But I would like to see more courses like this that look at sustainability through different lenses.”

“Given that sustainability is one of Lafayette College’s core values, I think it is important that courses and perspectives continue to be rooted with the same ethic,” Mathisen adds.

Swidler allows that the course may seem a little bit different, especially for students who are studying sustainability.

“It’s not at odds with anything that they’ve learned,” he says. “It’s just a slightly different perspective on sustainability. It’s more than just preserving the environment.”