Trustees James Fisher ’77, Elizabeth Hughes MacDonald ’81, Donald Morel ’79, and S. Kent Rockwell ’66, who are retiring from the board, will be elected to emeritus status. The following are biographies prepared for the Commencement program. 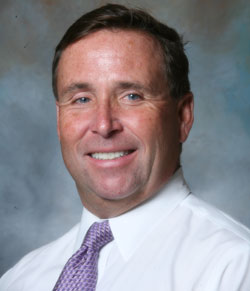 Fisher was vice chair of the Steering Committee and member of the Executive Committee for the Live Connected, Lead Change campaign, the largest and most ambitious fundraising effort in the College’s history, which concluded in December having raised $425 million. He is chair of the Marquis Society and former vice chair of the Lafayette Leadership Council.

Fisher Stadium is named in honor of Fisher and his wife, Tracey Sanders Fisher, as are student residences Fisher Hall East and Fisher Hall West. The Fishers endowed the James J. and Frances D. Fisher Scholarship fund, honoring Jim’s parents, and the James R. ’77 and Tracey Fisher Athletics Enhancement Endowment. Jim and Tracey were inducted into the Société d’Honneur in 2003. They are the parents of Lafayette graduates Lauren ’07, James Jr. ’10, and Margaret ’11. 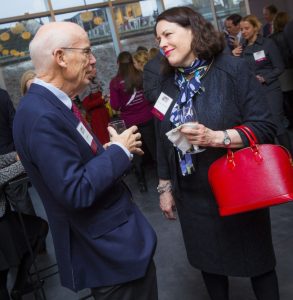 MacDonald was vice chair of the Presidential Search Committee whose efforts culminated in the election of Alison R. Byerly as Lafayette’s 17th president. She also was a member of the search committee that identified Daniel H. Weiss as 16th president.

MacDonald was a member of the Steering Committee for the Live Connected, Lead Change campaign, the largest and most ambitious fundraising effort in the College’s history, which concluded in December having raised $425 million. She was chair of the Marquis Society and a member of the Council of Lafayette Women, Committee on the 40th Anniversary of Coeducation, and Athletics Review Steering Committee. She comes from a proud Lafayette family that includes Edward J. Hughes ’25, Edward B. Hughes ’52, Edward Z. Hughes ’83, and Ellen H. Mushlitz ’85.

An economics and business major at Lafayette, MacDonald holds a Master of Business Administration degree from Kellogg School of Management, Northwestern University. She enjoyed a lengthy career in banking, principally at JP Morgan Chase and its predecessor organizations. She served in many capacities including roles in corporate client-relationship management, debt capital markets, marketing and communications, and human resources management. In her ultimate role, MacDonald served as chief staff administrator to the vice chairman of the Investment Banking Division. MacDonald was a divisional representative on CEO-level initiatives, many focused on diversity and building leadership capabilities across the firm.

MacDonald has played leadership roles on the boards of many nonprofit organizations, including Impact 100 Garden State and Homeless Solutions. 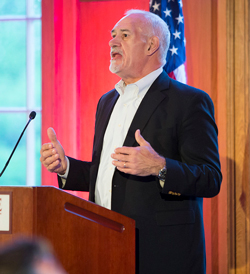 DONALD E. MOREL, member of the Class of 1979, has been a trustee since 2009. He is chair of the Committee on Grounds and Buildings and a member of the Executive Committee. He has served on the board’s committees on Information Technology and Student Life and on the Lafayette Leadership Council.

Morel Field House is named in honor of Morel and his wife, Lauren Morel. Their support made possible the first projects undertaken by the Bradbury Dyer III ’64 Center for Innovation and Entrepreneurship, then called IDEAL Center. The Morels were inducted into the Société d’Honneur in 2013.

A metallurgical engineering major at Lafayette, Morel holds a Master of Science in Materials Science degree and Doctor of Philosophy degree, in materials science and veterinary medicine, from Cornell University. He is a graduate of the Executive Program at Darden School of Business, University of Virginia.

Morel retired as chairman and CEO of West Pharmaceutical Services, designer and manufacturer of pharmaceutical packaging and delivery systems, in 2015. He joined the company in 1992.

He is author or co-author of more than 30 publications dealing with metal matrix composites, space environment effects on materials, polymer mechanical behavior, and electron microscopy of organic materials. Morel’s research has been supported by the National Science Foundation, NASA, Office of Naval Research, DARPA, and private industry. He was a finalist for assignment as a NASA Mission Specialist in the Astronaut Office and has served on several NASA scientific advisory committees.

He is the recipient of Lafayette’s George Washington Kidd 1836 Award for career achievement and was named a distinguished alumnus of Cornell’s College of Engineering.

A fellow of the American Institute for Medical and Biological Engineering, Morel is chair of the boards of the Franklin Institute and American Oncologic Hospital of Fox Chase Cancer Center. He is a director of Catalent Inc. and Integra LifeSciences and former director of Kensey Nash Corporation. He is vice chair of the Travis Manion Foundation, supporting veterans in transition and families of the fallen. 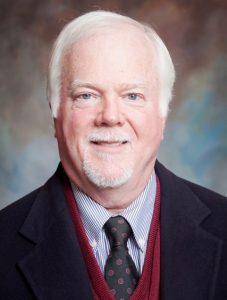 Rockwell Integrated Sciences Center is named in his honor. The largest capital project in Lafayette’s history, it will open this fall, new home for the departments of biology and computer science and interdisciplinary programs in environmental science and environmental studies. It will provide additional space for the neuroscience program and will house the Bradbury Dyer III ’64 Center for Innovation and Entrepreneurship and Daniel and Heidi Hanson ’91 Center for Inclusive STEM Education.

Among many other examples of support of Lafayette, Rockwell established the S. Kent Rockwell ’66 Scholarship Fund. He was inducted in the Société d’Honneur in 2017.

An economics and business major at Lafayette, Rockwell attended the University of Pennsylvania’s Wharton School. He has been chairman and chief executive officer of Rockwell Venture Capital since 1983, operating and investing in many businesses. He has created more than 30 companies, with a total of more than 3,000 employees, including Rockwell Forest Products, Strata Products Worldwide, Appalachian Timber Services, Strata Proximity Systems, and ProGrass LLC.