When Saeed Malami ’20 took home the championship at this year’s Interstate Oratorical Association (IOA) tournament, it was the perfect ending to the Lafayette forensics team’s groundbreaking season.

The IOA tournament, which has been held every year since 1874, is the nation’s oldest competitive forensics event in persuasive speaking. The team, however, had a successful season even prior to the IOA competition.

For the first time since 2008, the speech and debate team won the Pennsylvania Forensic Association (PFA) tournament, the state championship for forensics. According to Scott Placke, director of forensics activities, Lafayette had five champions at PFA. The tournament, hosted at Lafayette this year, was the “qualification moment” for the IOA tournament, according to Placke.

For the IOA championship, which is only for students in the persuasion speech event, the top two speakers in persuasion from the PFA are selected to represent the state. These speakers were Malami and Lia Charles ’22.

The forensics team went to four national competitions this year: Novice Nationals, National Speech Championship, National Forensics Association (NFA), and the IOA tournaments. Charles attended Novice Nationals, open to students in their first year of intercollegiate forensics competition. The National Speech Championship, which occurred over spring break, is a smaller competition where each school can send two entries per event. At this competition, Malami came in fourth place, ranking him among the top 24 speakers in the country.

At the NFA championship, held in Santa Ana, Calif., April 18-22, both Malami and Luisa Gunn ’21 went to the quarterfinals for their events. Gunn debates Lincoln-Douglas style for the forensics team but also does limited-preparation speech events in which speakers are given a limited amount of time to prepare and give a speech.

Gunn’s break to quarterfinals at the NFA makes her one of the top eight debaters in the nation, according to Placke. Prior to Lafayette, Gunn had no competitive debate experience.

“That’s a big deal. That means she can argue with you better than almost anyone else,” Placke says. “It’s a remarkable achievement what she did.”

The IOA tournament was held April 27-28 at West Chester University in West Chester, Pa. Although Charles did not break through the preliminary rounds, Malami advanced to finals. Charles’ speech was about using restorative justice to address sexual assault. 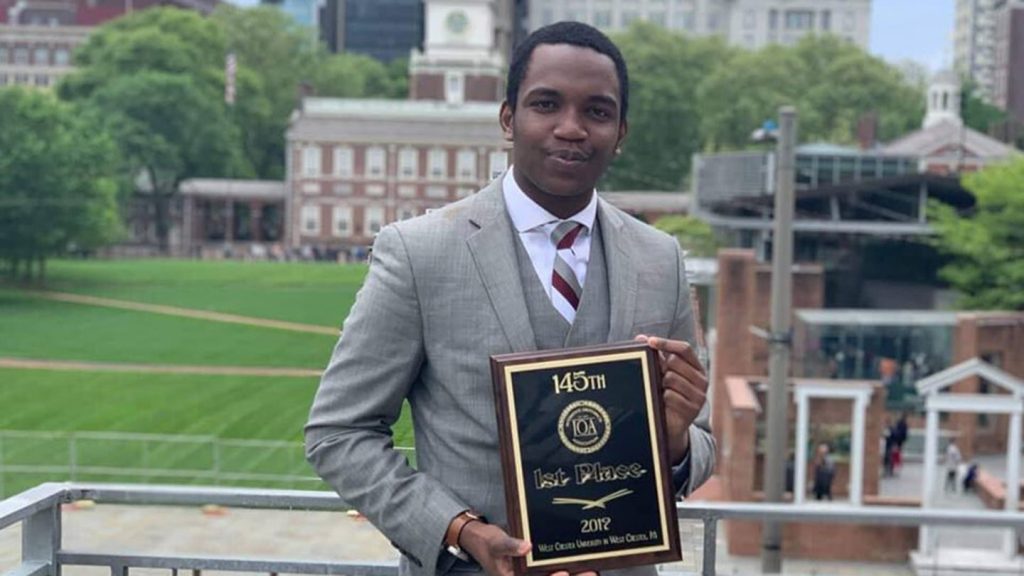 According to Malami, after starting to work on the speech with Placke, the two realized the problem is in the supply chain complexity that ultimately allows big chocolate companies to “get away” with that kind of “inhumanity.”

“We decided to get closer and suggest that people try and change their eating habits the same way you go vegan because you don’t like what the meat industry is doing,” Malami says.

“It was at that moment that I felt like the speech blew wide open,” Placke says. “We were able to explain the problem.”

Leading up to the NFA competition, Malami put his heart into practicing and bettering his speech.

“I really just wanted to knock it out,” he says.

While his speech made it to quarterfinals at the NFA tournament, Malami had hoped the speech would make it to at least semifinals. Leading up to the IOA, he had a more laid-back approach.

“It had become second nature for me,” he says. “I just woke up that day and performed it.”

“It was really cool to see the people in the room understand how important it was to switch away from the big chocolate companies,” he says. “It felt really good to have that impact.”

Malami didn’t know what to expect when it came time for the winner to be announced. When it was announced he had come in first place, he immediately turned to look at Placke, who was crying.

Placke says that the energy Malami’s speech brought to the room was what set him apart.

“It is truly a national championship … It is one of the biggest moments that I’ve been a part of,” says Placke, who has been at Lafayette since fall 2000.