The goal: Identify light-sensitive molecules, which would support functioning photoreceptors in crayfish.

Why? Vertebrate animals, including humans, have a light-sensitive protein called melanopsin in their eyes. Melanopsin plays an important role in the body’s circadian rhythm in that it detects changing levels of light and notifies the brain to be alert. Crayfish aren’t vertebrates—they are crustaceans. Yet they have a photopigment in the caudal photoreceptor that appears to behave similarly to melanopsin and impacts the animal’s behavior; it might be why crayfish swim backward. Adusei and Dearworth have been working together for two years to detect and better understand this receptor.

Anatomical oddity: The caudal photoreceptor Adusei targeted is located in the crayfish’s tail—not eyes, as one might expect. 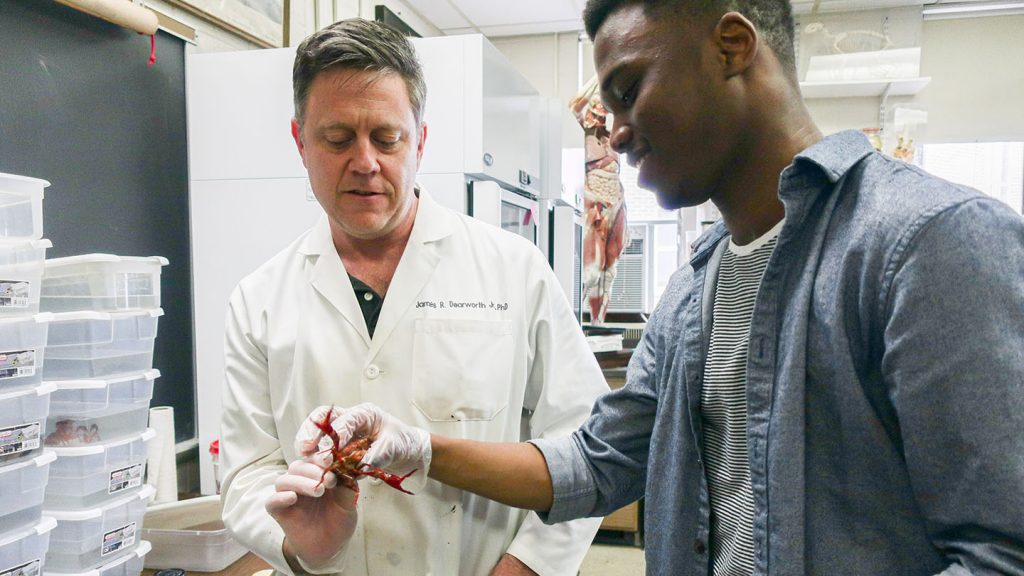 Challenge accepted: Adusei initiated the project, reaching out to Dearworth during his sophomore year while investigating opportunities to do independent study. “It was my first time working with crayfish,” Adusei says. “I needed to remove the receptor from the tail, and the receptor is very tiny—it’s like a small dot—so it was challenging and a little scary at first. But once I got comfortable, it went very smoothly.”

Extra help: Analyzing the retinal required assistance from the chemistry department. Michael Chejlava, instrument specialist, helped Adusei use a liquid chromatography mass spectrometer to detect light-sensitive molecules such as retinal by measure of the compound’s atomic mass. “The spectrometer enables us to measure exact amounts in a very specific, sensitive way to determine for sure that the retinal is there. It also enables you to measure very small quantities, which is important,” Adusei says.

The NCUR experience: “I learned that you have to be able to break down the research and explain it to people who don’t have a background in your discipline. There was a wide range of people there asking questions. When you have to explain your research to people, it makes you a better scientist.”

Student’s take: “Professor Dearworth really made me feel like a valuable contributor. He talks through things with me and takes my input into consideration.”

Prof’s take: “That’s the approach I like to take with students. I am here for the students as a resource, and I want to help them succeed. But I like them to feel that they can own the research and take initiative and become independent. Research is very challenging, and you really have to be motivated. It’s really important to be able to push yourself and ask the right questions to move the research forward. Matt wasn’t afraid to go for it. He matured over the course of our work together, and it was nice to see him be comfortable taking the lead.”

Next steps: Adusei presented his research at the Lehigh Valley Society for Neuroscience Undergraduate Conference at Muhlenberg College in late April. He and Dearworth are working on a manuscript of their research that they will submit for publication. In the fall, Adusei, who is originally from Ghana, will head to University of Rochester to complete a doctorate degree in visual neuroscience. “The research skills I have acquired while working on this project will be invaluable,” he says.