The research: Effects of Early-Life Stress on MCC and Dopamine Receptor Expression

The goal: Understanding the impact of early-life nutritional stress on the brain chemistry of zebra finches.

Why? The Tomaszycki lab uses zebra finches as a model for human behaviors, including sex differences, language learning, and how and why we form monogamous pair bonds. Zebra finches, like humans, live in large social groups, identify all of their peers through visual and vocal cues, and learn vocalizations through a long period during development, which makes them a good research model. Pero and Tomaszycki hatched up a thesis project to investigate whether early-life stress had a long-term impact on young birds.

Does it? Yes, indeed. Baby birds whose parents faced obstacles in feeding them—creating stress—could have lower levels of MCC, a brain enzyme that is important for production of glutamate, the most prevalent excitatory neurotransmitter in the brain. Additionally, two dopamine receptors (D1A and D2) also were investigated to see if they were impacted by early-life nutritional stress. Deficiencies in these have been shown to impact cognitive and motor function. MCC was decreased with age in males subjected to nutritional stress. Although an effect of nutritional stress was not observed in the expression of D1A alone, the number of cells expressing both D1A and MCC was decreased in males subjected to nutritional stress, indicating that D1A and MCC are related. 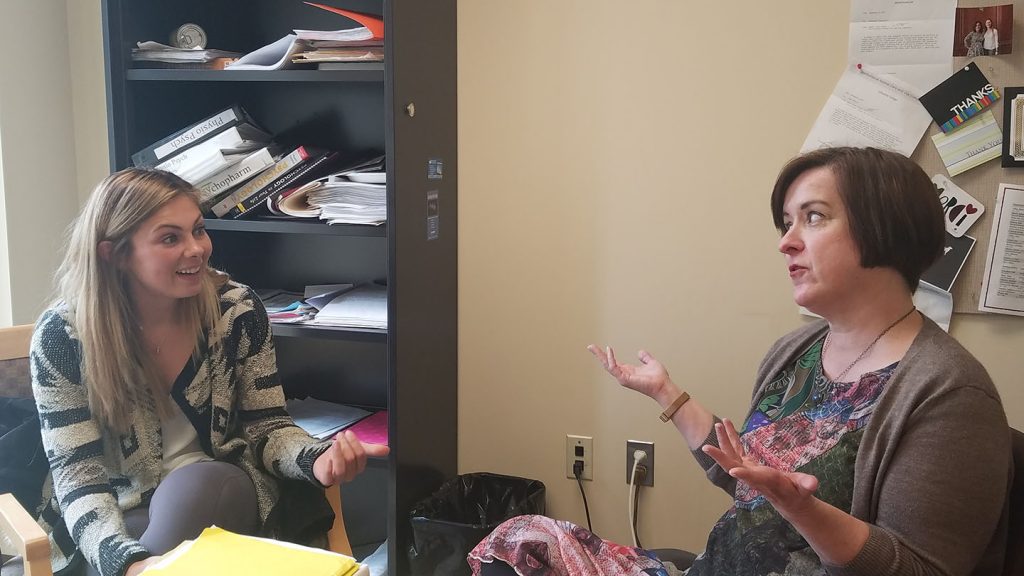 Listen up: Male birds who were nutritionally stressed had lower levels of MCC, which hurt their crooning ability. “When they sing, they lack some of the higher, sexier notes,” Pero says. That can impact their ability to attract or choose a mate. The lower-quality songs or inability to distinguish attractive songs indicates a lack of learning. Females lacked a strong song preference, but the same effects on MCC and co-expression of MCC and D1A were not observed in females, which could have impacts in the wild; being less selective about your mate could impact your offspring.

Additional lessons: “I learned how to manage a group of people and teach different procedures,” says Pero, who led a team of research assistants. “I also learned to always keep a positive attitude and keep trying different things even when something does not work out the first time.”

Prof’s take: “This was a huge undertaking on Adri’s part. I and her committee argued that she could do far less and still have an amazing, publishable thesis—but she persevered. We had to develop primers to make the probes that would allow us to examine gene expression in the brains of male and female zebra finches. It was a lot of work. We spent many long weekends in a windowless room, while others were out on campus enjoying the beautiful weather. I am grateful that I work at Lafayette because I get students like Adri who are so motivated.”

Student’s take: “I’m very fortunate to have such a great professor who has been a phenomenal mentor. I am so grateful to have learned so much from her.”

What’s next? The research is still ongoing; the Tomaszycki lab is still investigating D2, another dopamine receptor. “Adri and I will finish the project and submit the manuscript for publication this summer,” says Tomaszycki, who has another thesis student, Emily Fidlow ’19, who is conducting research on how serotonin (in the form of antidepressants) impacts birds’ relationships with their partners. After graduation, Pero will head to VA Medical Center in the Bronx, where she will spend a year doing Alzheimer’s research. She is applying to medical schools with the goal of beginning those studies in fall 2020.