Christian Combi’s first visit to Lafayette College was in utero to watch—well, maybe feel—the Leopards beat Navy 87-61 to win the Patriot League men’s basketball championship and earn a berth in the NCAA Tournament.

“It was loud. Everyone was banging on the bleachers,” recalls his mother, Cynthia ’90. “I remember thinking, ‘I hope this is OK for the baby.’”

A few years later, Christian was back on campus as a “quaddler,” the label Lafayette students bestow on the day-care toddlers who walk the Quad with their teachers, two by two, hand in hand. 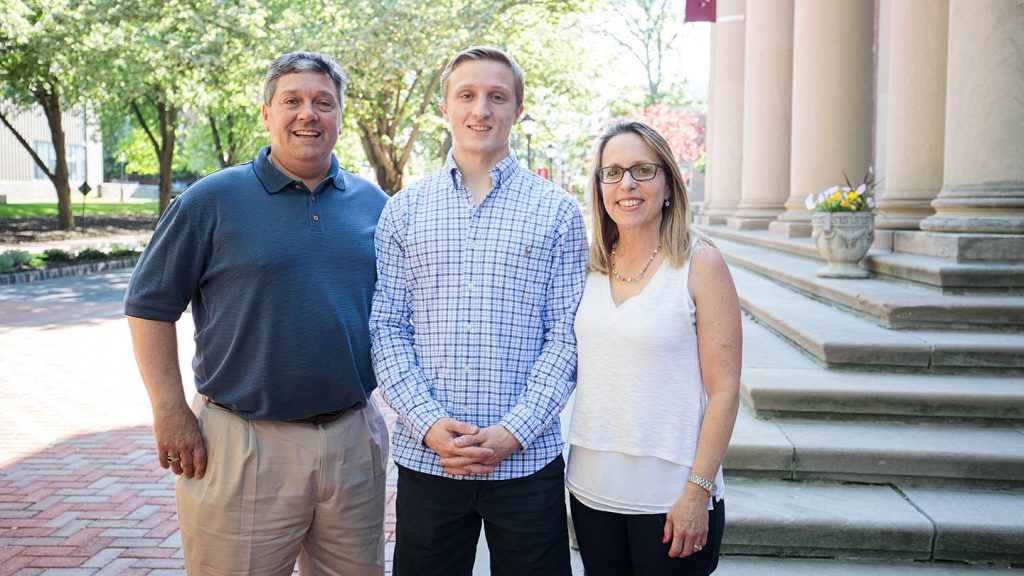 Scholarship recipient Christian Combi will attend Lafayette in the fall, following the footsteps of his parents, Mark and Cynthia.

“The name Lafayette is all over our house: banners, comforters, chairs,” says Christian’s father, Mark ’86. “We may have unintentionally brainwashed him at an early age about going to Lafayette.”

Truth be told, there was no parental pressure on Christian to choose mom and dad’s alma mater. Other finalists included Vassar and Rensselaer. He weighed factors like continuing to play lacrosse, size of the student body, and way he felt walking across campuses. In the end, “I wanted the best academic fit, and this just feels like home to me,” Christian says. He’s thinking about trying to play lacrosse as a walk-on.

Christian already knows so much about Lafayette, he could probably be an orientation leader for his fellow classmates when they arrive in the fall. Not only have his lacrosse teams played on Fisher Field, he’s taken one class on campus in each semester of his senior year of high school: Calculus II in the fall and Economics 101 this spring.

“High school seniors taking second-semester, college-level calculus have already self-selected as the best of the best among their peers,” says Carl Hammarsten, visiting assistant professor of mathematics. “Christian is easily among the top 5% of the students I have seen during my time here.”

“Any great college starts by being great in its own backyard,” adds President Alison Byerly. “Some of our most exceptional students come from right here in the Lehigh Valley, and we’re delighted that someone like Christian, who would be an outstanding addition to any college’s student body, will be joining our community here on College Hill.”

The new Lafayette–Easton Scholarship joins ongoing efforts that typically provide more than $1 million in any given year to Lafayette students from Easton’s three ZIP codes, who receive need-based aid, merit scholarships, athletic aid, tuition remission, or other forms of assistance.

Christian’s dad (a lawyer) and mom (a chemical engineer) knew early on that their firstborn child was a born problem solver who would find his passion in the world of engineering. Everyone remembers differently a story from when Christian was about 3 or 4 years old. It was either dad’s keys (Christian’s version) or Christian’s ball (mom and dad’s version) that fell into a storm drain. In both versions, the child is the one who figured out how to retrieve the lost item.

Christian took apart an inoperable snowblower and put it back together: It worked. On a family vacation to a wildlife preserve in Florida, Christian was the only child not playing with the fish in the touch tank; he crawled underneath the table to see how the water got pumped around. In high school, he built a prototype device to clean and dry athletes’ pads, the sweaty versions of which he and his teammates typically just toss into their lockers after practices and games. He spent a summer building homes with Habitat for Humanity, soaking up as much knowledge as he could from the retired plumbers and electricians he worked with.

He’s a midfielder on the lacrosse field and gets more satisfaction from preventing goals than scoring them. Christian’s size (5 feet 8 inches, 150 pounds) precluded scholarship offers from Division I schools, but his academic and athletic performance earned Christian the Scholar Athlete Award and Sportsmanship and Character Award from the Eastern Pennsylvania Conference. “He’s a kid who gives you 100% 100% of the time,” an athletic trainer once told Christian’s dad.

So, how does a story about a scholarship-winning high school graduate include only one quote from the honoree himself, even after he sat for an hourlong interview?

“I wish he’d promote himself more, but he is who he is,” explains dad.

Says Matt Hyde, Lafayette’s dean of admissions: “Christian is an extraordinary reflection of what we want in our Leopards—wickedly smart and dynamically engaged, but humble with a depth to his maturity and character that puts others first. While Christian strikes me as someone who shies away from the spotlight, he absolutely deserves it, and I can’t wait for him to light up our hilltop in the years to come.”