Rachel Marbaker ’19 enjoys traditional knitting with needles and yarn, but her choice of fiber changes when she transitions to her academic pursuits.

Interested in biomedical research and experimental-based engineering, she asked Brent Utter, assistant professor of mechanical engineering, in the summer of her sophomore year about research possibilities.

“He showed me this shape memory material that changes shape when it’s heated,” Marbaker says. “It acts like a muscle.”

Knitted together in traditional patterns, a strand of nickel-titanium fiber slightly thicker than a human hair can be used to create an active textile that, after being crumpled, can spring back into its original shape when heated. In its inert state, it looks like Space Age chain mail. 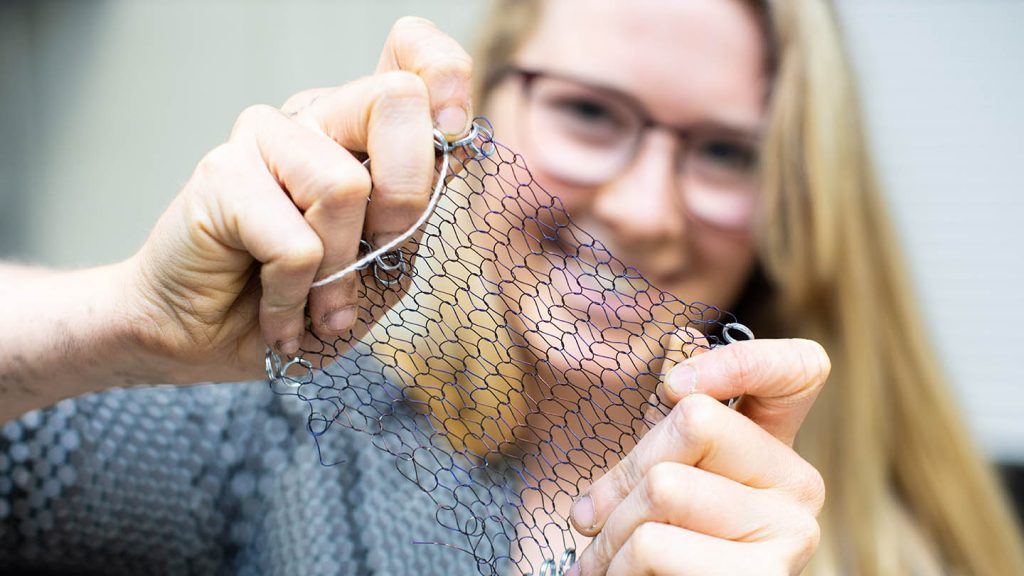 Marbaker developed a memory material that can be used to create an active textile that changes shape when heated.

Marbaker (mechanical engineering and mathematics) has been working with Utter for three years on the memory material as a Clare Boothe Luce scholar, an independent study student, and a senior honors thesis student. Most recently, she received a National Science Foundation Graduate Research Fellowship Program award and will join a biomechanical and neuroscience lab at University of Colorado–Boulder. Her goal is to stay in academia and teach.

Through the National Science Foundation’s Research Experience for Undergraduates, she also investigated split-belt treadmill walking therapies at University of Delaware, looking at ways to improve the gait of stroke patients. The treadmill was designed to change speed slightly at a specific time during the gait cycle, encouraging the walker to push off harder with his or her foot.

In collaboration with a lab at University of Minnesota, she and Utter are working on the knits. “A big part of that is understanding how the knits move and what changes when you have loops of the material interlocking with each other,” says Marbaker, who spent the last two years building a device to measure the movement of the textiles. 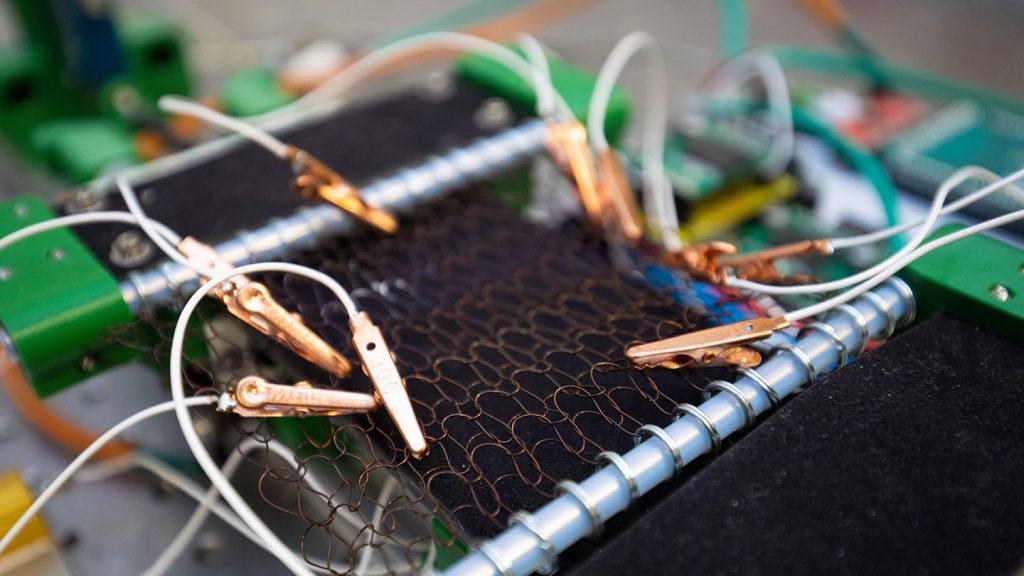 Marbaker spent two years building a device to measure the movement of the textiles.

When Utter aims a heat gun at the fabric, it begins to react, almost wiggle, as if it’s sentient.

“When you raise the temperature it changes phases,” Marbaker says. “In that phase change, the fabric stiffens and returns to a set shape. When it’s heated, the wire filament tries to return to a straight shape, and the rows of the knit get shorter.”

The practical applications are far-reaching.

Shape memory alloys can be used to build wheels that will instantly recover when they roll over rough terrain. They’re used in airplane wings, changing shape in flight. In orthodontics, they can be used in braces. Medical applications include stents because of their ability to spring back after being compressed, enabling surgical implantation. They go into the body, get actuated by the body temperature, and deploy.

“This material is environmentally robust,” Utter says. “It forms an oxide layer that makes the material biocompatible.”

Marbaker is studying its use in compression garments, which can be used in medical, sports, military, space, and cosmetic applications. As a result of her research contributions toward activating the knitted textiles electronically, knitted textiles are a big step closer to being adopted for this range of applications.