The summer before Amanda Scherb Grey ’13 started as a first-year student at Lafayette, she attended a welcome reception in northern New Jersey. Hosted by two married grads who had met at the College (one became a doctor, the other a lawyer), the event introduced incoming students and their families to local alumni, current students, and fellow classmates. Grey had such a wonderful time, she vowed to return the favor.

June 30 was the third time Grey and her husband, Adam ’14, hosted a Lehigh Valley welcome reception at their Easton home.

“This is a very special event for me, and I hope that Adam and I are able to make the incoming students and their families feel welcomed into the Lafayette family,” said Grey, who is transitioning from a career in politics to finance. “It is such a special group to be a part of, and I feel so grateful that we have been given the opportunity to open our home and spread our Lafayette pride to the next generation.”

The backyard of their arts and crafts-style home was festooned with Lafayette banners, flags, and maroon-and-white streamers. Roughly 50 Pards, including 10 new ones and their families, mingled beneath a white tent while noshing on a buffet of salads, sandwiches, and fresh fruit. A game of quoits was in full swing beneath a sun-drenched sky, presenting an unassuming way for area first-years to begin their journey through the next four years. 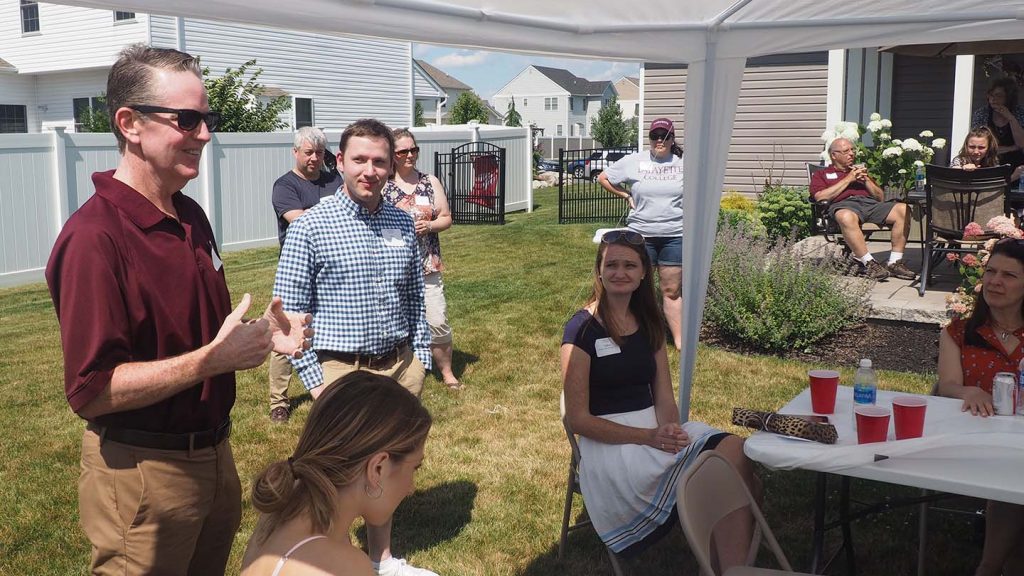 Greg MacDonald, vice president for enrollment management, speaks to incoming students and their families at a Welcome Event hosted by alums in Easton.

Sitting at a table with his parents, Nathan Kornfeind ’23 of Emmaus said he looked at six or seven schools before landing at Lafayette, the last school he visited. “We thought he was set on St. Joe’s, but when he bought a sweatshirt from Lafayette we knew he had changed his mind,” said Kornfiend’s father, Paul.

So why the switch?

“I’m looking to study government and law, and Lafayette has the Kirby Hall of Civil Rights,” Nathan Kornfeind said. “I was really impressed that there’s an entire building dedicated to government. It seemed at other schools the humanities were off in a corner.”

Gateway Career Center and the College’s strong alumni network also made an impression on the Kornfeind family. “I think we felt they will help him get a job when he graduates,” said Kornfeind’s mother, Mary.

The humanities also played a role in the decision by Jack Robinson ’23 to attend Lafayette this fall. “I was looking at top engineering schools and came across Lafayette,” said Robinson of Pleasant Valley. “But when it came time to pick, I decided to go with a liberal arts school that had other disciplines to make me a more well-rounded person and engineer.”

Robinson’s father, Ken, noted Lafayette’s campus is smaller and more intimate than other schools they looked at and will be a good fit for his son’s personality.

“When I visited Lafayette it felt like it could be my home,” Robinson said.

Lafayette was the first choice of Chris Galasso ’23, who plans to double major in English and psychology and then go to law school to become a criminal lawyer.  “I applied to Lafayette and another one just so I could say I applied to more than one school,” he said.

His introduction to Lafayette, however, was by happenstance. During sophomore year in high school, he took a college guidance course, and one of his friends did a presentation on Lafayette. “I was like, ‘Hey, that sounds pretty cool. I’ll check it out.’ I visited campus twice, attended Leopard for a Day, and ended up falling in love with it.”

He also wanted a school with a strong forensics team—he was a member of his high school’s—and Lafayette’s won the state championship this year.

The College’s academic reputation and Division I swim team is what drew Natalie Richardson ’23 to Lafayette. “I visited a bunch of times and did an overnight with the swim team, and there is such a sense of community,” said Richardson, a graduate of Liberty High School in Bethlehem who plans to major in biology. “A bunch of friends from high school took a dual enrollment class at Lafayette and said how much they loved it. They said the professors really helped them succeed in class.”

Richardson’s father, Mark, said he and his wife, Noelle, believed it was important for their daughter to make her own decision about where she went to college, but they’re both pleased it’s Lafayette.

“We both grew up in the area and know the reputation of the school, but we really felt it was the best fit for her in how she wants to build her career,” he said. “We were also impressed by the collaboration between professors and students and how professors are interested in their students’ success not just at Lafayette but once they graduate. It also seems they have a very strong alumni network that will help her.”

Sunday’s event was proof of that.

“I love that we can gather everyone here, and students can meet other students and their classmates so they know someone before school starts,” said Adam Grey. “It also gives the parents an opportunity to learn information. They always have a lot of questions.”

This Lehigh Valley gathering is just one of many welcome events held for incoming students and families. For a list of upcoming welcome events, visit Leopard Link. For more information about events for parents and families, please contact Amy Blythe '14, director of parent & family relations.