Like most Americans on July 20, 1969, Robert “Buz” Callaghan intently watched grainy television images as Neil Armstrong descended the ladder on the Apollo 11 lunar module and planted the first human footsteps on the moon.

But the momentous moon landing that gripped the nation’s attention 50 years ago this week took on more significance for Callaghan ’66, who was a member of the design team for the astronauts’ portable life support system (PLSS/backpacks). When he heard Armstrong’s immortal words, he knew all of his engineering skills and countless hours working on the success of the mission helped make the leap for mankind possible. 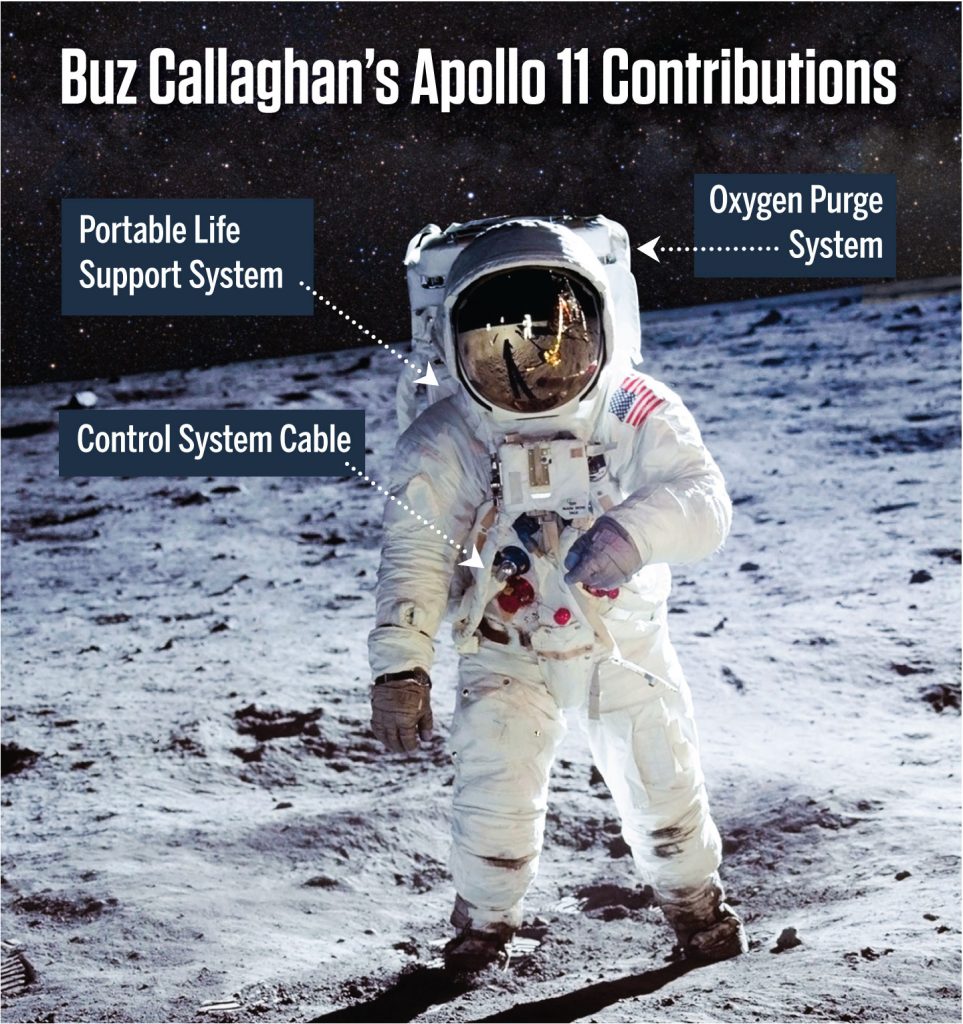 His first job fresh out of Lafayette working at Hamilton Standard, contracted by NASA to build the Apollo spacesuit, turned out to be his most memorable and most exciting, even after decades working as a design engineer. Nothing in the remainder of his career would compare to it.

First assigned to NASA’s biosatellite program (1966-69), a series of satellites to assess the effects of spaceflight on living organisms, Callaghan moved on to improving the design of the backpacks for Apollo astronauts.

After the first Apollo mission, the challenge was to come up with a better design for a connector for the electronic control system to the life support apparatus. The previous design wasted precious minutes on the lunar surface.

Keeping the astronauts safe and comfortable on a lunar surface that could reach daily temperatures of 250 degrees Fahrenheit was no small challenge.

Callaghan, who earned a degree in mechanical engineering at Lafayette and a masters from Rensselaer Polytechnic Institute, with a team of 25 other engineers had to design a tailor-fitted spacesuit and support system that was flexible enough to allow the astronauts to move around the cabin and lunar surface.

The 60-pound backpack that supported human survival on the moon included a sublimator, which turned ice to vapor to chill the air inside the spacesuit, was constructed of multiple layers of aluminum/Mylar blankets. For carbon dioxide removal, the pack also contained a system to remove carbon dioxide by pumping the astronaut’s breath through a canister of granulated lithium hydroxide.

Callaghan also worked on a second, emergency breathing system capable of sustaining the astronaut for about 60 minutes if the primary system failed or during a longer moonwalk. The system was used for the later Apollo 15 lunar rover program.

“If you take a look at the pictures, you’ll see another pack on top of the backpack to hold these two oxygen bottles,” Callaghan said. “It increased the weight of the pack considerably. One of my tasks was to design a mechanical device to connect the Oxygen Purge System box on the top of the PLSS cover, which was honeycomb covered with layers of fiberglass.”

Yet another challenge was designing the backpack so that it had the proper weight and strength so that if an astronaut would fall over backward on the moon, he could roll over and get back up without damaging the pack, he said.

Armstrong, the mission commander, later remarked that the combination of spacesuit and backpack “operated magnificently.”

The engineering world was never quite the same for Callaghan after he left Hamilton Standard as the Apollo program began to wind down. 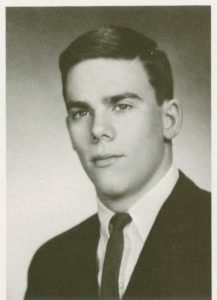 “It was an entirely different engineering environment,” he said. “I finished my career as an engineer and was frustrated that we lost that mentality of design perfection. Now you make it and break it. Back then we had to design so that we could assure that these people could go to the moon and come back alive.”

Callaghan and his colleagues followed Six Sigma design standards on their Apollo work, which assured 99.99966% reliability through design, testing, or by building in redundancy.

Working under conditions where money was no object “made the environment just tremendous for an engineer,” Callaghan said. “It was a ‘get it done’ environment, whatever it costs. We had a limitless budget, literally millions of dollars a minute when it came to the Apollo mission.”

Callaghan and his colleagues, professionals of all ages working together, 20-somethings right out of college alongside mentoring engineers with Ph.D.s., poured over designs at drawing boards, making calculations with slide rules, the computer of the day.

“There were engineering activities that I never used again, they were so advanced,” he said. “When I got out into the commercial world, it took me 20 years or more to tap into some of the things I learned in my first years. Part of it was the discipline, the other was the specific language associated with the engineering that we learned during that experience.”

Callaghan is not optimistic that the United States will ever devote those kinds of resources to space travel again, even as talk surfaces about a human mission to Mars or a return to the moon.

There was a race on to fulfill President John F. Kennedy’s challenge to place a human on the moon before the close of the 1960s. “It was a focus on that project alone. You worked on the Apollo program; you wouldn’t believe the money that was spent,” he said.

About 15 years after the Apollo 11 mission, Callaghan took his family to the National Air and Space Museum in Washington, D.C. “We came around a corner, and there was the equipment I designed. The thrill of that time came back all over again,” he said.

Asked what he plans to do to commemorate the 50th anniversary of the moon landing— a Tang toast was suggested—Callaghan said he plans to sort through the various mementos from his years working on the Apollo program. 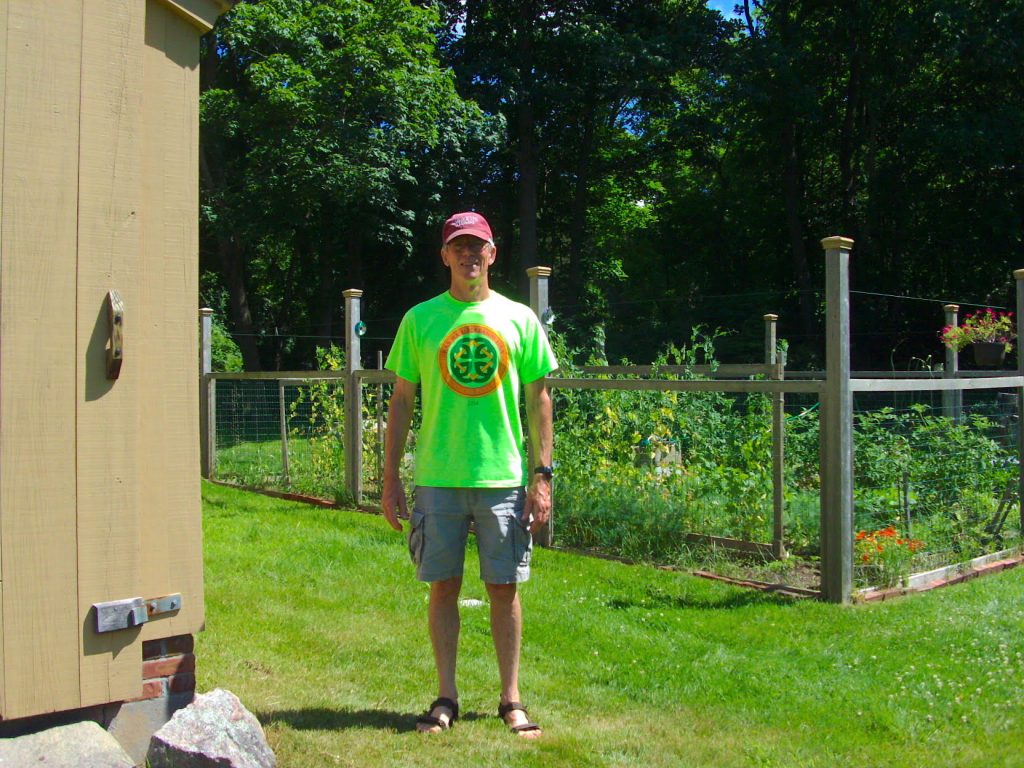 Buz Callaghan by his home garden

“I’m going to dig out my trophies and awards. I got a medal that has aluminum from the command module. I got a little tie tack made to look like the lunar lander,” he said. “The picture I love is Buzz Aldrin (lunar module pilot) standing on the moon next to the flag. My design is over his shoulder.”