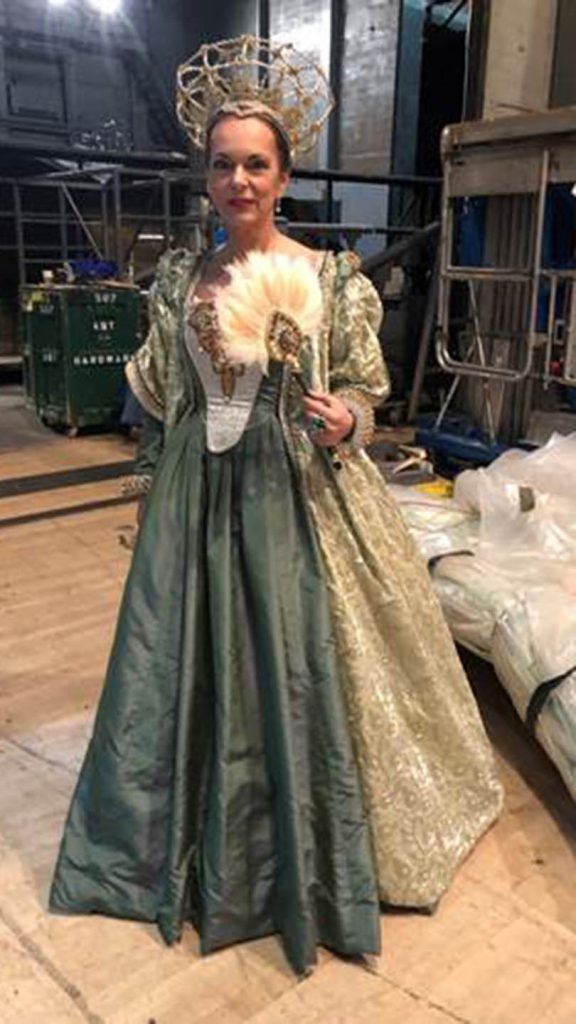 Prof Olga Anna Duhl portrayed the Queen of Hungary during Act III of a recent production of Swan Lake. “I was lucky,” she says. “The outfit fit perfectly. It was initially difficult to walk in, but I adjusted to it very quickly.”

The experience was especially meaningful to Duhl, Oliver Edwin Williams Professor of Languages and co-chair of the Medieval, Renaissance, and Early Modern Studies Program at Lafayette.

“I have a long interest in historical dance and find it complements the study of literature in my classes,” says Duhl, who incorporates dance history into her teachings of French and comparative literature and culture. “Dance is such an important form of communication. It brings people together, and it has been an important part of many cultures.

“It was amazing to see a major part of the performance from the vantage point of the stage. I was able to watch the best dancers in the world perform so close and be part of a story that has been around for nearly 150 years, enthralling audiences with beautiful choreography set to one of the Russian composer Tchaikovsky’s best-known pieces.”

Duhl portrayed the Queen of Hungary during Act III of the world-famous ballet, in which the stage transformed into “The Great Hall” for Prince Siegfried’s ball. Her instructions were to walk on stage with her partner and interact using hand gestures and facial expressions.

During the 25-minute scene, eligible young princesses from various countries danced with Prince Siegfried before Odile, the evil swan and daughter of the sorcerer von Rothbart, seduced him.

“The story of Swan Lake is based on German and Russian folk tales that were blended together, ultimately portraying a Romantic hero in quest of an ideal,” says Duhl, who looks at the political and social contexts that prompt the revival of cultural traditions during any particular historical period. It has been reinterpreted by generations of choreographers and dancers since it was first performed in Moscow in 1877.

“Act III of Swan Lake is not only about the personal quest of a Romantic hero,” she adds. “It provides insight into the development of national identities in the 19th century, as reflected by a variety of folk dances performed in a courtly style at the ball.”

She apparently was a natural. A communication distributed by American Ballet Theater quoted a former trustee of the organization, who commented on Duhl’s performance, “That was the most wonderful stand-in that we have ever had in the ballets. Olga was lovely, cultured, and so elegant.”

More on Swan Lake
ABT shares this description of the performance: “Of all the great classics performed by ABT today, Swan Lake remains the quintessential ballet. The one that defines the standards of the Company, tests its dancers, and ennobles the spirit of its audience. This romantic fable of ill-fated passion, dreamlike transformation, and ultimate forgiveness is set to Tchaikovsky’s glorious score. With breathtaking choreography and visually magnificent sets evoking a Renaissance court, the fabled lake of the swans rises into view, inspiring awe for generations to come.”

In July, Duhl participated in a historical dance workshop at Amherst Early Music Festival, one of the largest meetings of scholars and performers of early music and dance in the country, held at Connecticut College. She performed with a group of dancers, singers, and musicians in #Anch’io (#me too):  Ariadne Tells Her Fury and Her Sadness, a pastiche based on opera scenes by Haydn, Marais, Monteverdi, Conradi, and Handel (Drew Minter, stage director; Gary Thor Wedow music director; Dorothy Olsson and Kaspar D. Mainz, dance directors; Ronnie Snader, costumes; and Paul Guttry, sets and props). “This production gave insight into the continuity of Ariadne’s myth in the early-modern period while also illustrating its relevance today,” Duhl says. “As a specialist of late-medieval and early-Renaissance French drama, I was particularly interested in learning about the Italian Bergamasca tradition and its influence on the development of the comic-tragic Harlequin figure.”

In the fall, Duhl will be hosting another early dance workshop on campus, in collaboration with Professor Suzanne Westfall, who will teach a course on the history of theater.

“Dance is very powerful,” says Duhl. “My students love it. Even if they never had a dance background. They enjoy the music, and the freedom of movement.”