Offering the opportunity to see and experience waterfalls, glaciers, volcanoes, hot springs, and the Northern Lights, Iceland has become a top destination for photographers, adventure travelers, and nature lovers.

But for geologists, in particular, it’s a true gem.

Tamara Carley, assistant professor of geology and environmental geosciences, began studying the volcanoes of Iceland in 2009. “Iceland is a really elegant natural laboratory to explore magmatic stories,” she says. “That’s been my focus ever since.” 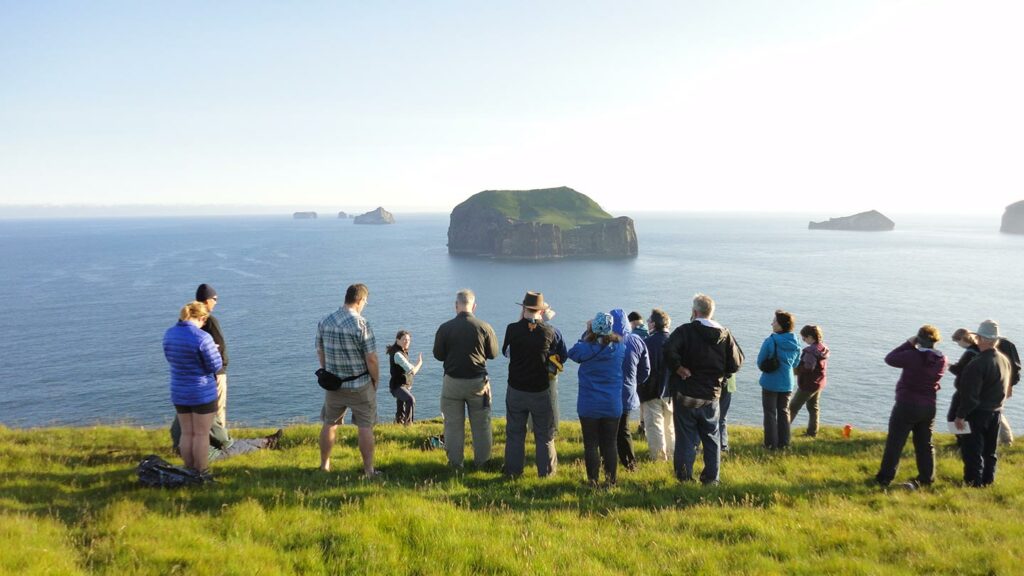 Prof. Tamara Carley delivers a lecture to the 23 tour participants during an excursion to the Vestamnneyjar Islands off the southern coast of Iceland.

This past summer, Carley co-led a 10-day expedition for Geological Society of America (GSA) with fellow volcanologists Brennan Jordan of University of South Dakota and Tenley Banik of Illinois State University. GSA recruited team members for their extensive knowledge of Iceland as both researchers and educators.

In preparation for the GSA-guided trip, Carley began collaborating with her co-expedition leaders a year in advance to determine the itinerary. The trio also co-authored a detailed guidebook to educate the 23 tour participants about the geology of the young, dynamic island.

Narrowing down the itinerary was perhaps the biggest challenge.

“There is so much beauty and detail to appreciate in Iceland,” Carley says. “You could spend months there and not see it all. We had to determine the best way to represent the geologic diversity of the island while working within the constraints of how much we could fit into a single day.”

Carley says one of the highlights of this trip was the excursion to the Vestamnneyjar Islands off the southern coast of the mainland of Iceland. In 1973, an unexpected and devastating eruption occurred on the island of Heimaey, which lasted months and caused temporary evacuation of all inhabitants. Each year, in early July, people gather to celebrate the end of the eruption.

“It was a lucky coincidence that we were visiting Heimaey on the anniversary weekend of the end of the 1973 eruption,” Carley says. “It was very moving to see the solidarity and resiliency of a community that had endured such an impactful geologic event. We left with a new appreciation of what occurred there.”

That human element continued to be a highlight for Carley throughout the tour. Attendees, all GSA members, each brought with them a unique background, interest area, and set of skills, which Carley says elevated the entire experience. 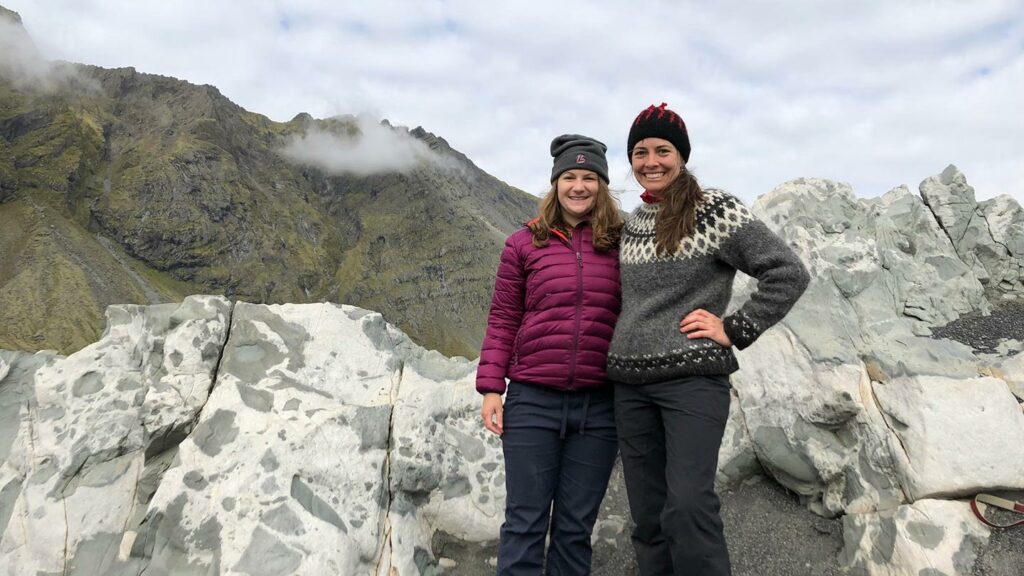 “Each person came with different perspectives that they offered to the group,” she says. “There was an economic geologist, a woman who studied arctic plants, a mechanical engineer who was able to add insights about the geothermal power plants on the island, and some serious birdwatchers. I really enjoyed their diverse interests and insights. It really enhanced the conversation.”

One person in particular Carley was thrilled to have along was Amanda Leaman ’15, who was Carley’s first Lafayette thesis student.

“Amanda did her thesis project on an Icelandic volcano, so having her there was very special,” Carley says. “It was wonderful to see how far she’s come and hear about the great work she’s doing” as a forestry technician for USDA Forest Service in Uinta-Wasatch-Cache National Forest in Utah.

Back on campus, Carley and her students are continuing their investigations of Icelandic volcanoes. Lissie Connors ’18 recently had a paper accepted for publication in which she explores how a mineral called apatite can be used to understand Icelandic magma systems. Ed Ruger ’20 and Isabelle Rein ’20 are building on Connors’ findings.