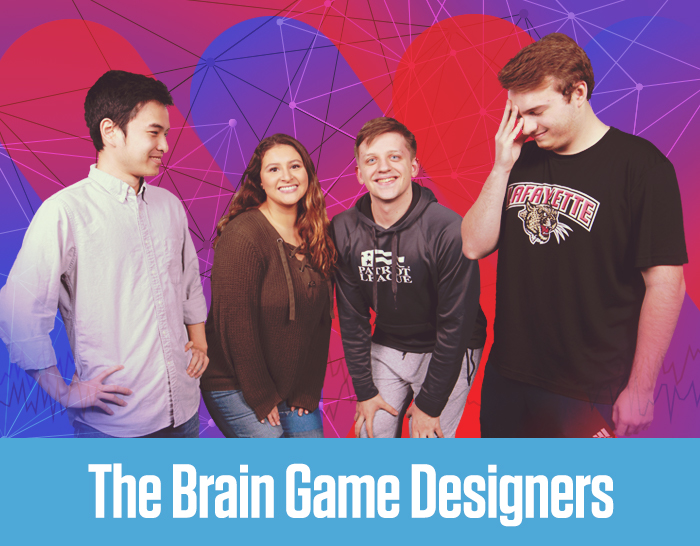 Qiu, Giuliani, Miller, and Martin (pictured, left to right) created a computer game that can train people to use their imaginary hand movements to control devices through brain-computer interfaces. Their game involves controlling a diver to collect treasure chests; each user attempts to retrieve 11 of them.

Their project, supervised by Prof. Lisa Gabel, chair, neuroscience program, and Prof. Yih-Choung Yu, head of electrical and computer engineering, evolved to where the same kind of brain-computer interface can allow a person to control a motorized wheelchair without relying on peripheral muscles.

“When you imagine movement, the same patterns or brain waves emerge as if you had actual movement,” says Miller, inspired by the promise of the technology in Gabel’s First-Year Seminar, Melding Mind & Machine. “So if I think about doing it, the same pattern emerges.”

An EEG electrode cap, a critical piece of equipment in the project, records electrical pulses from parts of the brain that control movement. “To capture the signals produced by the voluntary movement of different body parts, the electrodes must be placed at specific locations within the motor area,” Giuliani explains. “Since the direction that the diver moves in is controlled using imagined motor movement, it would be possible for someone with little to no voluntary movement to play this game. Looking ahead, we hope to integrate the use of the EEG cap with a mechanical wheelchair, so that users will be able to control the orientation of their chair with imagined motor movement.”

As an emerging neuroscientist, Giuliani brings specific skills to the project and knows what brain signals need to be processed. She’s enjoyed working with her electrical and computer engineering colleagues. “Working so closely with the engineers has been a great opportunity to bridge the gap between my knowledge of the conceptual and technical aspects of neuroscience,” Giuliani says. “It’s been very enlightening to gain a deeper understanding of the ways in which technology can be used to generate progress within the field.”

Martin says a lot of the work involves processing and calibrating brain waves. “There’s a lot going on in the brain electrically, so you get a lot of background noise from muscle movements,” he says. “That needs to be filtered out to focus on the parts of the brain we want. Once we have this reading, it’s tuned to specific people. Everyone’s brain waves are unique.”

What’s exciting them? “It’s an accessibility device that will provide more freedom,” Martin says. “We’re creating a wheelchair to be used by people who could not control a conventional one. The possibilities for rehabilitation centers, hospitals, and private care are endless.”

“Those with disabilities will be able to live more independently,” adds Giuliani.

“People with disabilities who can’t move their hands or legs can now control a wheelchair with their mind,” Qiu says. “That’s just amazing.”