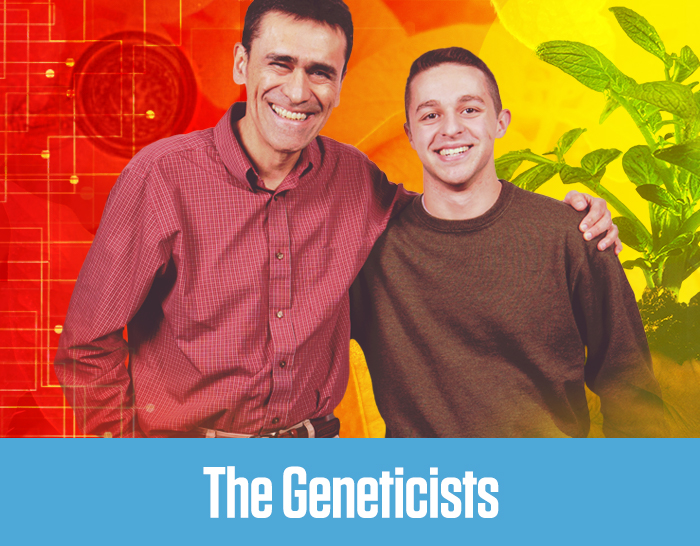 Ospina-Giraldo and Jainchill are on a mission to better understand Phytophthora infestans, a fungal-like organism that is the causal agent of “late blight,” a plant disease most commonly known for the Irish potato famine in the mid-1840s. Late blight is still a threat to potato and tomato industries worldwide, and crop losses and costs to control this disease are estimated to exceed $1 billion annually. In the lab, they are focused on investigating how the pathogen enters the plant, which Ospina-Giraldo says is the critical step. “Once the organism penetrates the plant, there is nothing you can do. You need to prevent it from happening in order to protect the plant and stop the disease.”

After taking General Biology and Molecular Genetics with Ospina-Giraldo, Jainchill approached the professor about research opportunities. He was fascinated with Ospina-Giraldo’s field of study, and in particular, “how a more in-depth understanding of the molecular biology of the pathogen can lead to better mechanisms to control plant diseases.” He joined the Ospina-Giraldo lab in 2018 as an independent study researcher—during which time he was able to contribute to a manuscript. Now he is continuing his work as an EXCEL Scholar.

“The most exciting part of this research has been learning the techniques used to study early expression of these genes linked to pathogenicity,” says Jainchill, who also works as a teaching assistant for General Biology and Molecular Genetics. “A rewarding part of my research has been developing hypotheses for genes we suspect to be involved in infection and determining whether our hypothesis can be supported with the data I collect.”

Ospina-Giraldo says it’s great to see Jainchill’s skills grow both as a research assistant in the lab and as a teaching assistant in these classes. “I think that mentoring students is the pinnacle of a career,” he says. “My lab really works as a team. We are all working together toward a common goal. The students rely on you, but you also rely on them. The good thing is, with students who are as driven as Dylan, you really can rely on them. It’s why I love what I do.”